Back Off Grid In A Modern Prefab House! With Mid-Century Modern Scores. 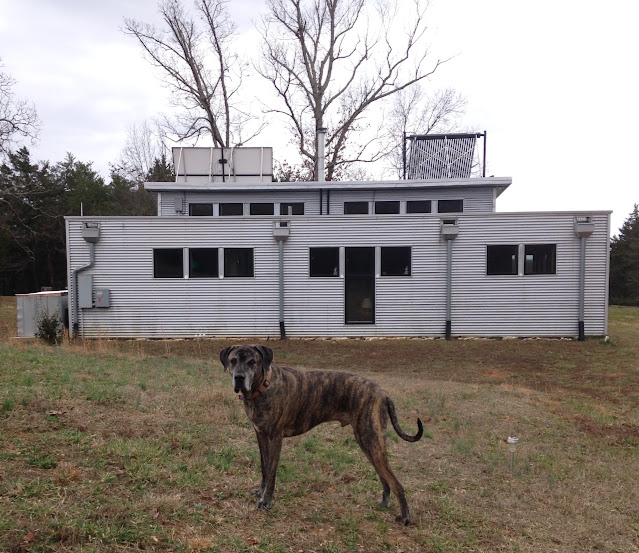 It is so good to be back at the passive solar off grid prefab home. 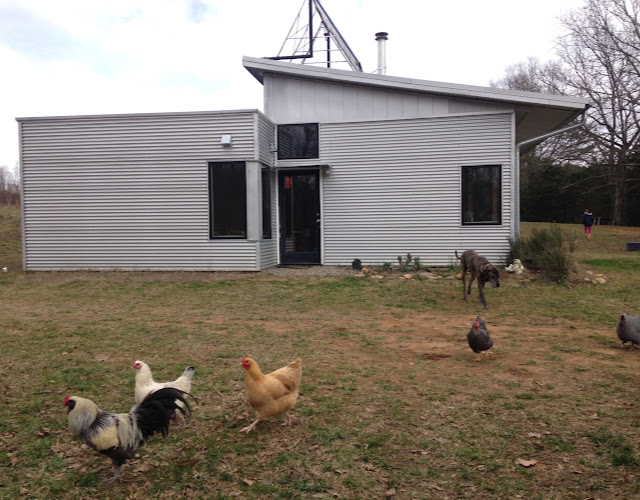 Sooooo. What's it like to be gone unexpectedly, nearly three weeks in winter when you live off grid? 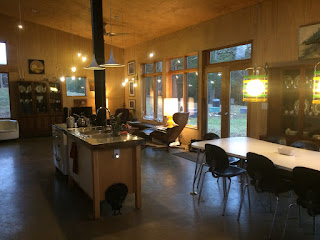 Welllllllllll, as you know, the modern prefab has a cook stove usually humming in frigid temps to the point where we're often overheated thanks to the energy efficiency of the house.

But it is winter and we've been gone. GONE. NOOOOOOone here. From what I can tell, the temperatures averaged in the 40s during the day, then 20s at night. And the off grid house sat for weeks. In gray, dreary weather.

We arrived late morning, and thanks to the energy efficiency of the SIP and passive solar design, the off grid prefab house was a cool 59, but y'all: IT WAS 59 after frost on the field and ice on the water troughs.
I fired up the cookstove. 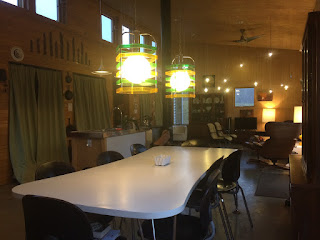 Starting with a cool house, like any home whether it be on- or off-grid, it takes awhile to get cozy but we were never uncomfortable- by night you could feel the heat warming all rooms of the house. But it still wasn't toasty. There's a lotta square footage to heat with one tiny firebox! But I am typing in long sleeves and jeans and I'm fine.

Being back, you'd think after nearly three weeks of city living we'd miss the amenities, but it is so comforting to be home after all those doctor, hospital, and ER visits.

The first thing I did was start the cook stove. Then, once it was going, I threw out hay and feed and fell into a deep sleep. All those hospital visits and stress had taken its toll.  Late afternoon I awoke, and still exhausted, stumbled into the field, and we rejoined the herd.

Then I headed over to the wood shed and stacked wood (wow, the wind gusts must have been AMAZING! Our pasture cams showed us how insanely windy it was, gusts of 20+ knots, but it was wild to see firewood fallen!), then headed inside. It was so good to be home. 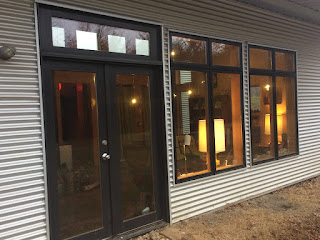 Here's where we get to the mid-century modern part.
First, let me emphasize how much I *abhore* shopping.

We unexpectedly spent almost three weeks in the city, in and out of hospitals, ERs, and doctors' appointments with a scared child diagnosed with alpha gal whose body is reacting to everything. 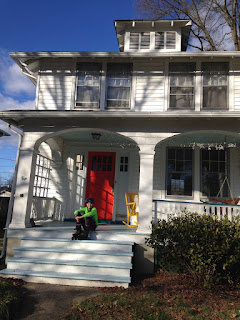 The City House, which I rarely mention as it is neither off grid nor a modern prefab, is where Handsome Husband can safely rest his head when not telecommuting from the off grid prefab, and where we stay when seeing friends.  It came about after realizing that instead of throwing (so much!) money away on DC rent to keep Handsome Husband safe during work days when he could not telecommute, instead of dangerously driving from DC through black ice and deer to the off grid prefab, we could, for about the same amount of money, pay a nearby city mortgage, thus not throwing money away. Now he gets on a train to DC, opens up his laptop, and *boom* is putting in work hours while the train safely commutes him to his face-to-face meetings.

That City House, that we thought we would then sell in a year, went from "let's toss the IKEA furniture from the DC apartment in to it and call it a day; the mattresses can sit on the floor who cares about beds, we'll probably sell this house soon..."
to
"...and now the kids are entering their teen years and want to see hordes of other kids so we need to come here often..."
to
"...we can not go home, because we have been to the ER five times in one week. We are here... indefinitely."

It was time to move in a little more to The City House.
When we weren't with doctors, we were SO cooped up! But Pip 2 had little energy for activity. So I would take Pip 2 on quick 20 minute excursions to thrift stores, antique malls... it served to get us out of the house, get her mind off things, and hopefully, if we were lucky, we might find one or two scores...

I always have a list in the back of my mind of "stuff to look for" when antiquing.
Here is what is currently on my list:
- fondue plates because: fondue! I love fondue!
- flatware, cool, modern to replace the flatware we've always had (that can be set aside for the Pips for *their* apartments) because it's functional but boring
- a dresser for Pip 2
- a more grown up bed for Pip 2

Looking for a dresser, when Pip 2 was feeling more stable we would try to distract her with short scouting trips to local thrift and antique stores. (Remember: we're *just* looking for a dresser.)
And look what I found: a rug that looks JUST LIKE our beloved dog! EEEEP! 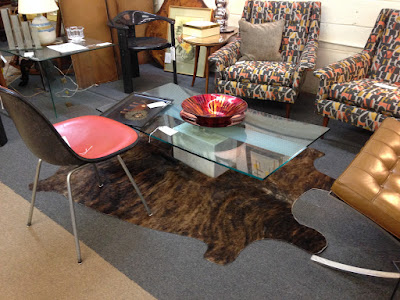 Look what I found! Cool bronze and rosewood flatware by Jean-Claude! Fantastic! Recycled to our home for less than I would pay for an ugly pattern set of 12 at Walmart! Mid-century AND modern! And I have been looking for flatware for months but couldn't find anything "just right" that was new! I love that it's *perfect* -and- reused, and for the same price if I bought something I hated!

LOOK WHAT I FOUND: Quite possibly my BIGGEST thrift find EVER:
A perfect condition mid-century modern hutch- the rare and beautiful Mainline by Hooker Furniture, produced between 1950-60s, Danish-inspired USA-made, selling for thousands and thousands of dollars when you can ever find them, for... $150. 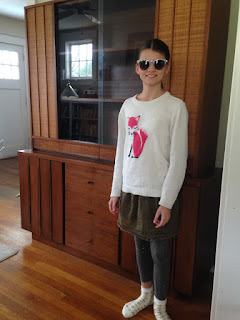 Earlier this year, Handsome Husband found a vintage white wicker bedroom set for $200 to get our mattresses off the floor in the city house! Fantastic recycling! But... white wicker is so not me... but it IS Pip 2! So we moved the wicker into Pip 2's room. She was thrilled! 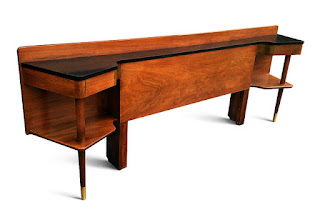 Oh, and *another* Mainline piece (what are the CHANCES?), a gorgeous dresser... 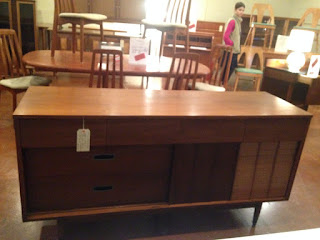 Ok this is a terrible picture so I found a better picture on the internet: And, yes, about that dresser for Pip 2 which is why we made all these excursions in the first place...
We found a dresser.
BUT IT'S NOT AN ORDINARY DRESSER. It's a desk repurposed into a computer table and drawers! 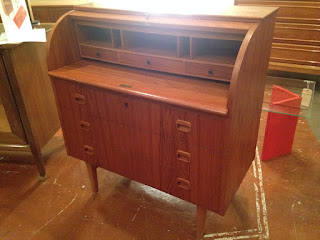 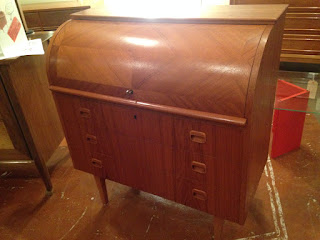 "This is a winsome mid-century modern secretary desk by Egon Ostergaard.  The desk hails from Sweden and is constructed from teak.  The roll-top features bookmatched graining in a diamond pattern.  The front has a brass keyhole and lock with its original key.  The interior has an assortment of shelves, cubbies and drawers with an extendable work surface.  The bottom boasts three drawers with elaborate graining and inset teak pulls.  The top drawer has a brass keyhole and lock with a second original key.  Teak stretchers and tapered legs complete the Scandinavian design."

Through all the panic and medical mystery over the past weeks, I really want to thank our friends. One friend took care of all the animals for almost three weeks on no notice! Almost three Wednesdays ago, we thought we were rushing to the allergist  a child who couldn't eat and was reacting to not just alpha gal triggers but *everything.* We thought we might spend one night in the city and be back the next day. We never came home. We are really, REALLY grateful for everyone who stepped in to help, even if to stop by the City House for a glass of wine to lift our spirits without overtiring the child.

Other friends sent a gift I want to mention because it's so cool- if you like art and science then you will enjoy NeoLucida:

Thanks to the W's, Pip 2 was able to be distracted with the NeoLucida, hence it was an invaluable gift. Pip 2 *loves* to draw and this is a great tool where she can combine accuracy with creativity. I can't wait to have my own turn on it! 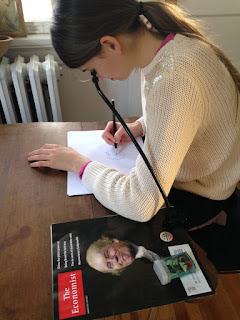 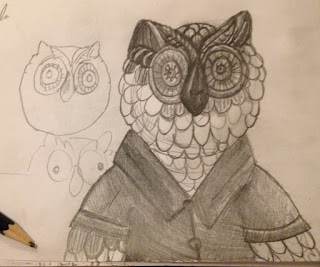 So. We are back at the modern off grid prefab house. It was great to be reunited with the equines and fowl.
We are still settling in and awaiting labwork.
But we're home. 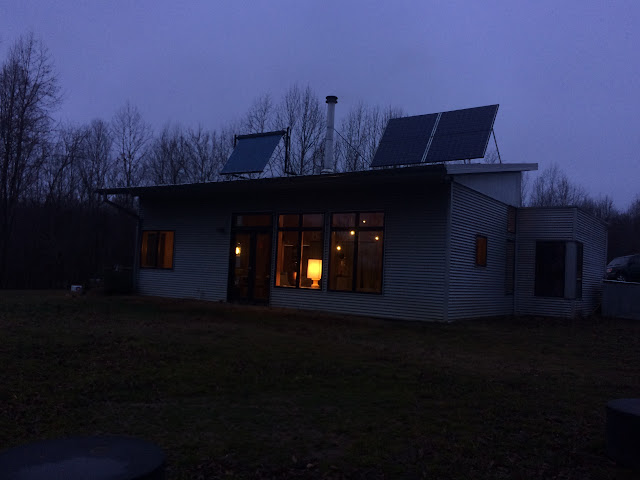