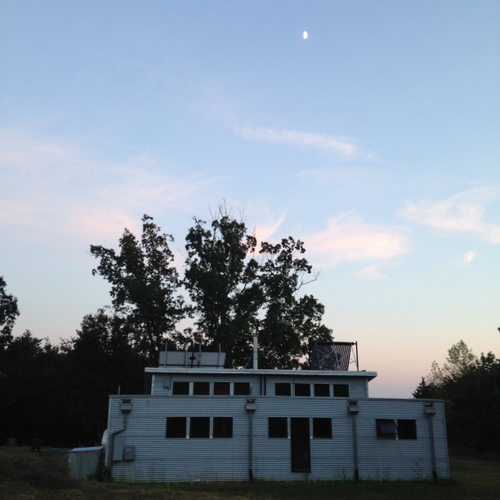 With our return to the passive solar off grid prefab house, came the first day of school.

The Pips dressed, hurriedly headed out the door, and I, misty-eyed, snapped quick photos...

...and then told 'em to get back inside and GIT TO WORK.
A long school commute we have not.

However, did you know that in our rural farm county there are kids that take the bus for over an HOUR each way to get to school?  On our road, the bus does not pass by us until after 4:30. So the Pips do appreciate the afternoon recess they have vs. travel.

We are still settling in at the off grid passive solar prefab homestead- so many summer chores we leave undone to go back- and-forth to the bay, so now we buckle down and mow, mow, mow, and stack stack stack weed tree wood that is valuable for burning, like the evil, invasive ailanthus altissima, often known as ghetto palm.
"... It is also considered a good source of firewood across much of its range as it moderately hard and heavy, yet readily available."

We have found it burns fast and hot- good to start a steady fire with but not a true hardwood. It is truly horrible to native species... and we try to eradicate it as possible.

Mid-week, the equines returned from their Auntie C's where they had stayed in the season of back-and-forth. Home seemed so empty until they joined back with us and we were back as our regular herd. 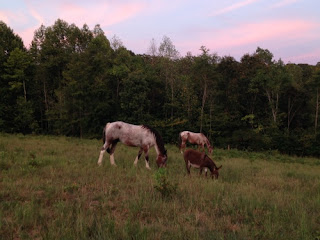 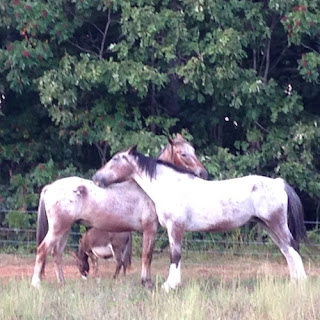 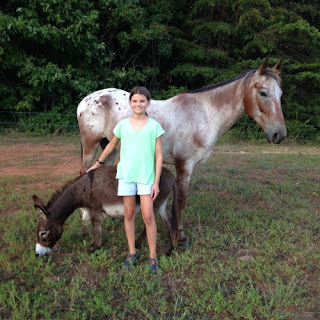 "I know you want to ride but let's just let them settle in, plus it's too dark and you are in slippers with no tack and they haven't been ridden in three months..."
But by then, he, and she, were gone. 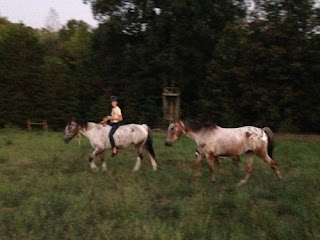 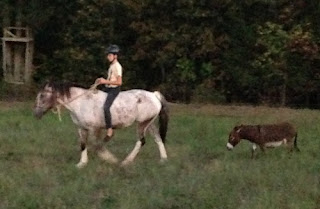 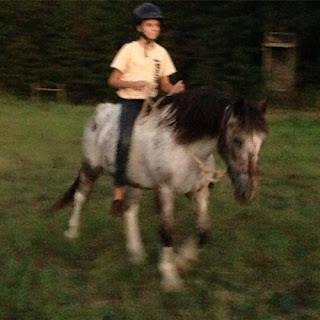 Daylight Stars In Our Eyes
I was standing along the field talking to C., glancing at the horses, so when the "rocket" "comet" whatever streaked down, I had a full, 100% view. C. saw it from the corner of her eye, but at least got to see it. Now, I have seen plenty of meteors, and how they streak across the sky at night. Nope, this was DAYLIGHT, and it, burning, went down. It was so different. No impact explosion, it just... burned like something you'd see in a mid-century Johnny Rocket comic- a bright, solid silver ball with a tail of orange and silver. It was beautiful.
Here's kind of an example, except imagine it being this bright and vivid IN DAYLIGHT:

Here is the story-
"A fireball is another term for a very bright meteor, generally brighter than magnitude -4, which is about the same magnitude of the planet Venus as seen in the morning or evening sky. A bolide is a special type of fireball which explodes in a bright terminal flash at its end, often with visible fragmentation. " --The American Meteor Society

I was grateful to see this once-in-a-lifetime meteor!
Thinking on environment, it made me also consider space junk-

Meanwhile, Back At The Off Grid Prefab House... 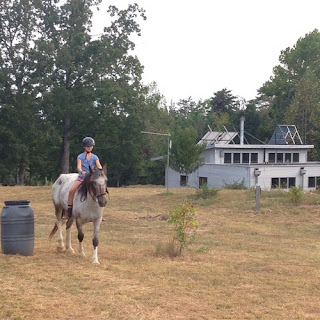 Leaving a town on the bay fighting over water to return to the country where there is a drought makes me reflect on our rainwater cistern and system. It's certainly not going to produce water in a drought, duh, but I was impressed on how full our cistern is vs. the pond which is at the lowest point I have ever seen. When we went away for back-and-forth to the bay, thus not using water as much, that precious spring rain was stored and is now available for us. Thus it occurred to me that it really is great to have a combination of well and rainwater collection for areas with water issues- this would be taking a lot of strain off of any wells with low water tables which might really benefit the bay area people, too, with existing wells...

But is your water safe?
A friend raised the issue of cancer clusters this week and I think the bigger question is why is it ok to poison the land, thus, community with pesticides / toxic chemicals? I would recommend water testing, regularly, regardless of where you live.
To de-stress over all this, Tiny has taken up yoga.
You can see it works pretty well - here he is doing the Downward Dog. 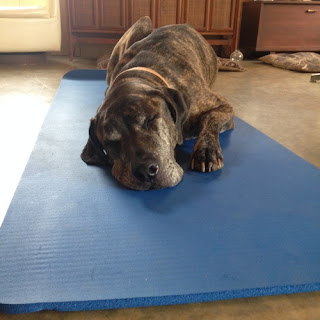 I am back to solar cooking most meals. 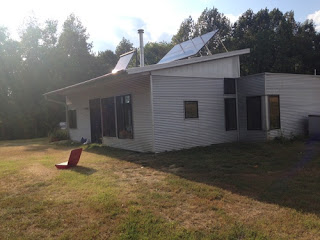 This week I've been solar cooking a lot of eggs to have on hand to add to recipes or put on sandwiches without using the propane camping stove.

Here's an example where I had taken the time to cook bacon, onion, and create a carbonara pasta during cook stove season, froze it, then reheated it this week in the solar cooker to then embellish with green beans and a freshly-solar cooked soft egg: 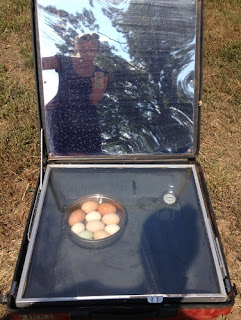 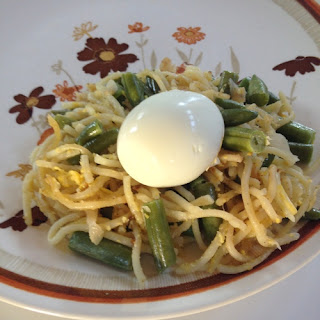 And a recipe:
Canary Melon Peach Jam
Make jam but with 1/2 canary melons. The Pips *love* its taste- not as heavy as regular peach jam, with hints of honey / honeydew.

Anyhoo. Darkness falls. Katydids and tree frogs sing after long dusk moments of equine hugs... we listened to wild turkeys heaving themselves into trees to roost as nearby, chickens settle in. And now, the wind... it's a good night. 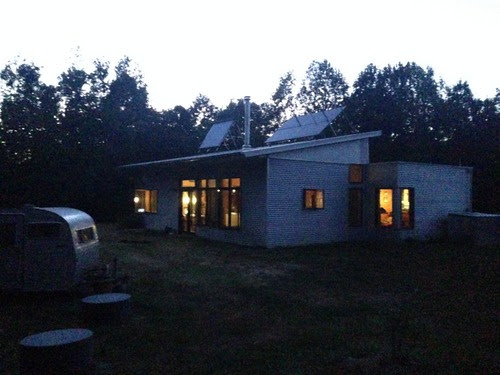 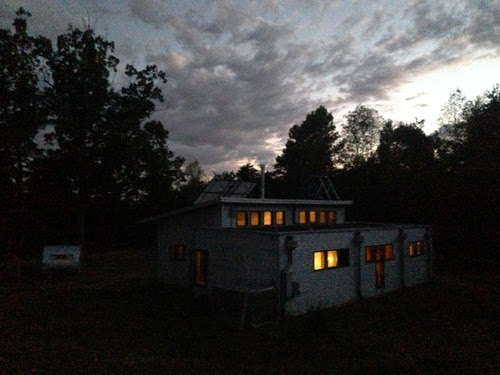 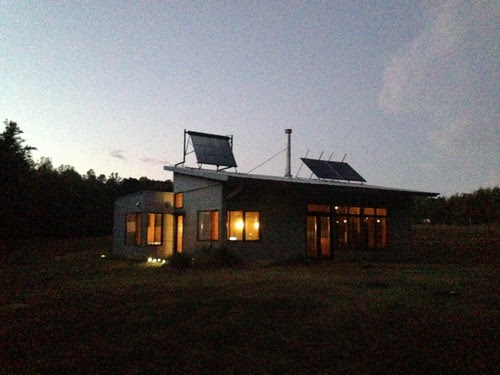