Just Miles From The Off Grid Modern Prefab House The Tornado Hits Hard. 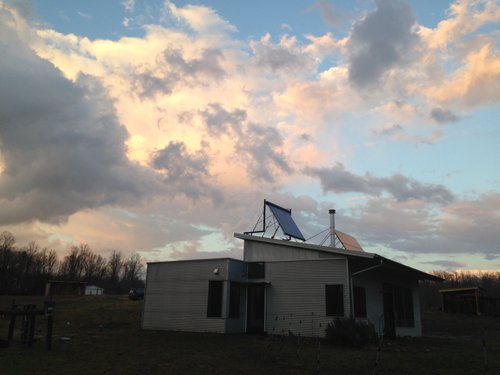 I don't know what to say.


One minute I was nervously joking about how glad I was to live in a SIP house with the the tornado watch alert that had just gone out... 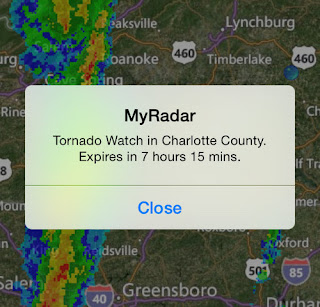 The sky roiled.
I watched the clouds move south to north AND west to east, and then it started merging... 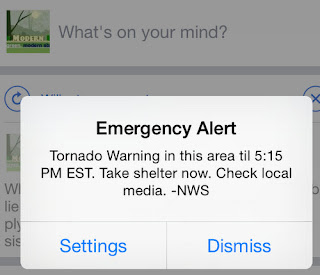 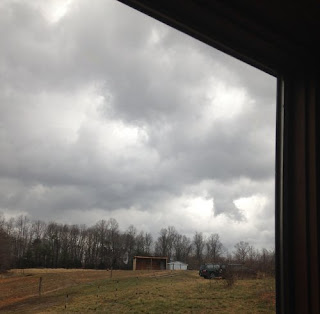 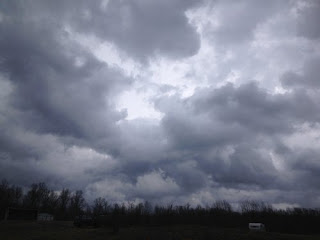 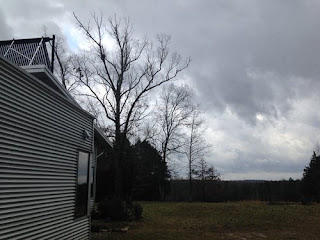 Lightning started cracking and striking, rain began to come down in sheets, sideways, and... is that... OH MY GOSH HERE IS THE HAIL bouncing off the roof...

The kids got in the tub.
You may recall we have been working on some indoor projects, finishing walls with plywood... I grabbed the plywood and covered them.
Minutes passed. They fidgeted.
When your mom tells y'all to get in the bathtub, lie down, and cover yourself with a sheet of plywood, that does NOT mean moon your sister. 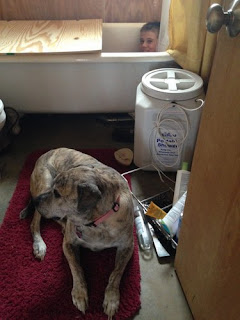 The rain, hitting sideways, was so strong, the pressure so great, that it came in through the cracks of the front door frame- gallons of water it seemed- CRAZY that it could force itself through the door frame!!!! (Something we will need to address this weekend.) 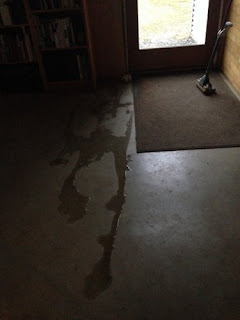 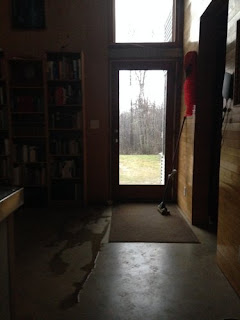 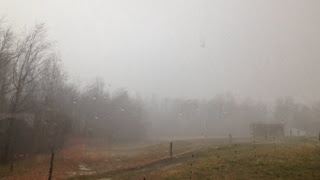 The EF-3 tornado missed us but Red House and Evergreen, just 5 and 8 miles away, took a direct hit.
"EF3 Tornado. Wind speeds between 136 to 165 mph (218 to 266 km/h) Severe damage. Roofs completely torn off well-constructed buildings, along with some walls, majority of trees uprooted, trains overturned, vehicles lifted off the ground."

Images of the devastation left behind from yesterday's tornado that hit Appomattox County. In my 20 plus years of...
Posted by Crystal Image on Thursday, February 25, 2016

A friend's child was home sick from school when the tornado hit.
Appomattox Teen Thanks Painter for Saving His Life
"An Appomattox teen still can't believe he's alive. Right in front of his eyes, Daniel Poole, 15, watched a tornado destroy his entire home.

Poole was sick Wednesday. He never imagined that staying home from school that afternoon would put him in the middle of chaos. The only reason he says he is alive, is because of Chris Wright."

Here is his little sister, after:

My twelve year old, sitting in what's left of a rocking chair her brother used as a baby, looking at what is left of her house. 😕😢 The community has been overwhelmingly supportive and loving. Wherever I live, I'll always be proud to call Appomattox my home. #tornado #appomattoxva photo creds to @leah.swan21
A photo posted by Bob Poole ⚓️ (@narwhal1999) on Feb 27, 2016 at 5:09pm PST


As many buildings and homes were flattened, it could have been worse, because there are SO many trailer parks, SO many rickety shacks that people call home here. It could have been even more devastating and horrible with so many weak structures in this area.

Appomattox is strong.
The next morning, they were telling people to stay OUT of the tornado impact areas where people were rushing to help because everywhere were downed power lines and sewage and it was totally unsafe.

So I headed to the animal shelter which was out of power, and helped walk dogs / unload cars pulling up with water and food. After years of volunteering long ago at the Richmond SPCA, it was like coming home. 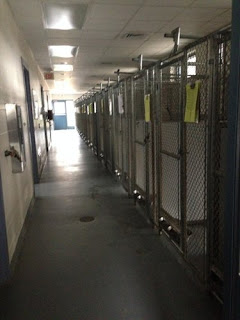 Here are some pictures I took as we were slowed to a crawl on 460 because of the downed trees and power lines: 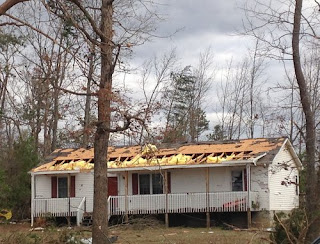 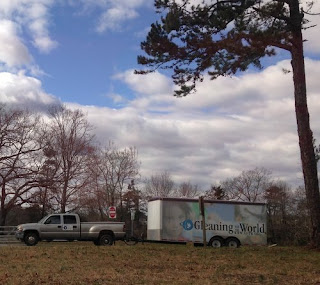 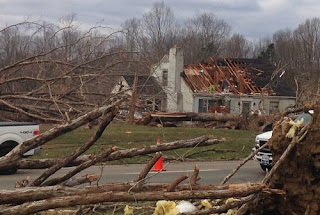 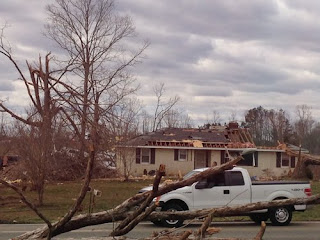 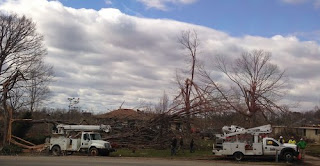 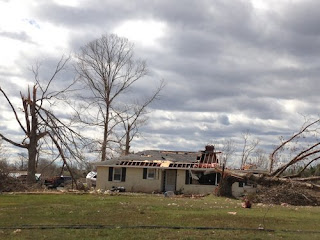 It is all terrible- lives lost, homes flattened, communities forever changed. But even in this devastation there is so much beauty
and love here...

Tales and tales of love and support and kindness and giving keep emerging, on... and on... and on. We are SO grateful to live here. 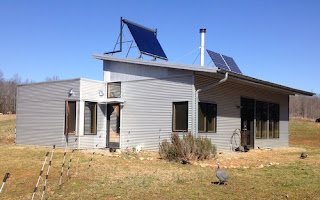 So. Yes. I will address the elephant in the room: I'm glad we live in a SIP house.
From the SIP manufacturer:

The skins are adhesively bonded to a solid foam core over the entire panel surface. The skins act like the flanges of an I-beam, and the rigid core provides the web of the I-beam configuration. This composite assembly results in increased stiffness, shear strength, and predictable performance. During site assembly, the panel edges are fastened to OSB or lumber splines, further strengthening the overall structure." 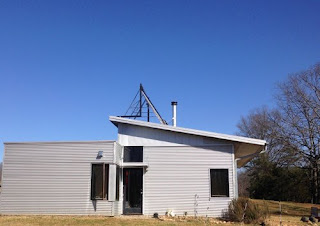 BUT. Structural insulated panels or other materials are not enough: the biggest leak in a home's security when tornadoes hit are the garage doors. And if not that, what about the windows and regular doors?

From the Washington Post: The tornado-proof home: is it possible?


"Retrofitting an existing home with a reinforced “safe room” is a relatively low cost option, says Ernst Kiesling, executive director for the National Storm Shelter Association. It would cost about $2,000, he says, to harden and stiffen an existing bathroom or closet. Alternatively, it would cost somewhat more to build either a remote underground or partially underground shelter.
... 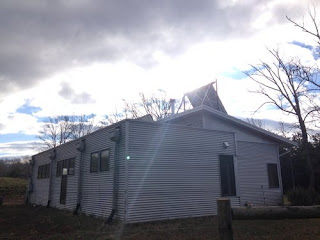 Structural insulating panels, or SIP’s (or foam core panels), are somewhat similar to and sometimes paired with ICF’s. Although around for some time, they are just now gaining more favor by builders and consumers due to their strength, “green” qualities, insect and mold resistance, and other attributes—much like the benefits of ICF’s. “The reason why it works better than two by fours or stick framing is because there are very few seams and gaps in the walls compared to stick framing,” says Michael Lamb, certified energy manager at the Energy Efficiency and Renewable Energy Clearinghouse, a division of the DOE. Lamb goes on to explain that with conventional construction, air blows into wall cavities, but with SIP’s, there are fewer seams and leaks and more uniform wall insulation." 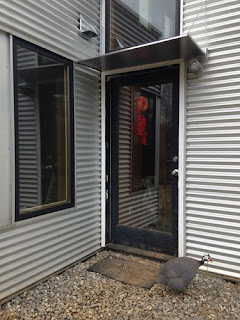 CAN YOU TORNADO-PROOF A HOME?
HOW TO PROTECT YOUR HOUSE FROM AN EF-5 TORNADO--AND WHY FEMA DOESN'T RECOMMEND YOU EVEN TRY.
Again, having a "safe room" makes more sense then tornado-proofing an entire house. But still I'm glad to have our "shell" made of SIP if we decide to tornado-protect one room (most likely that bathroom).

8 Ways to Protect Your Home Against Tornadoes and Hurricanes

Although we have a modern prefab house made of SIP, and have strong, efficient windows & doors, those windows are still made of glass, and we can engineer more directly for a tornado such as this. As this was the second big tornado to hit our area in less than three years, we will be taking some extra precautions. As we decide what they are, we will keep you posted. 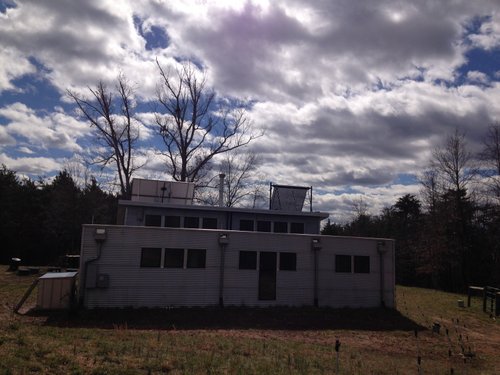