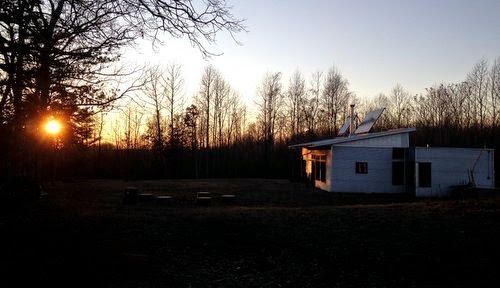 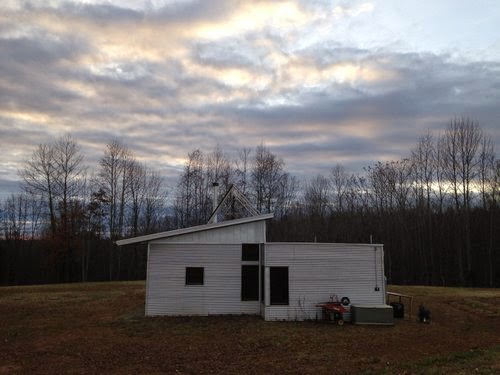 I want 2015 to be allllllllllllll about health at the off grid prefab house... Healthy kids, healthy better-exercising I, healthy off grid systems, healthy finances, healthy garden soil.
HEALTH, y'all. 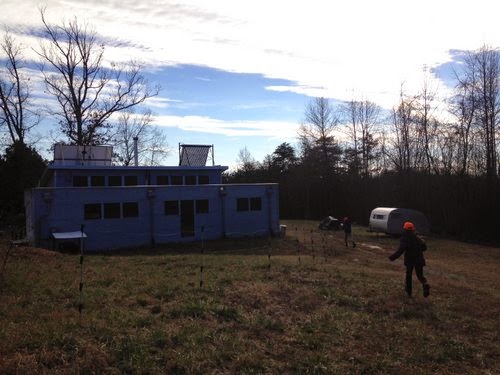 Here's a newsflash for you city folk: It is really hard to exercise in the country during rifle season. And when you lunge horses? The less you move the better you are with the horse.
I am lookin' to get HEALTHY, and I need to move more!

Everyone's gearing up for their extreme New Years exercise regime; I'm just waiting for rifle season to end so I can go for a frickin' walk! 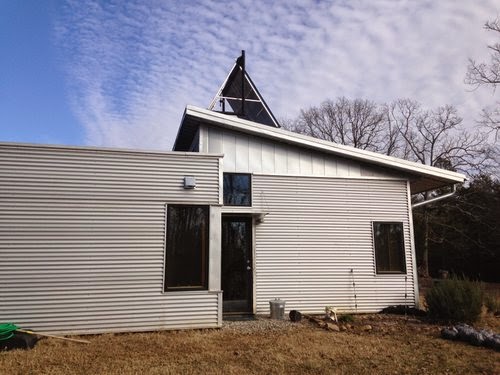 As you recall, we had real issues last week, but good news: the Sundanzer off grid freezer is NOT fried! Last week, I thought the ebbing of the battery bank had killed the freezer, and we scurried from farm to farm on Christmas Eve distributing our freezer contents into friends' freezers, before leaving to visit family.

When we returned from a few days of Christmas visits, I saw the freezer top was down. "UGH! Now it's going to be full of disgusting mold!"

I lifted the top... and saw the temperature read -10. It was nice and frosty. "Huh!" I looked outside- yes, it was sunny, so yes, the freezer now worked great as the sun was charging the battery bank.

Although our battery bank has lost its five day charge, now I know that as long as they hold a charge our freezer is still ok. So now we just need to address the battery bank issue!

Healthy Off Grid Solar Battery Bank:
A New Battery Has Been Ordered.
Handsome Husband recaps:
"Currently the leading technology for off-grid batteries remains conventional lead-acid. There is a lot of investment underway to breakthrough into new solutions with higher capacities and lower prices but those have yet to hit the market.

Within lead-acid batteries the lowest cost option are golf cart batteries. Battery size is measured in amp hours and golf cart batteries typically don't exceed 225 AH. The next step up are T-105 or L-16-type batteries which can reach 400 AH and are slightly more durable. Every battery has the capability to perform a certain number of discharge/charge cycles that is mainly affected by the thickness of the plates inside of the batteries.

We opted for the next step up which are industrial batteries, the types of batteries you find in fork lifts etc.. These batteries have even thicker plates and provide the longest life expectancy amongst the types discussed here."

Healthy Money
Let's talk about healthy finances, because believe it or not, that IS something over which we can have control, vs. a cold.

Handsome Husband: (who, by the way, has an M.B.A.)
"I feel like people are intentionally kept ignorant regarding financial matters with the intent on continuing to fuel the consumer-driven economy."

On NPR a national economist states now it would be a great time for consumers to pick up more debt again. This week a friend congratulated their child for getting their first car loan. (Congrats! Yer all grown up now! You have debt! I'm so proud of you! Now you can have a credit card and get even more debt! Lucky you!) Children we know are making college decisions yet with no talk from their parents on student loan debts and how it will affect the rest of their lives. (Congrats! Do what you want, but don't look at the price tag! Because that would be too practical and you're supposed to have FUN in art school! Handsome Husband: "Seriously? They'd be better to not go to college at all, and take some art classes! They'd still come out ahead!")

Looking Back On The Economic Collapse
"... to remind everyone, this damage is not the result of a hurricane or earthquake or some other natural disaster. It was the result of failed economic policies that could have easily been altered. "
We alter our own personal financial behavior to not rob our future selves, to not put ourselves in debt, to not live beyond our means.
Handsome Husband: "I prefer not to use the term 'frugal,' for one because I don't believe we are living a frugal life, and because when you choose to spend your money on your future self you are still spending - just in a different way."

Healthy Minds
I appreciate that I can work as well as homeschool. I saw this commercial, and yes it's a commercial, but I think it also nicely addresses what children really want...

I am pouring Amish immune booster + pickled garlic down our throats until spring.

I am also trying to figure out ways to better incorporate exercise in the country- ironically, it's hard- there's rifle season, overloaded logging trucks going 70 on too-narrow country roads, and even though I see our horse every day, when you lunge you actually don't move- the less you move, the more in tune to the horse,  and I ride pretty much at a walk/trot so... I need some exercise.
Healthy Soil
The seed catalogues are arriving, and with them, anticipation for next year's garden.
Here are some soil items I have been contemplating:
I have been thinking about Biochar, Carbon's Champion
I am done with looking at the hideous two brush piles created by Handsome Husband and a friend. It has been the bane of my view for over two years now.

When yer suckin' on lemons, add a twist and you've got lemonade, or in this case, BIOCHAR to finally improve our garden soil and fields!
"Biochar is the bridge back to organic farming that reverses the destruction brought about on the earth by conventional farming. We have to recarbonize our soil; biochar can help us speed up this process. If we don’t do it, the vital layer of fertility that supports life on earth will be irretrievably lost."

But beware the biochar initiative, says the Permaculture Research Institute, and I get this:

"Biofuels: Biodevastation, Hunger & False Carbon Credits, SiS33). Calls for moratorium on biofuels came from Africa, the US, and the United Nations [16] (UN ‘Right to Food’ Rapporteur Urges 5 Year Moratorium on Biofuels, SiS 36).
The biofuels ‘boom’ has already exacerbated climate change by speeding up deforestation and peatland destruction, loss of habitats and biodiversity, depletion of water and soil, and increased the use of agro-chemicals. Above all, it has generated poverty, land grab, land conflicts, human rights abuses, labour abuses, starvation and food insecurity as documented by BiofuelsWatch and 10 other groups [13, 14] (see also [15] (

Biofuel production – mainly bioethanol and biodiesel – more than doubled between 2003 and 2008, driven by rising oil prices; while food prices rose 70 percent between 2005 and 2008 [17], according to data compiled by the international Monetary Fund. The UN declared 2008 the year of the Global Food Crisis (see [18] Food Without Fossil Fuels Now, SiS 39); food riots and fuel protests were rife. UK’s Environment Audit Committee joined the call for moratorium in January 2008 [19], and reiterated it in May 2008 [20].

Biochar is widely seen as the successor to biofuels on grounds that it will sequester carbon and improve soil fertility while also producing energy. Biochar is not just carbon neutral; it is “carbon negative”, according to its proponents, because buried biochar is stable for thousands, if not hundreds of thousands of years."

I am not endorsing mass corporate burning of wood then transporting it away; I am trying to 1. improve our field's poor soil with 2. an existing brush pile problem that is on site, thus 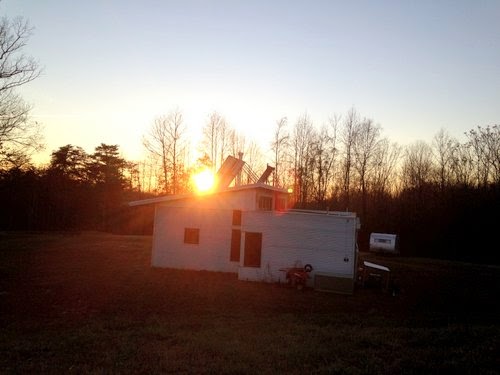 improving the site's soil, with the expectation it will help improve our soil.
In the end, compost remains yer garden gold.

In the end, I would have definitely preferred to have brush pushed along to the field edges to create wildlife habitat. That did not happen. Hence, my lemonade out of lemons mentality leans towards biochar.

Here, my favorite seed company, Southern Exposure Seed Exchange, goes over one of their grower's no till methods:
"...In fall, around the time of his first frost, he broadcasts Crimson Clover over his main garden area. In spring, as he is getting ready to set out seedlings, he has 500 square bales of hay delivered, and spends one day covering the entire area with an 8-inch-thick layer of loose hay mulch. He transplants most of his crops, including beans, melons, squash, and others that most gardeners and farmers would direct-sow. However, he does direct sow some crops, including carrots, turnips, parsnips, and some greens, by raking back the hay to make a 6-inch-wide row, sprinkling compost, then sowing the seed and lightly raking over it. When the seed is up he pulls mulch up around the plants to limit weed growth.
...
For the Winns, going no-till is a great way to save time in the garden, as they don’t have to hoe or thin most of their crops, or ever bring a tractor into the garden. They also don’t have to remove trellising and drip irrigation as often as farmers who till. The method also builds great soil. In 1998, the farm had hard red clay soil. Now, while the subsoil is still hard red clay, the topsoil is a rich, dark loam created by sixteen years of nitrogen-fixing clover cover crops, ten years of thick, carbon-rich hay mulch, and three years holding nutrients in the soil by not tilling." 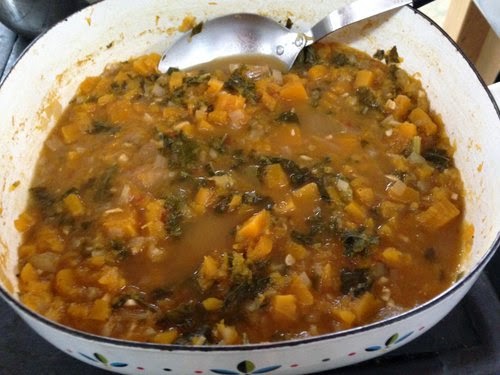 This probably sounds disgusting to you. FINE, it's not a great name so call it what you want. It is an AMAZING winter soup I make with the winter squash we always grow- called by many names (Tahitian melon / tromboncino / neck pumpkin), if you don't have it on hand you can substitute butternut squash as it tastes exactly the same. I love to have neck pumpkins on hand because they keep so well! 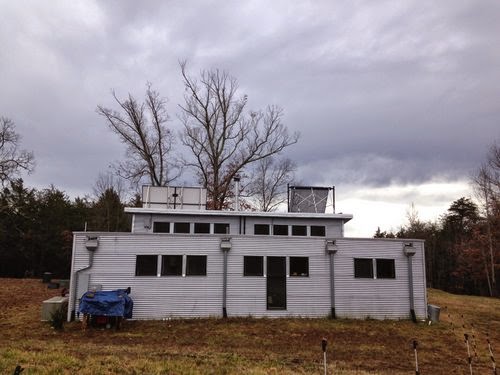 At The Off Grid Prefab House, The Week Ended With Rain.
I listened to the cistern fill, and the time was spent in pajamas or the barn, a quiet end to the holiday season.

On one rainy day, we lopped off Pip 2's hair to donate.

AFTER the fact, we learned there were more options. My advice is research all, follow the directions to a "t" so that your donation is not wasted, and donated to those you want most to serve.  In our case, she is donating due to quite a few people she has known whom have been affected by cancer, several of them children. 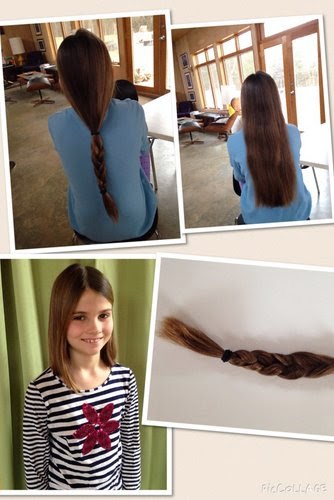 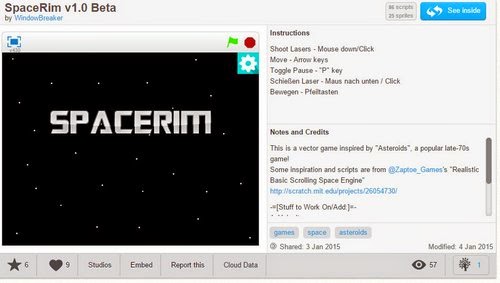 While we were lopping off Pip 2's hair, Pip 1 was programming another game.
I played it Friday and got the top score!
The comment section was hilarious: "Your MOM has the top score?!?"
I, to commenters: "Honeychiles, I'm country. OF COURSE I have the top score!"

And with that, rifle season ends, riding and hiking season begins anew, and we start a new year at our off grid modern prefab house. 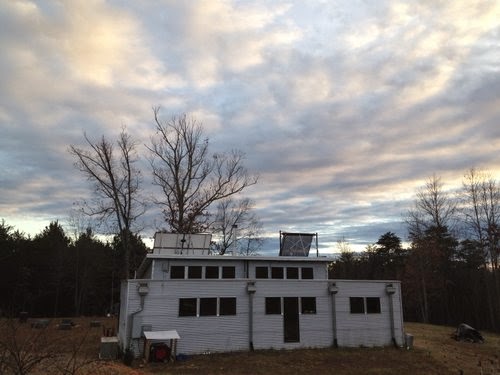