At The Off Grid Modern Prefab We Sit With Friends, Put Away A Bad Guy, And Gain A Citizen. *Phew!* 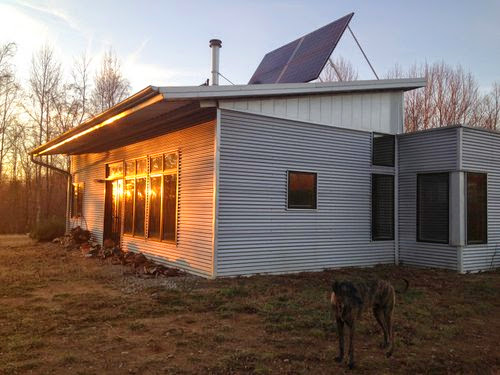 It was an overwhelming week at the off grid modern prefab house. 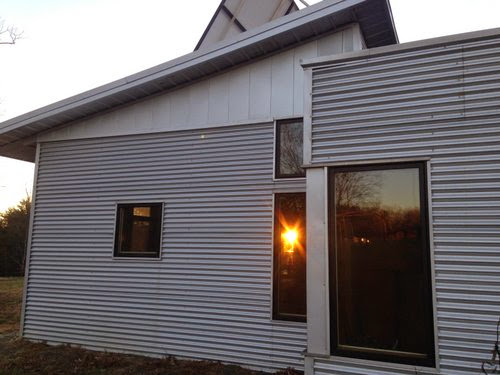 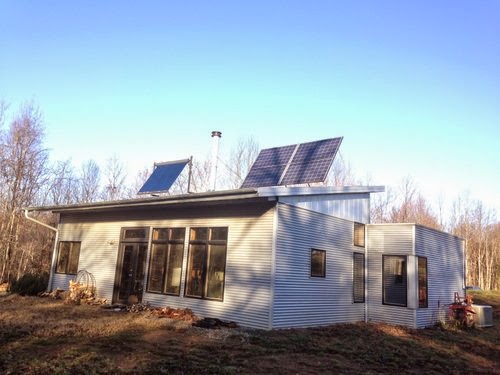 Let's start with work. Thanks to the person who was inquiring about our passive solar prefab green homes and asked, "What is the life expectancy and maintenance of a SIP home vs. a conventional build?" 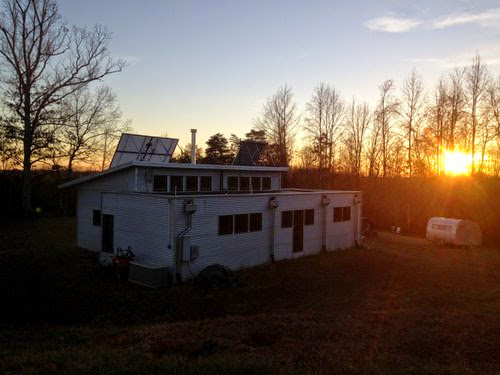 Here are some quick links: 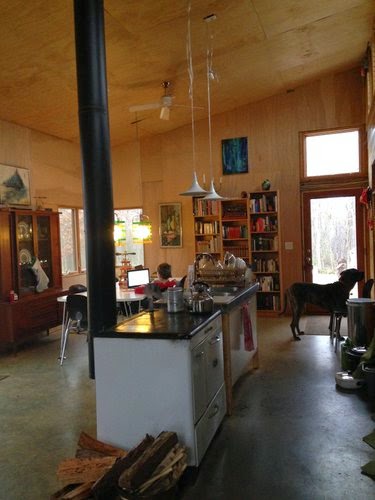 People ask us a lot of questions about living off grid, with solar power.
Here's some food for thought if you have solar panels or are considering installing them:
Are your solar panels facing the wrong way?
"...Pull out your compass, and you’ll observe that most of these solar installations point southward. There’s a good reason why: south-facing panels capture the most sunlight and produce the most energy over the course of a year.

But as of late, many energy thinkers are pivoting toward the western sky. They’ve pointed out that west-facing solar panels are better at generating power in the late afternoon – when the grid can benefit the most from the extra juice. A field study last year of 50 solar homes in Texas verified this west-facing advantage, and some sunny states are already betting on it. In September, the California Energy Commission lit the way when it announced a $500 incentive for the installation of west-facing panels on new homes."

To make the decision which is best for your own off grid / solar home, you need to consider that south facing *does* capture the most sunlight; west facing solar panels might be attractive if you are working outside the home, with net metering.
***Note: the key issue here is: are you tied to the grid, net metering?*** 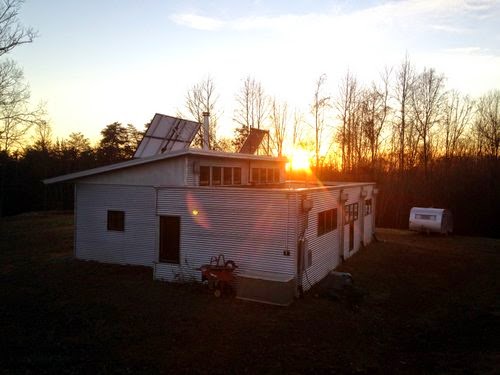 Renewable Energy World explains why, in much better detail.
"...Because they help more to reduce peak load, and put less strain on electricity distribution systems, west-facing PV systems may have more value to the grid than do south-facing systems, despite producing less total energy over the course of a year."


At the off grid modern prefab house, it has been a long week, full of highs...
and terrible lows. 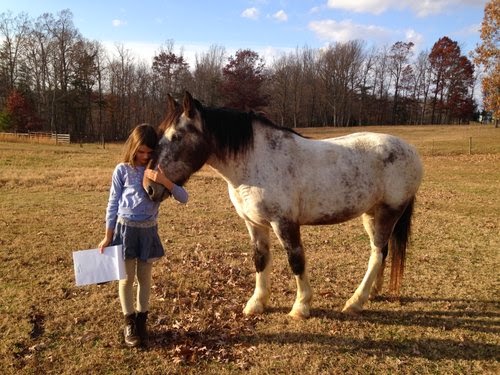 Tuesday I went to sit with an Amish friend who is enduring unspeakable sadness.
I brought dinner, and we sat, the clock ticking, her fingers crocheting, making slow conversation... There is just nothing you can ever say, in tragedy... except to be there, as awkward as it is.

Even in sadness is love. They know how loved they are.

Grief is universal, but so too is humor.
She asked if I crocheted, and I started telling Punk Rocker stories (as in why I don't have any idea about sewing- "Punk Rockers don't sew- I use a stapler!") and I think I saw a smile...  In fact I think I almost got a giggle as I described how I dressed as a teen... and described what Punk Rockers look like...

As much as a deflector and goofball one can try to be during hard times... really grief is SHOULDERED. We all pick up a pole of the burden. Every day pain is felt by those who love you. There really is something in deep grief that, you know you can't make it better, you just have to sit... and be there. And listen to your obnoxious friend tell really weird stories about black lipstick, ripped stockings, and Aqua Netted dyed black hair.
I will sit afternoons, eternal, for this friend.
She can roll eyes at me.

On Wednesday we were in circuit court to put away a Bad Guy (seriously, who steals money from little kid's PIGGY BANKS?!?). 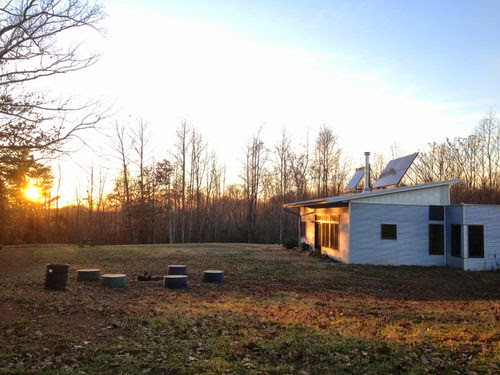 On Thursday, we were in federal court to welcome our nation's newest citizen! Many friends know Handsome Husband has been in the process of becoming a citizen and was  approved. We always dreamed of having the ceremony at Patrick Henry's Red Hill, then a party to follow after at the prefab, on a pretty May day... 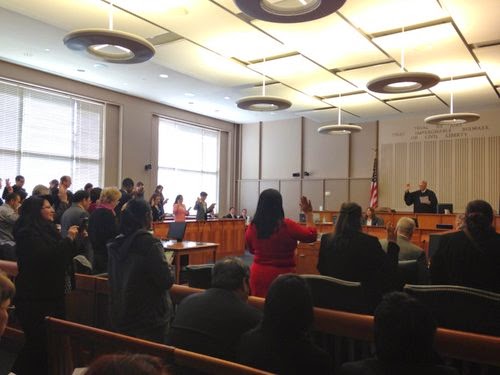 Well, what we learned is that citizenship is like pregnancy: You find out and go,
"Oh. My. Ok, here we go!"

We had been waiting for weeks to hear the swearing in date, then, when it was in Lynchburg, asked for it to be transferred to Richmond so we could also include our RVA friends and family.
Well, nope, no letter arrived about Richmond; Handsome Husband just called from the train from DC:
"Well they never got the letter so I am on my way home tonight in case it's still in Lynchburg!"

We hurried to Lynchburg. From one moment to the next we didn't know. Until: yes, he would be sworn in, today.

The ceremony was touching, joyous, as magical as a wedding day, or birth.
The judge gave a wonderful speech but the best moment was when he invited the new citizens to give their own remarks- and everyone started sharing stories and tears and then the Assistant United States Attorney told stories of his own family's journey to be citizens, two generations back - "He arrived with $14!" It was a beautiful mash of humanity- ages, countries, gender, circumstances.

And yet, by lunch they were drawn into one nation, fellow citizens.

As we stood around Judge Moon snapping pictures, everyone congratulating each other, a point I made to the INS agent and a fellow new citizen was, "You know, all these years he had his green card, heck he was married to a citizen... he didn't have to do this. But it was his heart. When we moved to the land, that's when he really started feeling, 'THESE are my people, THIS is my community, THIS is my land...' and thus the journey to be a citizen began." 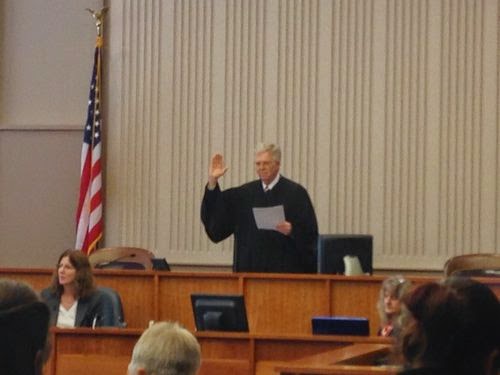 Uh... OK! So... party to follow soon. As soon as I can recover from the day, and uh, make something happen. 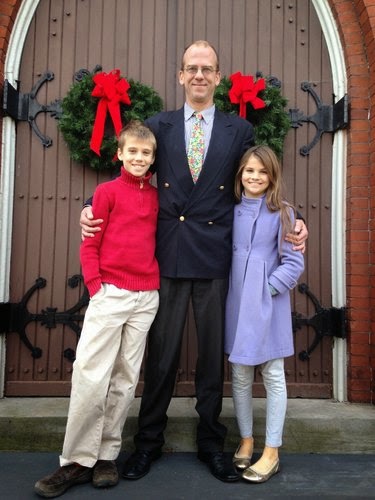 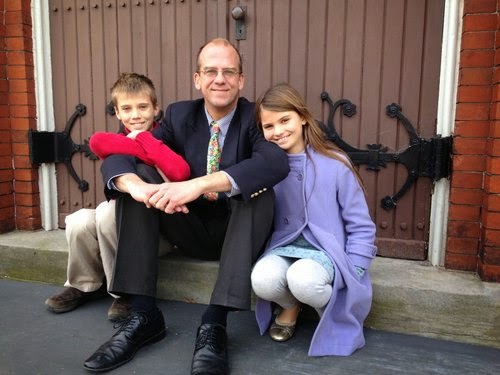 I am signing off, putting on my PJs, and CALLING IT A DAY! 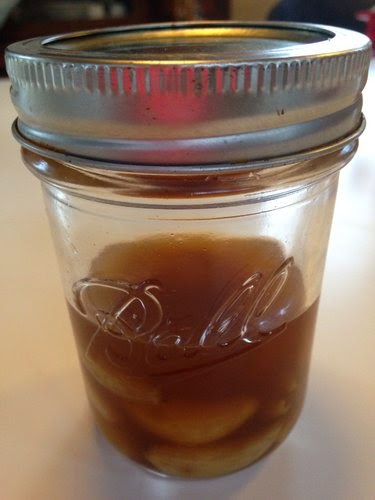 Oh. Wait. We're not yet done with this week yet?!? Noooooooo... Ohhhhhh noooooooooo we are not.
The kids got sick!

Fortunately, there was our friend Rachel's Pickled Garlic to the rescue:
Fill a large jar with peeled garlic cloves, one of nature's strongest antibiotics. Pour in raw apple cider vinegar until covered, let sit 3 weeks. Then drain the vinegar into a bowl, set aside, and divide up the cloves into smaller jars. Add back in enough vinegar to fill half each jar, in in the remaining space add raw local honey. Let sit three weeks.
The result is a powerful medicinal concoction to ward off the ick!
And you get delicious leftover garlicky vinegar to use in cooking! 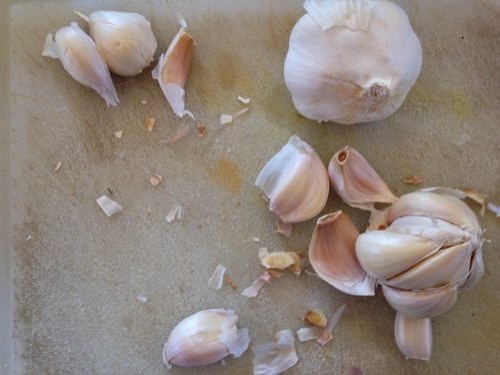 With illness, I made lots of soups and stews full of garlic, hearty vegetables... Chili with loads of garlic and kale, stews, and:
Copeland's Cauliflower Soup 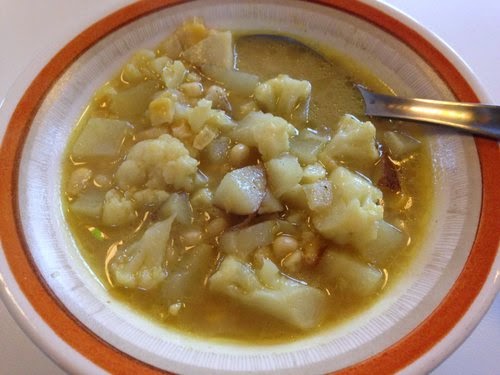 Dice small potatoes, cauliflower, mince garlic, ginger and saute in coconut oil. Add a can of coconut milk and broth until covered. Stir in curry, plenty of it, and if you have it on hand coriander / cumin  / allspice / tumeric and salt. Simmer until tender. In the last minutes add in a generous amount of fresh corn kernels.  Ladle into bowls, serve, sprinkled with fresh pepper.
If you like I'd also add onions / sriracha, but the kids' stomachs needed it more mild today.
(And do you know what tasted great? I spooned in a little of that honey/vinegar sauce from the pickled garlic into my bowl!) 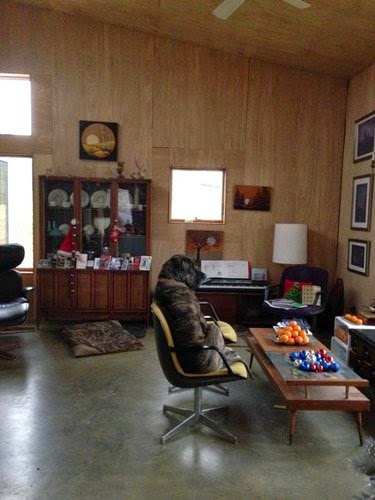 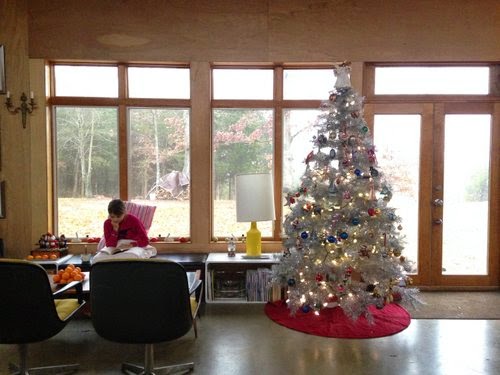 Homeschool:
The weekend finished with the better-recovered part of the family heading to Patrick Henry's Red Hill for its Christmas Open House. 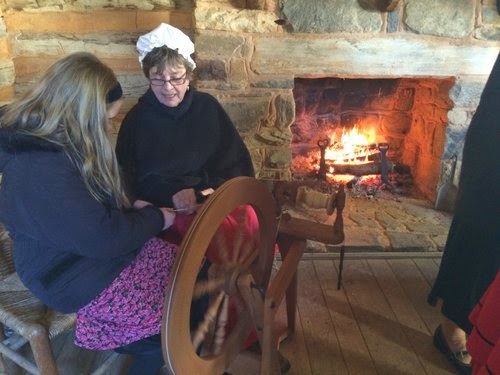 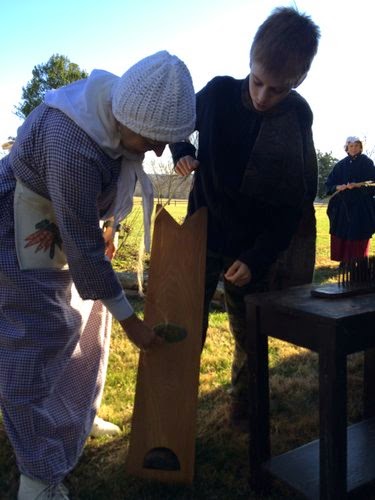 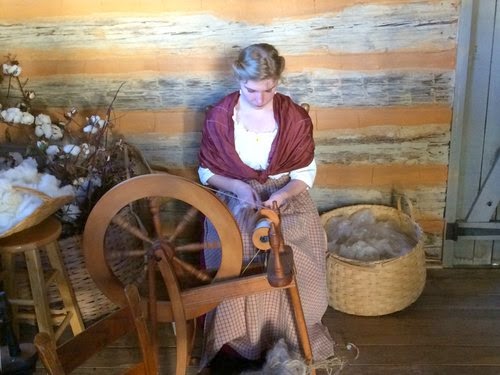 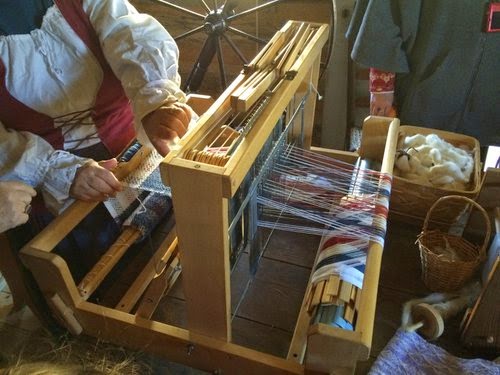 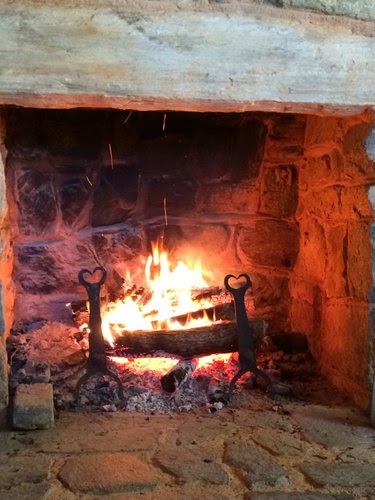 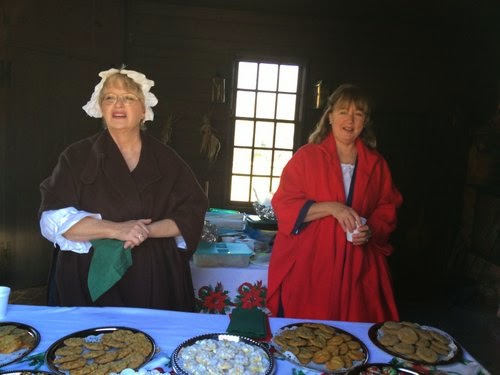 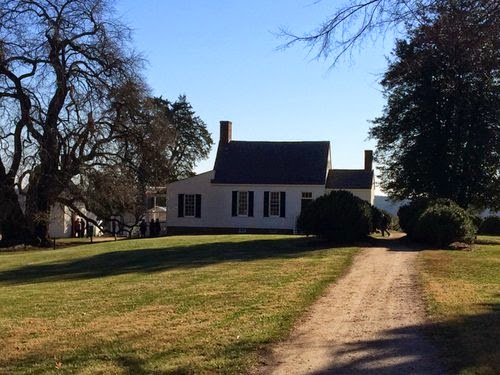 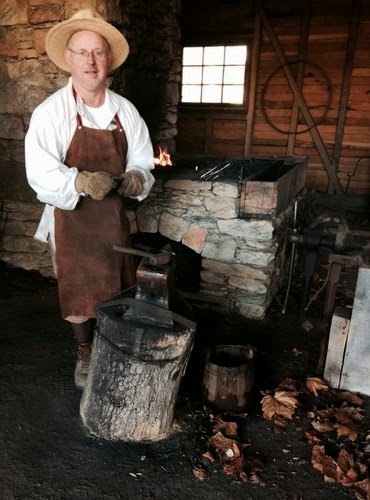 The Not Quite Recovered Half of our family didn't do too poorly, we got to hang out with Zena, outdoors, where we wouldn't give anybody cooties.
Hope y'all all have a healthy week. 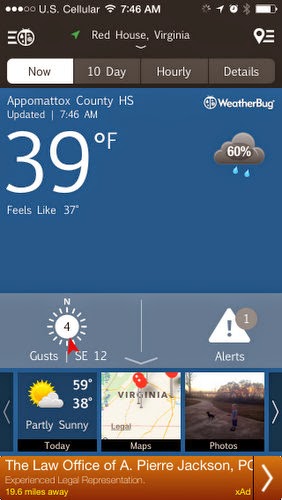 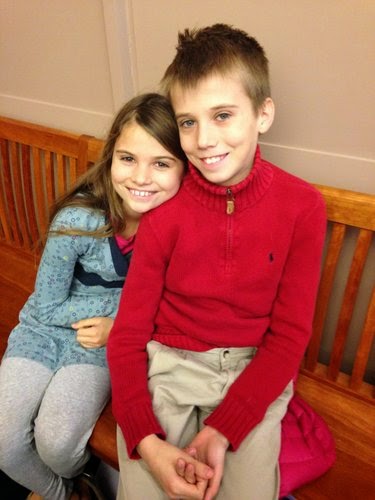 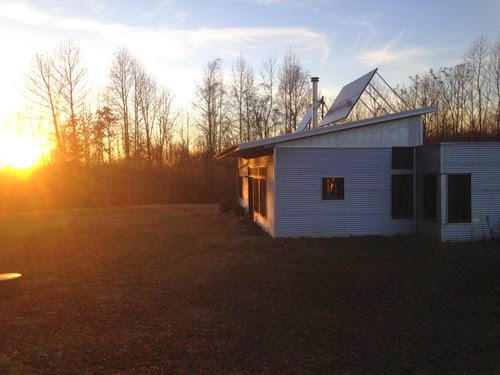 Ps. I also found this on Handsome Husband's phone which I loved from last week: Never be above the muck bucket, y'all. Love every second. Love my friends.
Come visit Appomattox!