With Halloween over, suddenly autumn became real- in the 20s at night, 60s during the day... yet still so mild that we fired up the cookstove to just "boost" the evening, knowing it would fall into the 20s, but certainly didn't feel we "needed" it.

There were high winds- power was even knocked out at a friend's house in a nearby city. 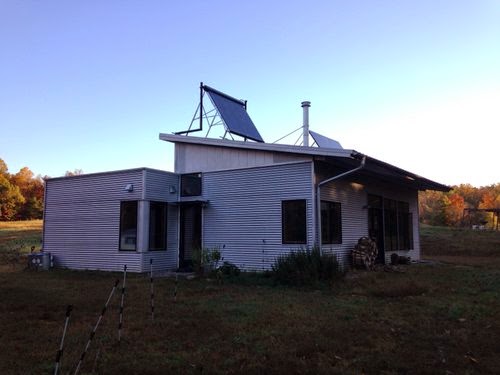 In turbulent weather I am always grateful for a SIP house... No drafts come through those structural insulated panels, that's for sure! It was calm, cozy, I enjoyed watching the wind... then slept soundly. 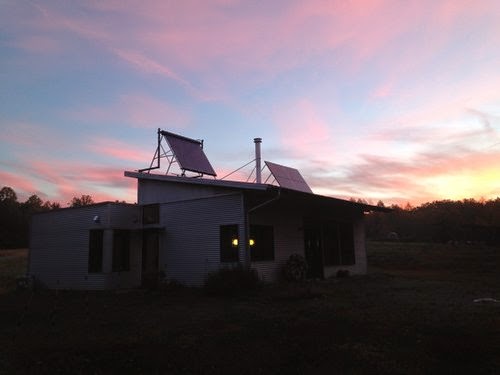 Thanks this week to Mister B, who bequeathed all his last green tomatoes to me, I have joyously strewn them about the house on platters- decorative yet used every day in cooking. (Thanks, Mister B!) 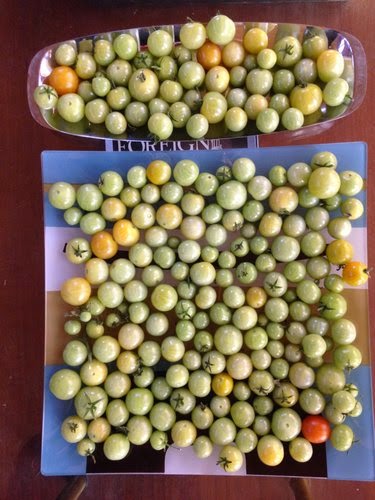 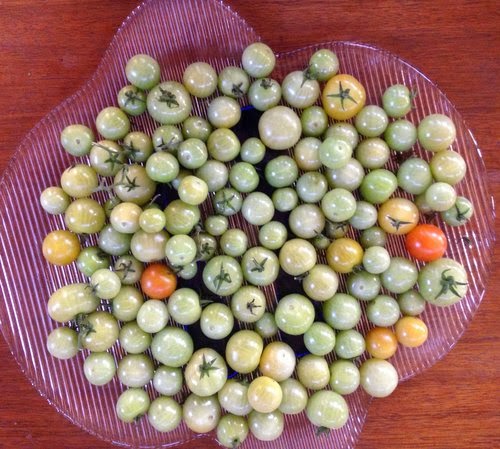 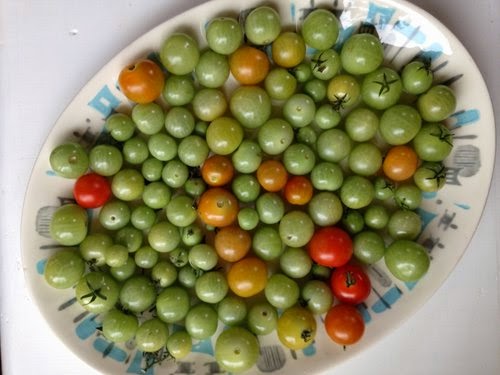 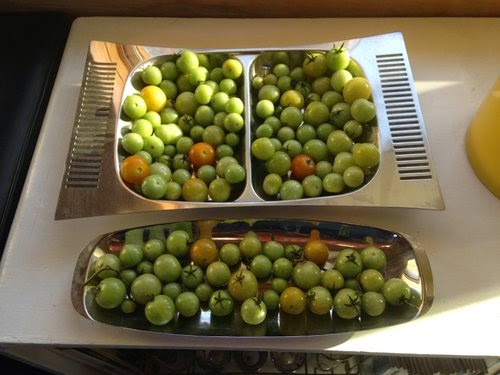 I also read an interesting article on Tiny Houses this week...
If you read this blog, most likely you are interested in architecture, off grid prefab houses, and have read about the Tiny House
movement.

To be fair: Tiny Houses claim to appeal to people who seem to not qualify for a mortgage. But... this is all going to sound so harsh!  I didn't mean to start out to ever even talk about Tiny Houses, they've been around quite awhile! It's just that the article caught my eye and I thought I'd put to paper, er, the internet, what had been rattling around in my small brain awhile.


I always think about how, even with good solutions responsible Tiny House enthusiasts have found for HVAC / plumbing (toilet) solutions, it seems that to do Tiny House (or any living) well (up to code, fresh air exchange, sanitary) you are really spending serious money in such reduced square footage that it quickly turns into *real money* - a real investment!- that is hard to recoup that if considering resale value. I always consider resale value... which is why I err on the frugal side... Even the wealthiest I-Can-Afford-Any-Price-Point-For-A-Tiny-Home don't enjoy throwing away money, knowing they'd never resell it for that... don't they?

I do love campers, and envy a good Gypsy Caravan.
But Gypsy Caravans travel, following temperate seasons... Most people these days are still tied to jobs, and places. So if you are going to do a Tiny Home, make sure to have hvac / plumbing... because otherwise you are reverting down, instead of up in modern / sanitation.

Then there are the people who seem to park them in friend's back yards and talk endlessly about their Tiny House lifestyle...  that's great for awhile, but don't proclaim how free you are- you're dependant on someone else's kitchen, toilet, shower... you might be happy with all the amenities, but maybe reflect whether you might, on the flip side, be the neverending guest? And if a "roommate," splitting rent and utilities, do you wish you were inside come February? To each, their own. I just think seasonal solutions like my beloved camper can't quite be counted on as through-the-seasons housing.

If you're already spending $80,000+ for a Tiny House maybe you could get a mobile home with a little more space?
"But everyone knows most mobile homes have no resale value! Or insulation! Or..."
Neither do (most) Tiny Homes... at least you'd be getting a little space? If you're not going to get a return on investment on a mobile home, or a Tiny Home, then maybe just rent an apartment somewhere cool and different every year?
I don't know.
What do you think?

Here's a great article that not just critiques the Tiny House itself but delves more into the lifestyle and why or why not it is working. Again, resale comes up in my mind when they talk about the intentional communities- if they pattern themselves after the traditional trailer park, the good news is you'd have more "community" but that also means you would be "throwing away" money on renting the lot indefinitely. I like to see owned lots.

By the way, the comments (from all viewpoints) on that first article are worth reading...
Here, David Karner's:


"I think you're STILL missing the point. The main reason for going small is ECONOMY. It's infuriating to see all these articles on tiny housing where the houses are just as - or even more - expensive than the giant houses they are replacing. If you want to see why your idea doesn't work, look at San Francisco. All of the available lots in San Francisco have smaller single family dwellings, and there is still a huge shortage. The only way to build out of this is high density large buildings. In the America of the future - an America that, through massive immigration, is going to be very overpopulated - there has to be some way that a family that are not millionaires can buy or own a home."


"But... we already have a response to the need of small living quarters in high-density areas. They're call(ed) apartment buildings." 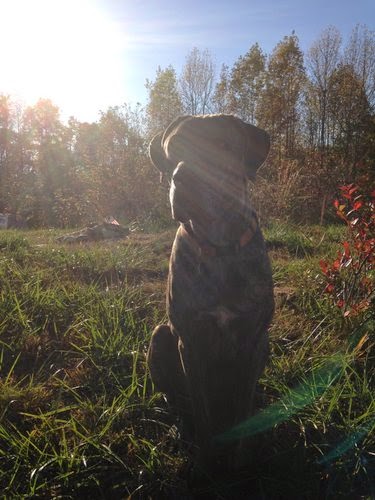 A quick internet search brings some food for thought:
These are all great articles:
I'm not totally pooh-pooing the idea of living so minimally; I like it in theory; but I am a firm believer in investment dollars and how to best get a return on my investment for resale value down the road.
I believe that if you truly are going to be living full on in that lifestyle you should expect to have energy efficiency / insulation / fresh air exchange / plumbing solutions...
In other words: SYSTEMS, PEOPLE, SYSTEMS. Otherwise you have a shell and not a house that "works," much less maintains investment value. 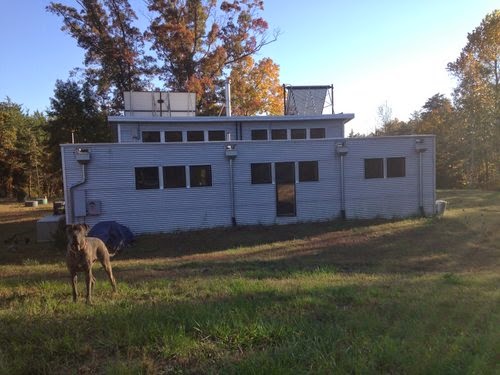 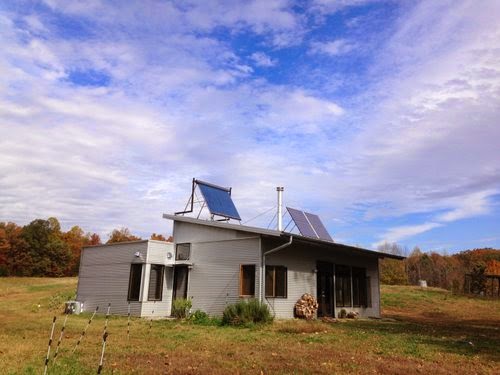 I believe in small footprint homes, it's what I passionately do.  But I also want to make sure they last, work well, and are able to provide solid shelter on my (and anyone's) investment for generations.

Handsome Husband chimes in:
"In Germany tiny houses have been around since the late 1800s: As industrialization created more and more factory jobs, workers would lease a tiny plot of land (I am talking 500 square feet) in a garden colony (in german: Schrebergarten) and would build very very small (well, tiny) houses on them to accommodate the owners for a very brief stay as they escape the city on their day off during
the week.

Instead of being a free place, this is the evil ancestor of your U.S.A. homeowner's association- they literally walk around and measure the grass."

[Oh. Myyyyyyy. And I was just going to say what a lovely garden / community they created and that this might be the great translation of tiny homes to garden communities, but only if they sold the lots vs. lease!]

Speaking of workers, the Pips were kindly asked by an artist friend who exhibits in galleries all over the world to step into his studio. We were excited to be a part of art!

My green building self was pleased when, entering their renovated home and studio, I spied Mitsubishi mini-split ductless hvacs installed!

I had mentioned ductless mini-splits (ac & heat) earlier this summer so it was neat to see it in action in their 1920s home.

The Pipsqueaks have been busy studying Tom Chambers's art...
Have a look, yerself:
"Tom Chambers was born and raised on a farm in the Amish country of Lancaster, Pennsylvania.
...
Currently, Tom is represented by a number of galleries in the United States and Europe. His work has been shown nationally and internationally through solo and group exhibitions, as well as in a wide range of print and online publications. Recently, NPR's (National Public Radio) "All Things Considered" and "All Songs Considered" presented a collaborative Project Song based on the photograph "Black Dog's Retreat" (October 12, 2009). Tom has received recognition for his photography through a variety of awards, such as Worldwide Photography Gala Awards, First Place Digital Enhanced; Fotoweek DC, First Place Fine Arts (2009) and Second Place Fine Arts (2008); Critical Mass Top 50 (2008 and 2006); and Texas Photographic Society National Competition Third Place (TPS #18, 2009) and First Place (TPS #15, 2006). Tom has received fellowships from the Virginia Museum of Fine Arts and the Virginia Commission for the Arts."

Oh-
Remember how we lived with a composting toilet for years and then got a regular toilet this spring? We were so excited we even named it Flushy!

To our chagrin, Flushy got stopped!
Thanks to a good neighbor who is a plumber, Flushy sings again. The kids were so excited they even wrote thank you notes. 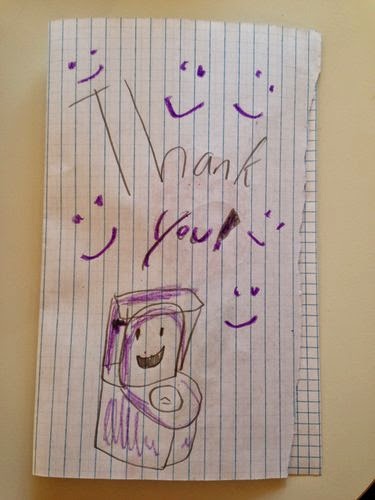 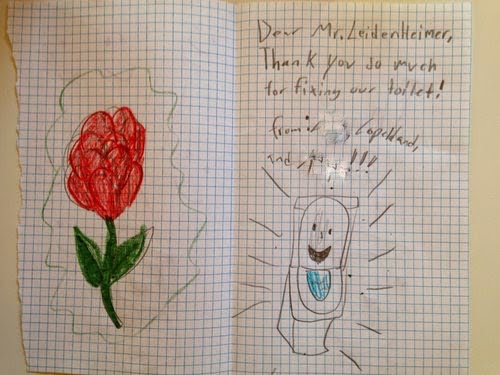 So, after living years with a top-of-the-line waterless composting toilet in a tight envelope, energy efficient house, the children's sentiments are clear.

Have a great week. 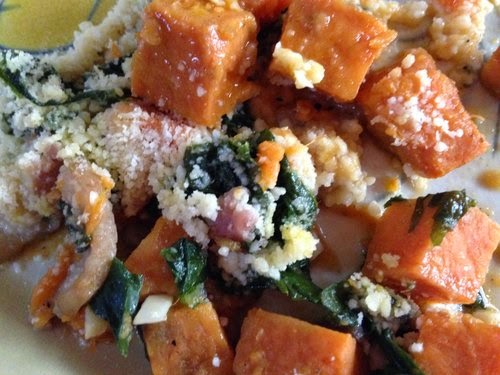 (with a hat tip to Lynn Novak who put sweet potatoes with kale!)
Mince lots of garlic, cube sweet potatoes (small not large cubes), shred kale into bite sized pieces, slice bacon width-wise into thin strips. Sautee the garlic in oil until brown, add sweet potatoes, bacon and kale, then, once sizzling, enough water to give the mix a good "broth" amount. As it all cooks that water will turn *flavorful.* Add plenty of salt and pepper, cooking until the sweet potatoes are soft. You can either spoon out (draining the liquid) onto a plate as a side, or ladle into a bowl for a delectable soup. Sprinkle liberally with parmesean. DELICIOUS and everyone could choose how they wanted it- as a side, or soup! It was so good, in fact, I didn't get any "nice" pictures even though I made it two days in a row! The above shot was the last few bites from Pip 2's plate, after she was overly generous with the parmesan. DEEEEEEEEEEEEEEEEEE LISH, honeychiles.