Snug As A Bug In An Off Grid Rug, Re-Affirmed. 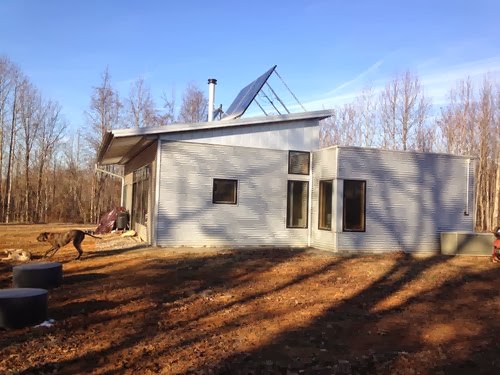 I wasn't the only one who was professing their comfort of their passive solar SIP homes through these polar vortexes...

On TreeHugger:
"Super-insulated and Passive Homes laugh at the polar vortex"

In it, you will recognize similar accounts to how our own passive solar SIP prefab house performed through the extreme Arctic temperatures.  Imagine if I had built the prefab with the thicker SIP panels (which you can)!

In it, Lloyd Alter quotes Alex Wilson of BuildingGreen:

Now last week we had a strange solar battery quirk that we wanted to resolve with the distributor while calibrating the batteries, which you can only do on a sunny day with the battery bank at 100%.

On Saturday, it would have been the perfect day (solar charged to 100%, bright sunshine) to calibrate the solar batteries, to hold numerous phone calls with the solar distributor going over every single little thing until we were confident with our findings that the issue was identified and resolved.

Except that on Saturday Handsome Husband was called into work in DC.
Well there went that.

I looked at the upcoming weather. It was to be cloudy, with rain, possible snow, all week. Cloudy would mean energy conservation when we are trying to finish 4th and 5th grade by the end of February... We are so close to finishing!

I thought about the uncertainty of the solar until we can resolve our concerns. Although the temperatures had risen to "normal Virginia winter weather," the issues had still not been confidently resolved with the distributor, even though I do think I know the cause (batteries stored outside beginning to freeze- the polar vortex's unusual icy conditions affecting an uninsulated battery bank storage box)...


My decision was made.
Into one car, I packed in two children,
two mastiff-mixes,
an extremely angry feral cat in a cat carrier,
a week of laundry,
luggage,
four hens
and hightailed it to Richmond.

We used the time to school intensively, and field trip.

Which meant discussing how Jefferson tried to rally Richmond (yet only 200 militiamen showed up), to defend itself from Benedict Arnold. I thought that is so interesting, because everyone is always talking about the burning of Richmond in the Civil War, but I never hear tourism nor local people discuss the burning by Benedict Arnold!  When I asked fellow natives if they were familiar with this, they were not.

IT'S THOMAS JEFFERSON VS. BENJAMIN ARNOLD, PEOPLE. RIGHT HERE!
AREN'T YOU FASCINATED?  I would *think* there'd be mentions all ovah the place! 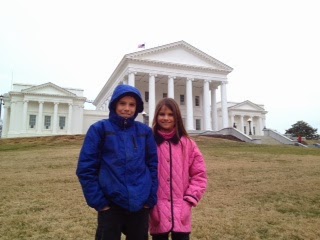 The Pipsqueaks visited the state capitol, and had a grand time with their tour guide.

I admit an advantage of homeschool are the field trips. Instead of herding 80 kids through fragile passages, this tour guide, even though it was a "group tour," only had the three of them. So they wandered all around talking and learning and having a blast. 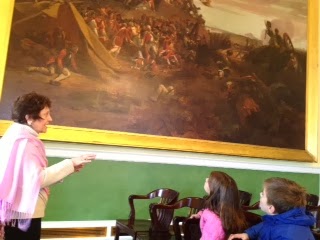 They studied Edgar Allen Poe, then visited the Poe House. 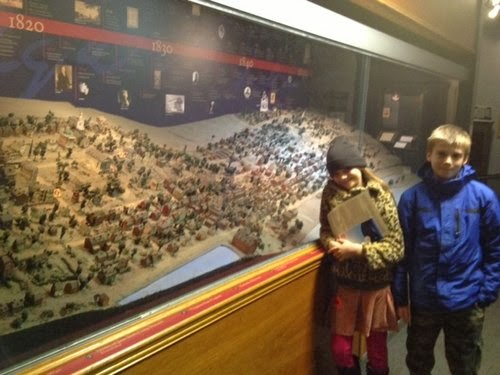 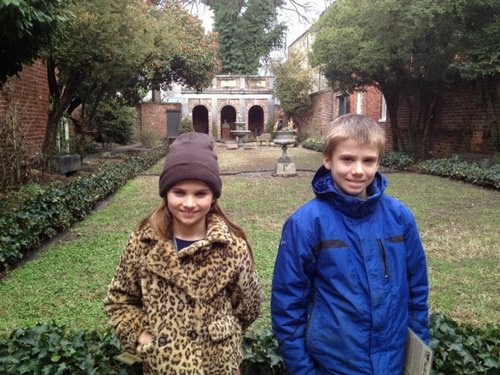 They walked the canal built by George Washington along the James. 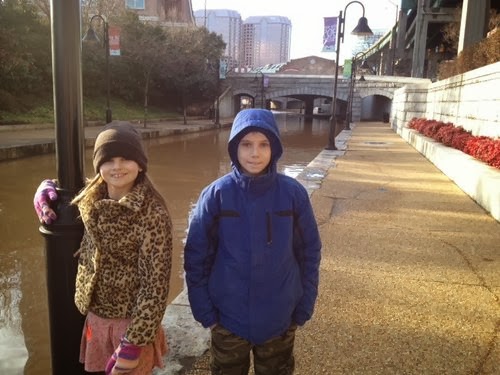 They saw the Lora Robins Gallery of Design from Nature.

They visited St. John's, where Patrick Henry gave his passionate "Give Me Liberty Or Give Me DEATH" speech. 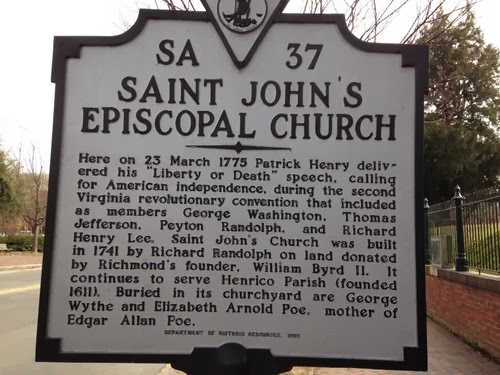 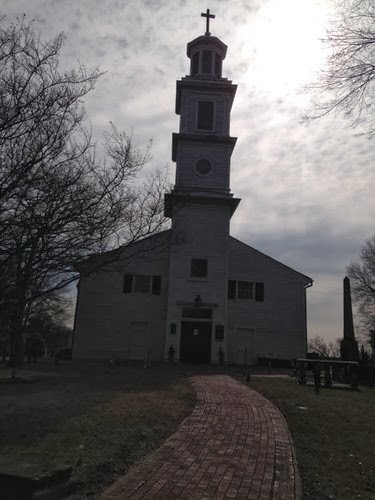 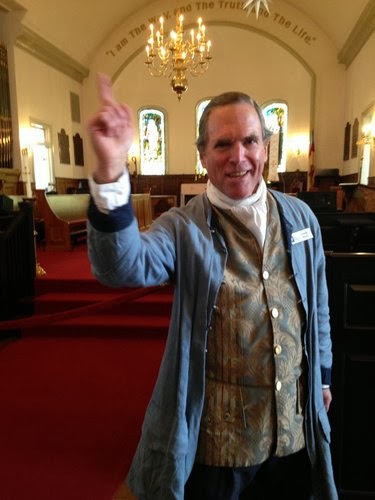 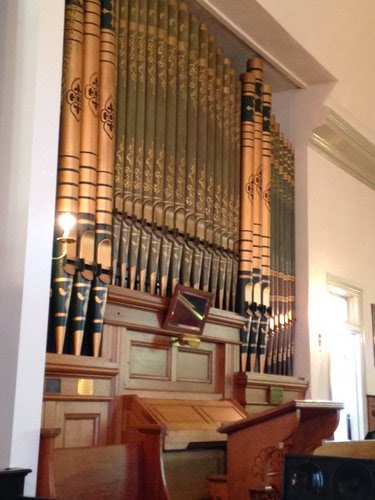 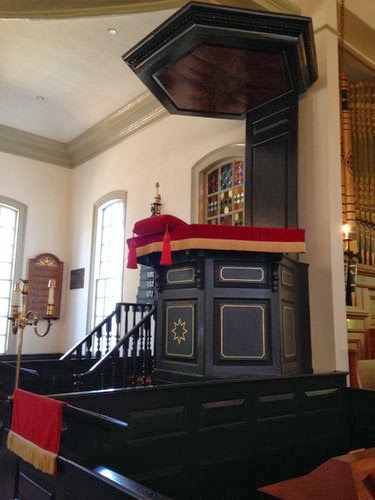 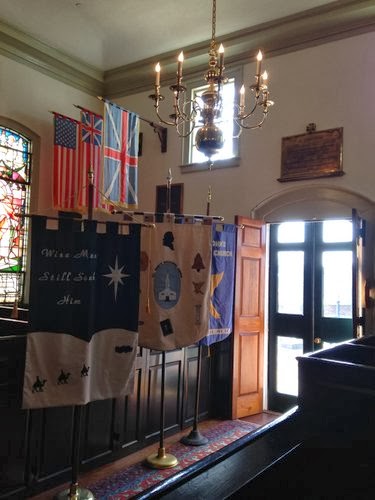 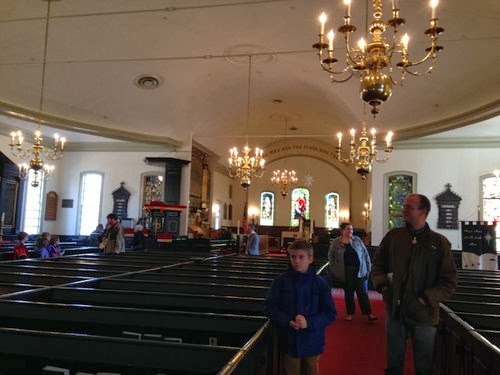 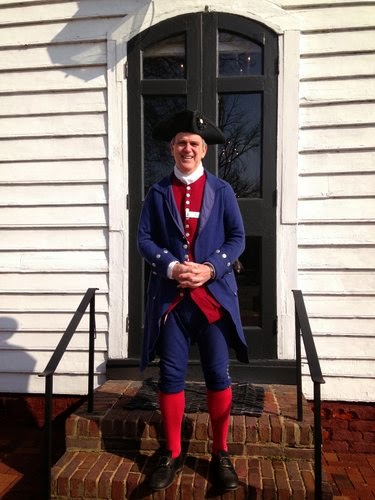 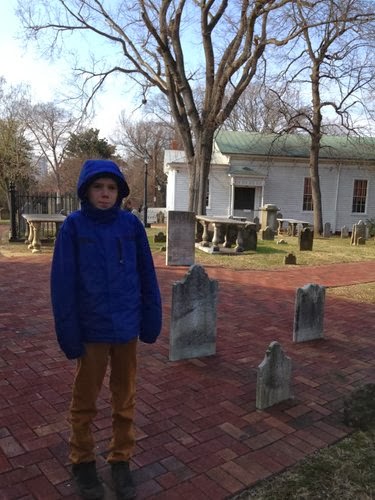 And, there, I DID get my "Benedict Arnold burned Richmond, oh-yes-he-did" moment in, too. 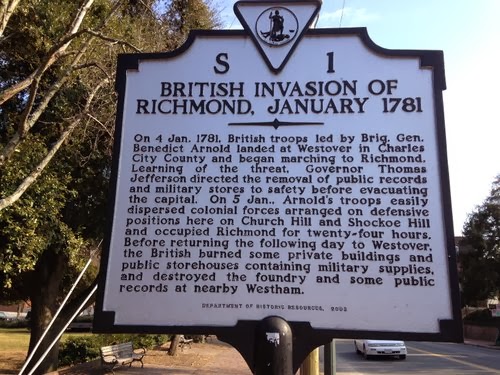 More snow's coming... As much as I enjoy being a tourist in my hometown, I am itching to head home, to the off grid prefab passive solar house.