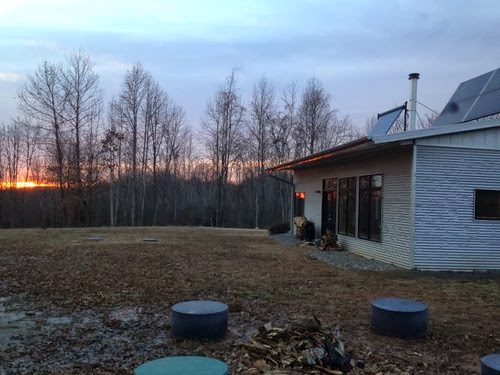 It was an uneventful week at the off grid modern prefab house. Passive solar design, combined with  a SIP prefab home, make winter... now that I have this whole off grid thing under my belt [*without generator backup even*], well, it's pretty much... boring. 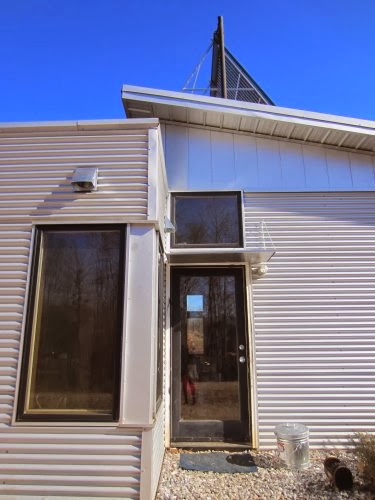 Outside it was cold, inside the prefab it was warm. *Yawn.* As usual, it was in the low-to-mid twenties at night, as usual, I didn't even bother to keep the wood cook stove going after I fell asleep, and awoke to the mid-60s.

The off grid prefab house might be boring in its energy efficiency, but this week Lloyd Alter wrote an article, "In praise of the Dumb Home," which made some good energy efficiency points regarding technological gadgets created to regulate your home's environment.  Even if you live in a SMART energy efficient home like we do, that doesn't mean we shouldn't embrace non-tech practical solutions for keeping warm, eh?

When we moved to the land the first thing I invested in were down blankets that WORK. Most bedding these days is not made to actually keep one warm, much less toasty through lower temperatures!

So yes we live in a passive solar, energy efficient SIP house. But we still embrace the down blankets, thick wool sweaters, and GOOD SOCKS. : )﻿ 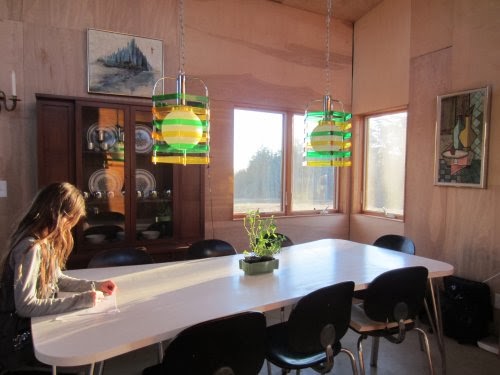 
'Insulation of the body is much more energy efficient than insulation of the space in which this body finds itself. Insulating the body only requires a small layer of air to be heated, while a heating system has to warm all the air in a room to achieve the same result.'"


This week, there was no "progress" on the prefab's interior finishing. With New Year's, we pretty much are done covering the SIP on the interior, which actually, now that people still want to see the SIP, worries me a little, but... not too much. You can always have pictures, right? 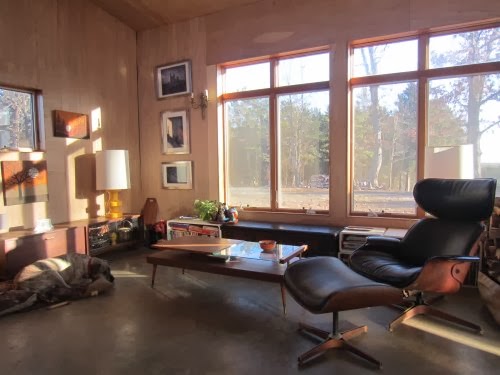 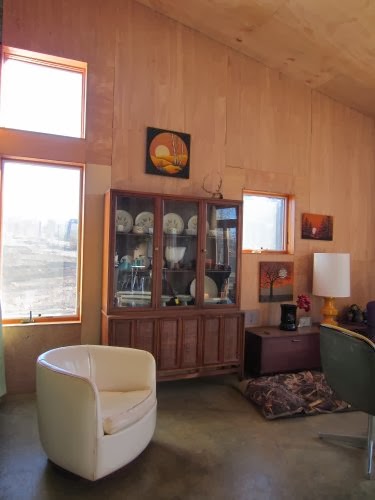 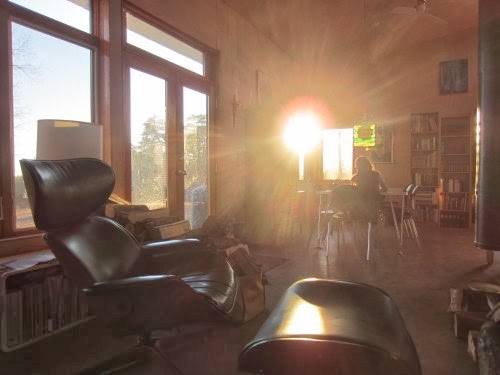 There are a *few* areas remaining of exposed SIP before being covered up with plywood, but they're tiny:

No, really, the areas of exposed SIP within the prefab house at this point are tiny:

It might be uneventful at the boring-ly cozy, energy efficient, modern prefab home, but it's never uneventful in the country. 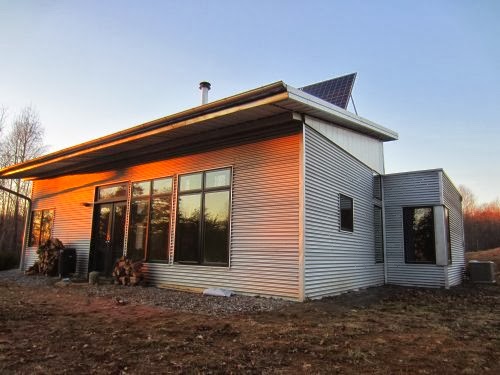 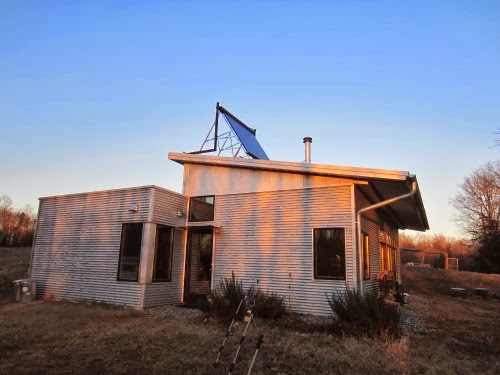 The kiddos had a grand time corralling a neighbor's escaped horses, donkeys, alpacas and goats this weekend! They were just doing the usual Amish Errands, when all of a sudden there were Horses! Goats! Alpacas! and Donkeys! all over the road.

They rounded them up, corralled them, and they all are safe, now. The neighbors returned and the fence is mended...
But for city friends who always for some reason, wonder:
Living in the country is never boring!

Pipsqueak 1: "It was fun because it had a hint of danger and adventure. They were GALLOPING!" Handsome Husband: "The kids grabbed long sticks and whooped, and encouraged, and herded them back in like pros!" Great job, Pipsqueaks, helping your neighbors! All that round pen work paid off!

Bored, without a tv, the children learn daily about animals, and other skillz.

That's what we do, here. In fact, as I type, our children are shooting in a SCHOOL. Yes, shooting GUNS, in a school, and get awards for it! 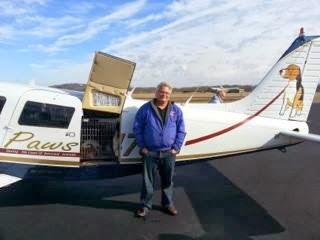 But oh: I do have an update: In case y'all wondered how Bagel The Abandoned Beagle was doing, he, now called Charlie, has been flying high.
From Friends Of Animal Control, Appomattox County:


"Who would have thought that three beagles from the Appomattox County Animal Pound would have left outta here on a jet plane? Well, maybe it wasn't a *jet* plane but it was even better! We can't even begin to thank the many, many people who were involved in making this happen whether directly or indirectly. Today, Cricket, Fred and Charlie are safe because so many people came together for a common cause. Thank you to Deb who, originally from VA and now resides in CO, reaches out to rural shelters in VA every chance she gets, to Scott 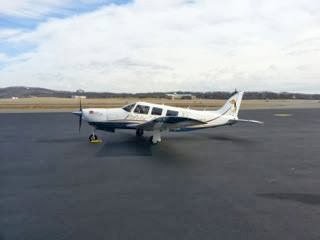 Messinger from Pilots and Paws for his love of beagles and for piloting the plane and donating his fuel and time, to Rhonda Wooldridge who drove out to Appomattox yesterday to pick up Fred and Charlie, transported them to the vet and then picked them back up today and took them to meet their plane, to Animal Medical Center in Forest for fitting them in to get their shots and health certificates, to the Hall family of Appomattox for their Wal-Mart gift card which enabled us to buy the required harnesses for Fred and Charlie (and some much needed doggie shampoo too ;)), to the Delaware Co. SPCA of PA for accepting our beagles into rescue, to our animal control officers for helping us every step of the way and to Stephanie with Southside SPCA for donating the pretty pink harness and matching leash which Cricket proudly wore on the flight. WSET News Channel 13 was on hand at the Lynchburg airport so watch the news tonight! Hopefully one or three of our sweet pups made the news! Thank you everyone!!!" 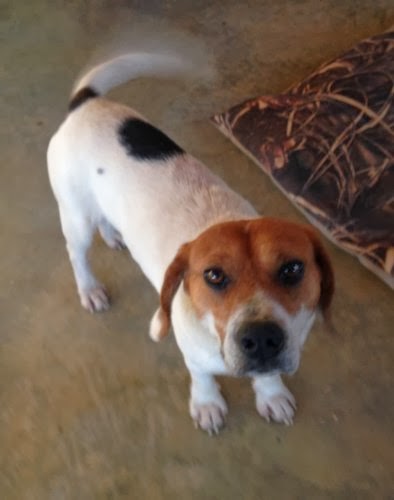 
"Five beagles that would have been euthanized were flown from Lynchburg Regional Airport to a rescue in Philadelphia Friday.

A program called Pilots and Paws arranges free transportation for shelter animals across the United States and Canada. Pilot Scott Messenger makes about two flights a week at his own expense. Messinger has flown 3,000 dogs since 2010."

See Bagel The Beagle in the video! Area Dogs Flown to Philadelphia Rescue 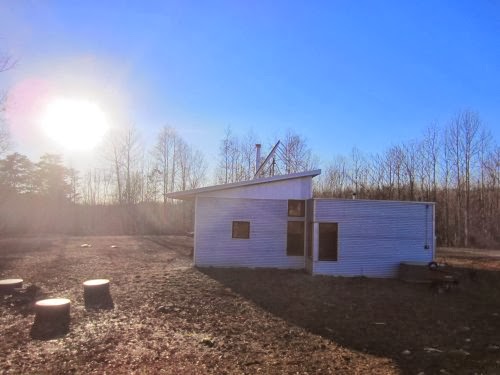 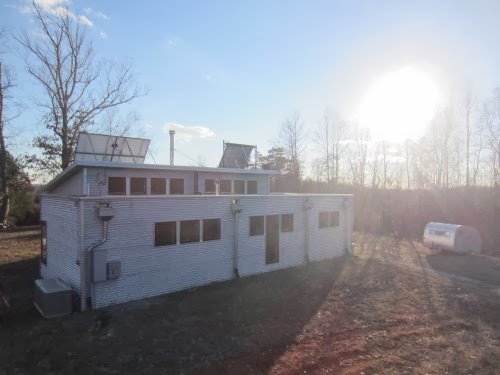 Winter #2 In The Off Grid Modern Prefab House Is Boringly Easy.Super easy. Cozy. Not freaking out any more about whatnot. 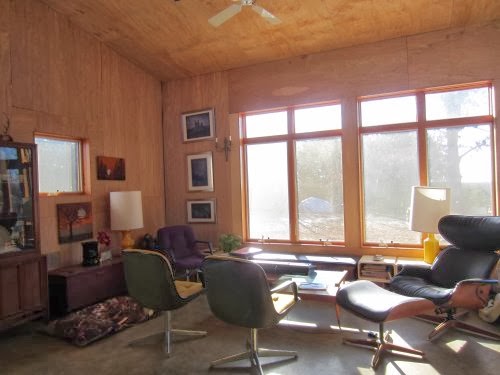 Now, we *will* add more solar panels, so during three weeks of cloudy cloud cover we will no longer be impacted, because as the children take more and more advance courses online, they can not have the "Sorry, we had cloud cover and moved to textbooks" for online courses. But aside from the extra 2 panels... that's it.

We'll finish some seams in the walls, cover the few remaining SIP areas, we'll work on the garden, we'll do fencing and bring the livestock home. 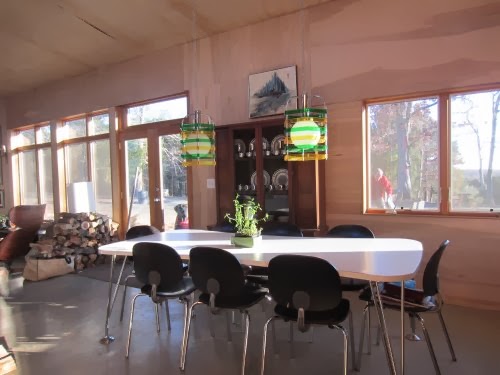 But that's it... I guess. Maybe I should just stop writing. I'm thinking about it...

In the meantime, have a recipe!

Copeland's Fake-ish Indian Food.
I craved Indian food. Indian food is hard to scrounge up in Population 40, but that's why I always have the ingredients on hand- the right spices, plus spinach, peas, potatoes you can toss together in a minute, and access to raw milk makes last minute cheese-making easy.  Indian food is an excuse to overwinter mint as a centerpiece on your table, as you often need fresh mint out of season. 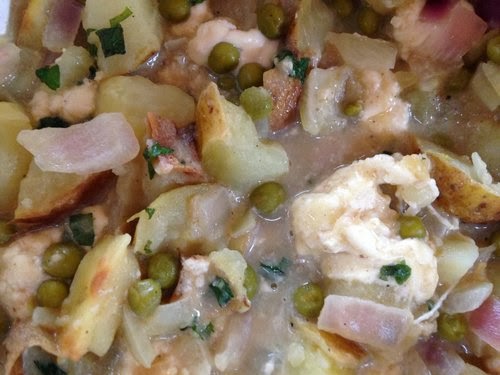 - Bake potatoes until done but certainly not overdone. Set aside until they cool enough to cut roughly into bite-sized pieces. Not diced, better sliced, but not too small.
- Make paneer in a separate pot. Note this time I used vinegar vs. lemon juice. Save the whey!
- In a large pan add a little olive oil, sautee diced onion, minced garlic, then add loads of coriander. If the onion is sticking, feel free to ladle in a bunch of the whey from the paneer and let it softly cook until tender!  Extra hot whey can be sipped in a tea cup- it is rejuvenating on a frigid day, and is useful in so many ways!
- Sprinkle onion mix liberally with coriander.
- tangy!
Add in potatoes to the onion & whey mix. See, to create the paneer this time I used apple cider vinegar, so actually not only does the whey add good nutrients but a kind of English Fish & Chip-ish Idea-
- Simmer in (liberally) peas...
- Drain the paneer from the whey [I am SO LAZY I do not even get out cheesecloth, just pull it out with a slotted spoon, toss it onto the cutting board, tip off the excess liquid, then cut it up (which also leaves in the vinegar taste vs. washing it after draining properly & squeezing in cheesecloth BUT I AM MAKING MY LAZINESS WORK FOR ME in this recipe by allowing the vinegar to add to the final taste! Ahhhhh HA!)], sprinkle over the potato pan mixure.
- And finally, add in minced FRESH mint leaves.
- Salt & pepper to taste, then let everyone go to it with their favorite hot pepper sauce on their own serving! The hot pepper, over the potatoes, is a treat and makes it for me; the children, not so much. 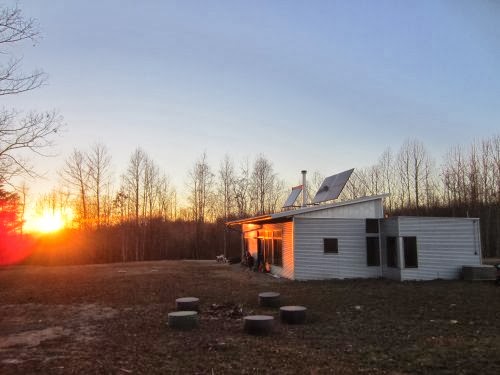 Well. Someone just totally died out there... That was the most dramatic take-down I've ever heard, *ever.* Daaaaag. Should have known when the coyotes were already yipping during the day, today... Hope no human is out.

I'm guessing it's the remnants of the abandoned starving hunting dogs (F* you unethical hunters) meeting the coyote packs, one... by... one.

My throat is sore from running outside and just screaming, yelling, baring my teeth and roaring "OFF! OFF! *OFFFF! YOU STUPID COYOTES!* F YOU, YOU STUPID HUNTERS LEAVING DOGS BEHIND TO HUNGRY  PACKS OF NATURE!!!!!!!!!!!!!!!!!!!!!"

It died, shrieking.
It was... so bad.
It's all quiet now so I'm guessing the pack is feeding on it.

I'm glad Bagel The Beagle went on a plane and landed in Philly, to be adopted instead of eaten.

Ah, the weeks after rifle season... Horrid unethical hunters dumping dogs and think that someone will adopt their discards... I should have known when I heard the yip yip yipping today, hearing coyotes hunting loudly during the day means something unusual is going down... Wish it were the dog owners experiencing it.

Well, it's done now, somewhere in the woods a poor creature is now beyond, out of its misery, and feeding a pack. I'm ok with nature, it's just the ignorant tipping point of how irresponsible actions sway the environment that bothers me, in this case, coyotes. 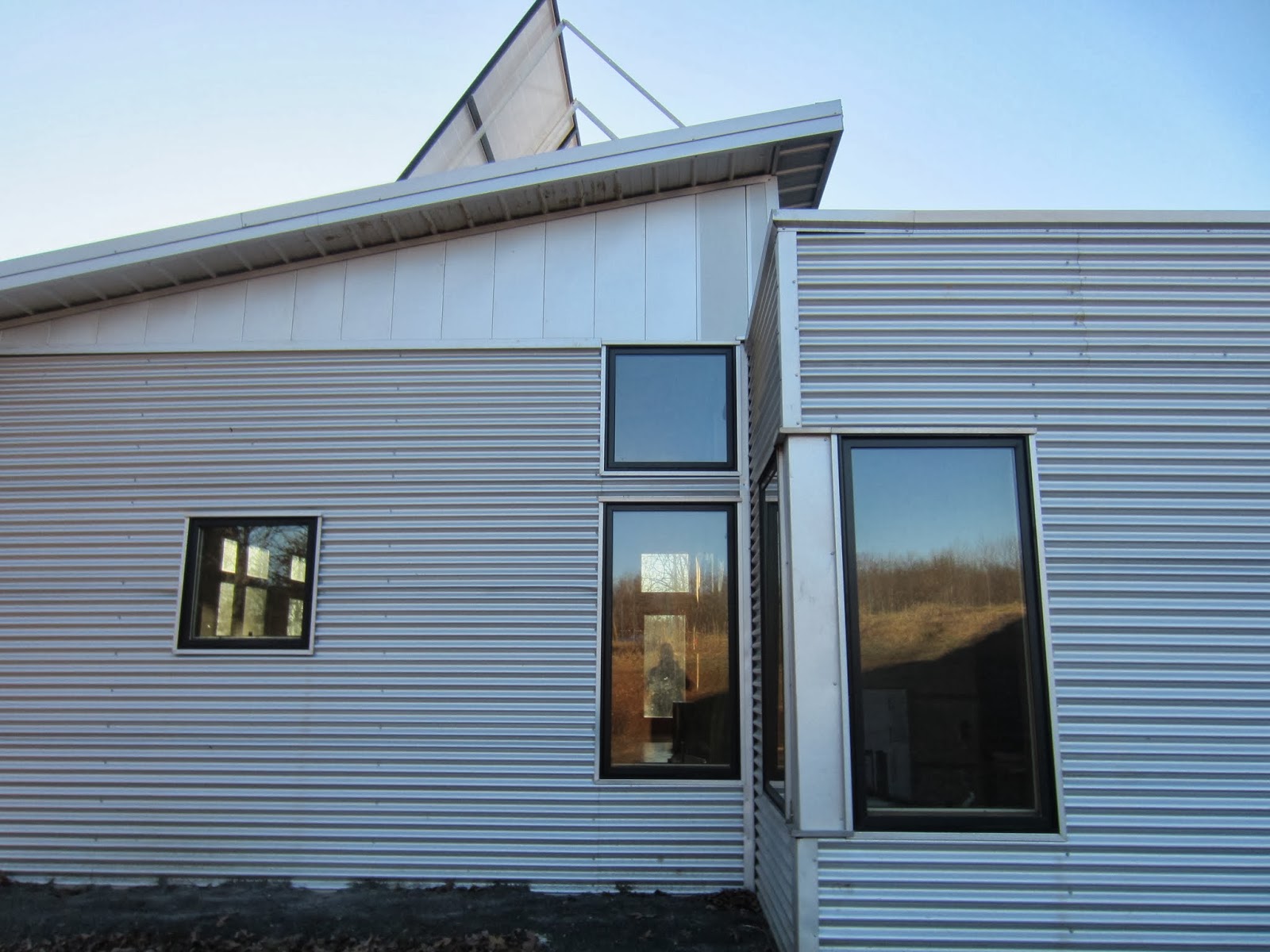 I can't imagine any of you being bored, but a boring Week? That's great Week in my book!