Prefab Modern Home Heads Out For Holidays And Returns Hunted 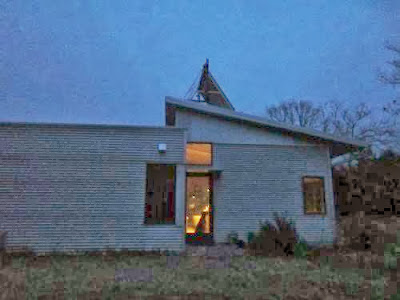 I hope the holidays are good to you. 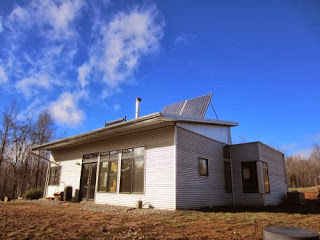 We left the off grid prefab house at 76% in the solar battery bank, and returned to 100%.


Leaving the off grid prefab house for the city, our holidays were filled with lots of friends, and family...  It was the perfect mix of baking cookies for friends (pretty much all of which were eaten by The 100 Pound Puppy if you wonder why you received none), making the rounds, visiting those we love, happily reunion-ing up with old friends returning from L.A. / NYC / DC... but with adequate watching-movies-in-your-pajamas time for the week to remain restful.

We had planned to remain at the modern prefab home until the 25th, but decided to head in early, with Nephew 3 on holiday leave in tow, leaving our vintage tinsel tree, with family ornaments, behind, since there was rain and, well... there was family stuff to do.

Thanks to Nephew 3, we dragged a little bit of home with us, to the city: A straggly stray cedar sapling that, once hauled into RVA, Pipsqueak 2 bedecked with hand-drawn-on-construction-paper ornaments with a lone strand of vintage lights.

Santa came.
The dogs wondered what the verdict would be:
"Were we naughty or were we nice?!?!" 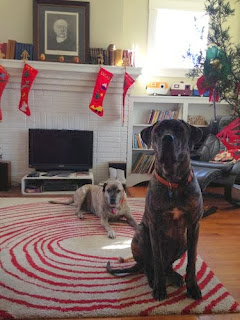 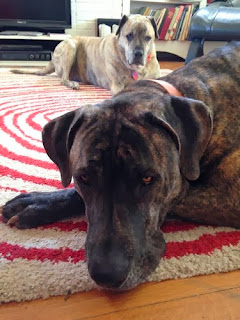 Thankfully, no one received coal, and Santa also brought us socks. Lots of socks, thanks to the Hundred Pound Puppy... who... has... eaten all of our socks. 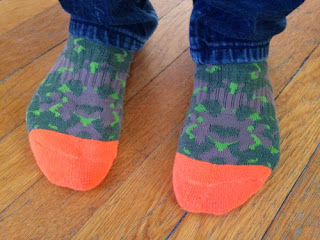 I received a book on BEE KEEPING! Most of our farming friends keep bees, but we had been hesitant to do so due to Handsome Husband's allergy.  A friend then told us that keeping bees helps keep away the yellow jackets and wasps. We prefer the more docile honeybees, knowing where their hive would be, to the latter!

The most touching present was from Morgan, who hand made bracelets from Riata's mane for us. 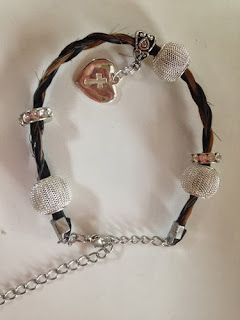 And so the story of Riata comes to a close, forever in our hearts, close to us always.

Santa also brought my Kenyan little brother, Kippy, to us!
After all the fuss and festivity, Kippy and I always sit up late, quietly talking, talking, talking farming in our pj's.

This time we were talking about his family farm's methane digester, and how, as a child, it was his job to feed it! We were going to make a video with Kippy explaining everything but then ended up going to Sister's for football and beer. (Go, Seahawks!)

SO.
Here's an overview on how another dairy farm like Kippy's did it:

Christmas was spent jollily racing from my parents' house, the old family farm, a friend's for dinner... all in one day. 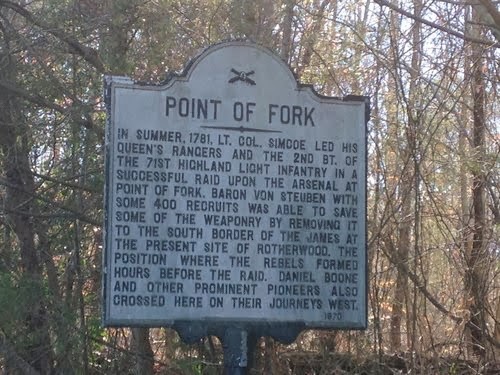 As great as the holidays are, it was also great to know it was time to come home, to don pj's, with no schedule or plans! 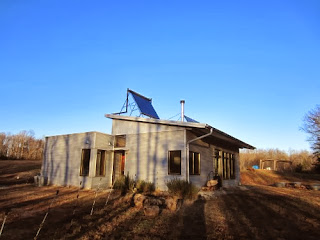 But returning home to the off grid prefab house, we were devastated to see feathers in the field... And, just as we parked, a thin hunting dog, with a tracking wire, twenty feet away from our remaining...
*FOUR*
chickens. 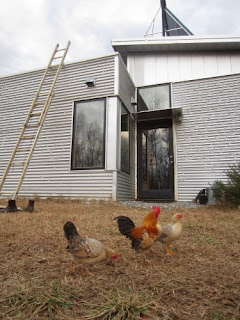 The free range flock within and around the electric fence have worked so well all this time...
Until rifle season, hence when thin wired dogs are loosed across our land.

These dog-running ignorants are not hunters.
They just sit there, lazy against their trucks on the roads they have no permission to be on with their trackers, telling you, "I'm jest pickin' up mah dogs!"

I grew up with real hunters. We would not give those people the time. of. day.

Until now, our ecosystem at the prefab house had been humming.
Now, we are ROOSTER-less, with four remaining hens.
This is terrible.  I was expecting that flock to begin self-propagating this spring, they were all doing *great.* Now we're back to square one, after all that work.

Improvements will include extending the electric fence...
We had thought we would have the livestock fencing and run-in up by now, providing more protection from predators in winter...

But the only predators that really were successful were these human-brought HUNTING DOGS!

So fencing, yes, but that still doesn't stop the fact that illegal hunters line our roads, running dogs through our livestock.

Until now I've been on a first-name basis with the game warden, working with great friends who are neighbors to curb these illegal hunters. This year's rifle season nears its end, not soon enough, with our running off and challenging those "who have hunted here, at the G's, forever." (Who no longer own this land, as they know.) Up until now I have taken pictures, called the game warden...

From now on at the off grid prefab home, I will take a much tougher stance. 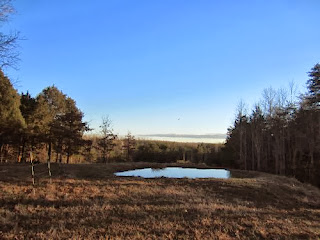