Off Grid Prefab House Under Cloud Cover, Continued. With Horses, Hunting And A Pow Wow! 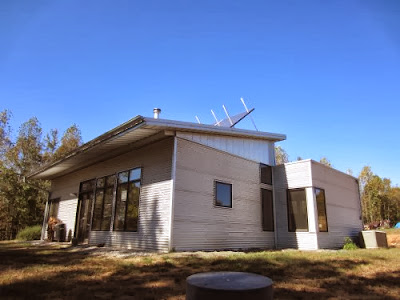 It was not a fun week at the off grid modern prefab home.
Welllllllllll, actually, thanks to our dear friends and good neighbors, it was.

It could have been difficult,  as we continued our Energy Diet through another week of cloud cover...

But good friends came forward.
"Hey, why don't you help me work the horses while your kids do homeschool over here on their laptops?" "SURE!" So we were able to do our online curriculum much more, thanks to the B's.

And then the freezer compressor broke. (YES, our off grid freezer broke.)

Our good friend, neighbor, and electrician came over to look at it and pronounced it fried. [Oh. Nooooo. I have a winter's worth of meat stored, there!!!!!]

If you haven't noticed, off grid freezers are not exactly cheap. To replace our Sundanzer 5.8cu ft. freezer will be about $1,500, when we're trying to finally finish the interior of the prefab house.

It will take weeks to either fix OR to purchase and have a replacement off grid freezer delivered.

It's not like you can just run into town and grab an off grid freezer, you know...

The W's called: "S. says, 'Run to the store, buy a cheap normal freezer, and plug it up on over at our house until you get it fixed.'"
And then? Our friends the A's: "Yeah, we have a freezer you can use until that thang is fixed..."

OHHH I AM GRATEFUL FOR GOOD FRIENDS.
(Note: None of them want money but seriously if they are doing us a favor that I would receive an invoice from, from anyone else, then I want to make sure they are not just good neighbors and good friends but *compensated.* Because I'd have to give that money to a stranger providing the same service, so why not pay those I love, locally, keeping my dollars in the community? Whether it be an electrician friend coming over or friends offering power for weeks for the meat, they are saving us!) 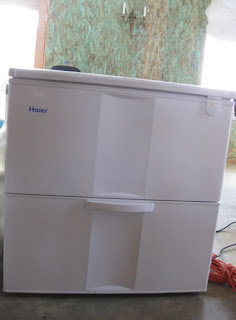 Thinking about the broken freezer made me also think about our chest-freezer-converted-into-an-off-grid-fridge. It has worked really well, but there are two drawbacks:
My cousin sent me an article where a Nigerian teacher came up with an idea for people without electricity by storing wet sand in a larger, outer clay pot, and in a smaller pot in the center, keep vegetables.

"You take two earthen pots, both being the same shape but different sizes, and put one within the other. Then, fill the space between the two pots with sand before pouring water into the same cavity to make the sand wet. Then, place food items into the inner pot, and cover with a lid or damp cloth. You only need to ensure the pot-in-pot refrigerator is kept in a dry, well-ventilated space; the laws of thermodynamics does the rest. As the moisture in the sand evaporates, it draws heat away from the inner pot, cooling its contents. The only maintenance required is the addition of more water, around twice a day."

This might be something I want to make... We do want a root cellar, but that will certainly be on hold until we can replace the off grid freezer, much less finish the house! 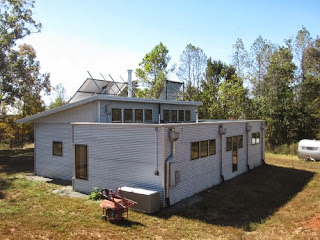 On Friday, the blue skies finally broke through the cloud cover!
The solar battery bank went from 70% to 80% in a day. 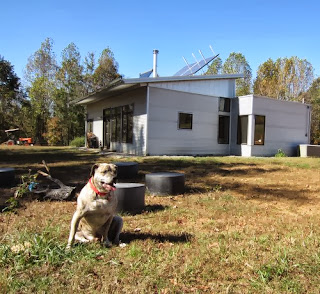 During the bright cloud cover earlier this week we would lose 3% of the solar battery bank at night, then charge, despite the cloud cover, 3% during the day. So we surfed, evenly, on an Energy Diet, through almost three weeks of heavy clouds.

This is where connecting the solar hot water booster, a Powerstar AE 3.4, comes in.
Because, solar hot water off, when you then turn it on... it takes awhile to warm up the tepid holding tank. In fact, it takes days. Having that booster is going to make the difference between a cold shower at 70degrees to a nice HOT shower at 110degrees!

Saturday, gray skies and drizzles returned. That didn't stop us from having fun:
At the off grid prefab house, it was Just Another Quiet Weekend In The Country...!

With dawn, it was Youth Turkey Day. 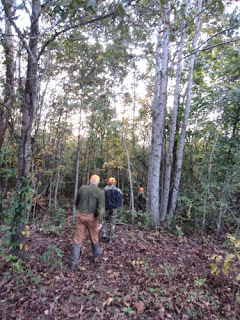 [If only they had slept close to dawn... ]
By 4 a.m. I heard Nephew 3 and Pipsqueak 2's voices, chattering, laughing, singing.
"CAN Y'ALL NOT AT LEAST SLEEP UNTIL 5 LIKE NORMAL HUNTER PEOPLEZZZZ?!?" I bellowed. All I heard back were giggles. Dag.

By 5, there was coffee, breakfast, giggling, talking, and big dogs wanting to accompany and, when refused, dramatic whining as if they were struck through the heart with abandonment by those they love.
Oh. The whining.
But now,  they were joined by the normal roosters' (yes, multiple roosters) crowing at Normal Dawn.

There was no going back to bed.

By 9 a.m., there was The Blessing Of The Hounds, an annual family tradition also known as, "Kim gets peed on, again!" She got peed on, again. It's all ok. 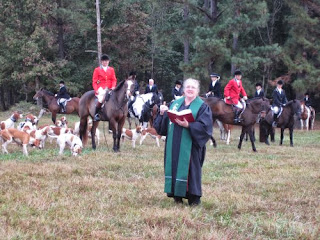 No foxes are killed (in the USA foxes are not overpopulated like in the U.K.), horses and hounds just run... usually they might chase a coyote or bear before breaking for lunch. 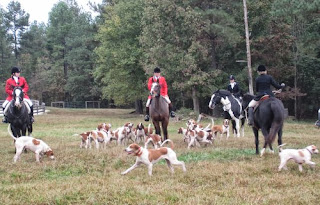 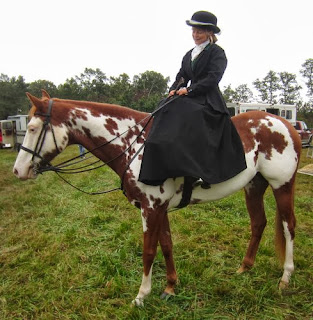 At lunch, we headed over to Autumnfest, where the Monacan Indian Nation and others kindly shared traditional dances, stories, falconry and food with their community. Many DEEP thanks to the Monacan Indian Nation for sharing their culture, stories, and dances (MonacanNation.com) with their community, and *all* those that contributed to Autumnfest- the Appomattox volunteers (the food was *delicious* and your many-jobs-volunteering seamless), the wonderful falconer from Wings Over America (http://wingsoveramericadc.org/).
Here's some pics from today. 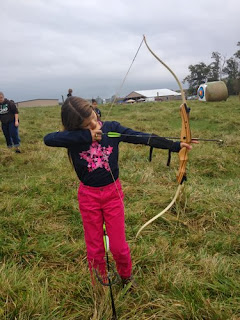 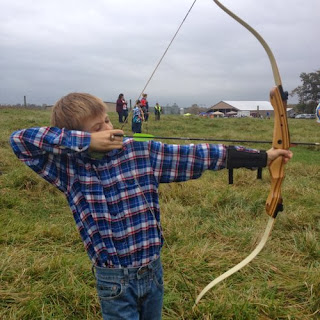 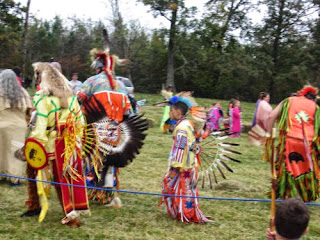 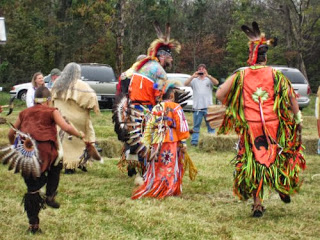 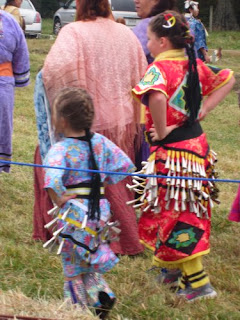 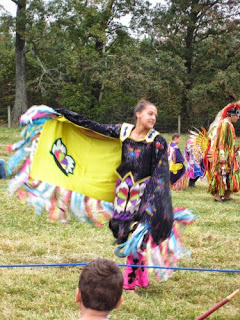 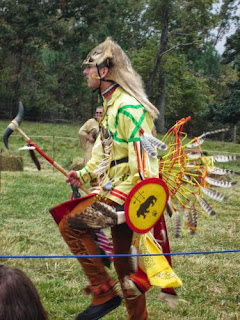 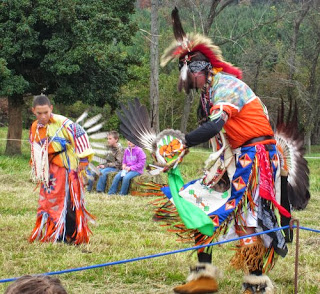 Telling you about the stories, the meaningful dances, and culture shared by the Monacan Indians doesn't do them justice. You just had to be there, so please do come visit.  Here's a video, so you can have a taste:

Now the falconer, Rodney Stotts, also has a story. 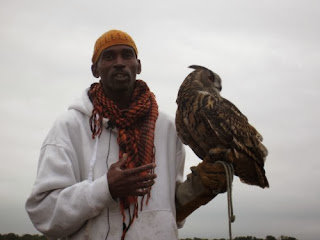 "Rodney Stotts is a falconer and trained raptor specialist. Mr. Stotts, a former staff of the Earth Conservation Corps, is a mentor and youth community leader.  Mr. Stotts creates transformative opportunities that connect youth to the environment and community. Raptors are birds of prey that include eagles, hawks, owls, osprey and falcons. Injuries are routinely caused by cars, electrical wires, habitat loss and myriad stresses of living among humans.

Through this connection is an inspiring reconnection to self and youth rehabilitation.  The Rapture Program introduces youth to new learning experiences and social engagement with peers. The organization integrates environmental education and promotes the social and emotional competence of children through structured recreational activities, positive social engagement, and learning opportunities outside of the classroom. " 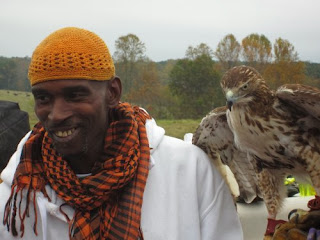 Things I picked up that might not be quite accurate because I was listening and not writing down facts and then researched this later on the internetz:
(So basically I'm going to get this all wrong and someone will have to correct me. Many reporters whom have interviewed me, on writing an article a few days later, botch facts and write them as true. SO. Mr. Stotts: CORRECT ME, I'm looking forward to getting more accurate information than my memory serves!) 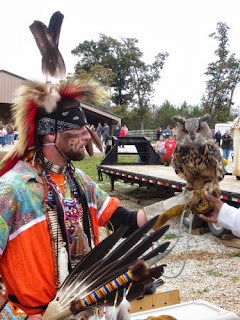 Rejuvenated from the weekend, I'm back to focusing on off grid winter preparation at the modern prefab house. I'm still wrapping my brain around the three weeks of cloud cover and that now our off grid freezer is fried. An unexpected start to final winter readiness.
But thinking over the weekend...
Ahhhhh, The quiet life in the country.

[If we had the energy, we coulda taken them into Appomattox for bluegrass and a play on Anne Frank!
I need to head into New Yawk Cit-tay just for some sleep!]

In the meantime, Pisqueak 2 is busy grinding her own cornmeal and has made a Monacan Indian Stone to cook on. AND a wig wam. 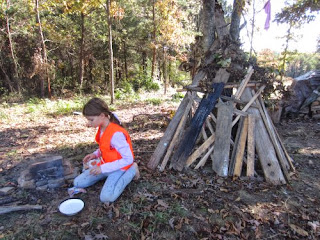 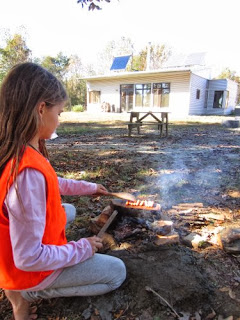 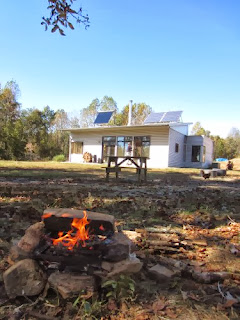 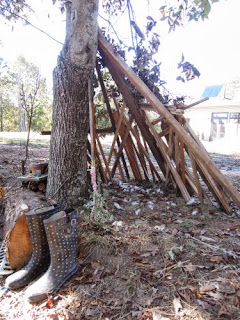 P.s. In case you wonder why there's no interior shots of the off grid modern prefab house this week, here's a sneak peak WHY I am only shooting exteriors:


Yes, it's a mess inside... Handsome Husband is busy with scaffolding, replacing a window pane, and working on multiple projects. The off grid modern prefab's interior is a mess.

In the meantime, bocce calls. 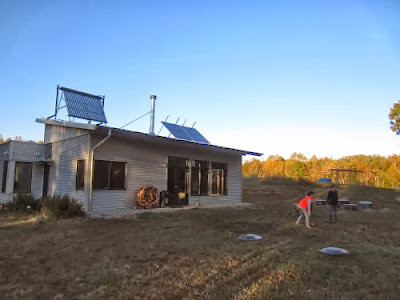 Homeschool:
You don't want to know. Python continues. I don't know for how long, and I'm encouraging it but not pushing it. It's a new *way* of learning: videos, with stopping in parts, texts to read, examples to configure, BEFORE taking a quiz vs. the easy learning he's been doing (read text, stop often, do examples, finally take the quiz.). 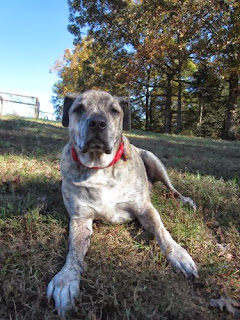 The fact we are off grid during 3 weeks of cloud cover didn't help, but I explain, "Deadlines don't care about your internet access." As Mrs. B says, "Too bad, so sad." So yeah, he might not do well. He wants to continue. Right now I'm letting him.

[It's not your normal 5th grade stuff. PLUS the quizzes take programming things he understood but throw in Pi or Interest Rates. The math and programming he gets. But interest rates in a word problem? You lose the 11 year old, lol. The important thing is the programming is still winning. In my opinion, he's doing ok for a college class.]

Regardless of what happens, I suspect higher math is going to be SUPER EASY for him for the next few years after this. Ironically? What the Pipsqueaks had learned in math in 4th and 5th grade through Adapted Minds/ Khan Academy had prepared them for the math concepts (exponents, multiplication, division, polygons, parameters...) to translate into Python. They were comfortable, known concepts before being brought into programming language. So he's having fun. 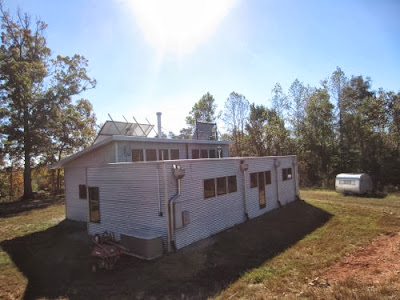