PlanetSolar Discovers Deltaville While We Continue Our Solar Journey

Each summer, for generations, our family congregates in a special place: Deltaville. With school out, it is officially Cousin Time. And Cousin Time = sailing, the sandbar, dear friends who are family, lots of crabs, and quiet moments, embracing summer, playing old organs, chasing chickens... it is a quiet, but social time.  We recharge. 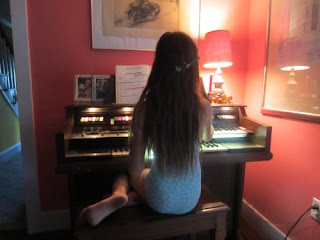 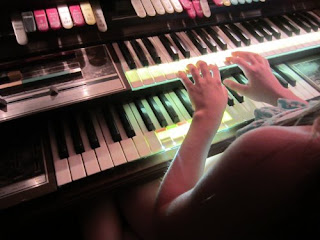 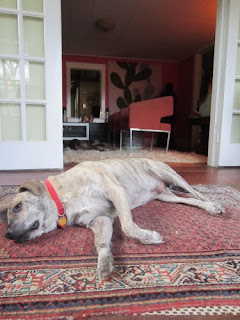 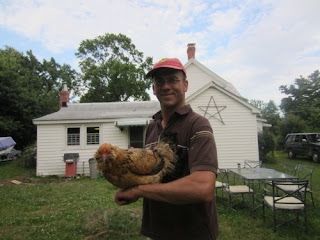 By the flags flying on visiting boats in harbor, we know Europeans love and seek shelter here... 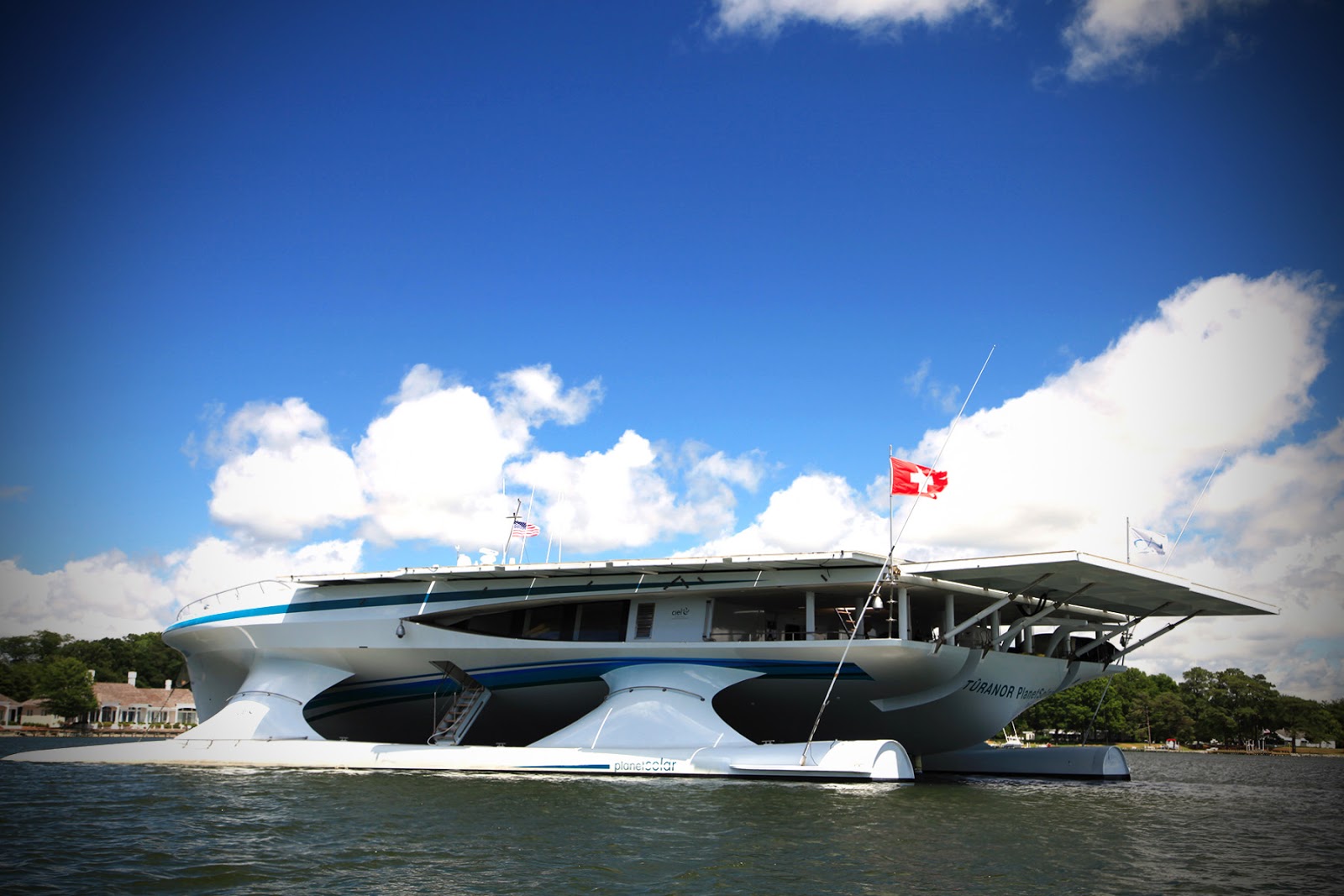 This week, PlanetSolar's MS Tûranor, the largest solar-powered boat in the world, a boat that is studying the interactions between the ocean and the atmosphere, while raising public awareness of the complexity of climate change and its impacts, stopped in our beloved Deltaville, and found safe harbor (and lots o' local characters) in Fishing Bay, thanks to our friend and sailing club manager, Dixon!


"This stop actually benefits us. Stefanie, Denis and myself take a nice walk to town and experience a very warm welcome from the local people. Upon arriving in the bay, we are all impressed by the calm atmosphere and numerous beautiful waterfront houses. Thanks to the kindness of the Dixon Cole – the manager of the local Yacht Club, we finally landed ashore.
...
We somehow feel regret for not spending enough time with this charming village and its wonderful people…"


The heart of Deltaville is in its people- generations of ALL kinds- year-'round locals, come-here's, come-here weekenders, generations-back stay-all-summer denizens.

You might recall last week's strong storm at our off grid house... 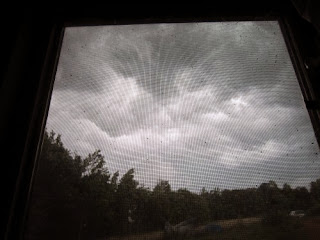 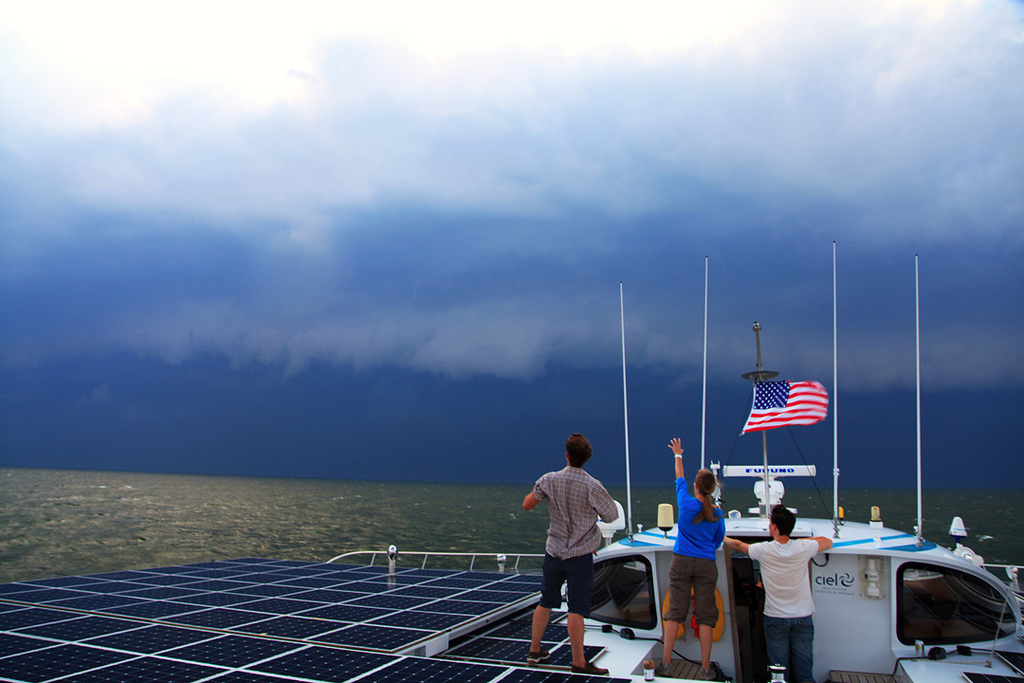 While we were at the off grid prefab house watching fingerlings of tornadoes form yet not touch ground, the MS Tûranor too saw the storm approach, as a tornado touched down...

"And lo and behold, in two minutes, the sky is covered; a sinister wall arrives overhead and absorbs us. The wind rose to 20 knots, 30 knots, a big wave rises up, 40 knots, the sea is white, it’s savage, brutal but beautiful, 50 knots, it’s heating up, the sea is flattened by the wind. We turn into the wind; the idea is no longer to move forward but rather to not be carried away by the drift. Things are looking good, I start to relax and suddenly I hear rumbling, hissing, rattling, a deafening racket, the witches ball…

And then the tornado passes by as it had come." 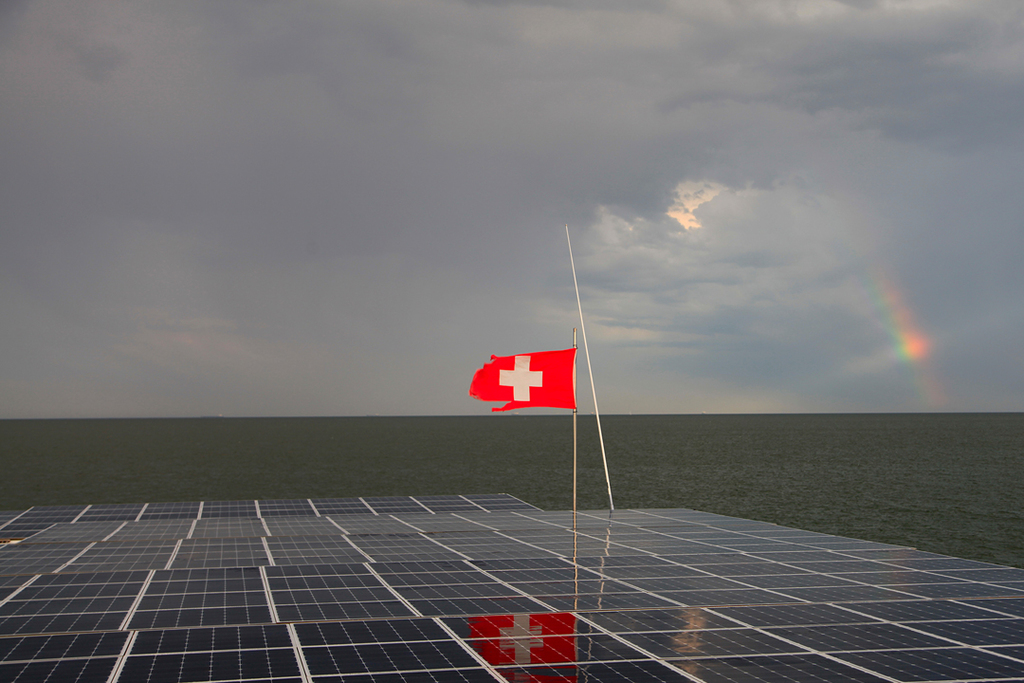 More on PlanetSolar's MS Tûranor:
Step Inside the World's Largest Solar Boat
"The three-year-old ship, dubbed 'Turanor' after a term for solar power in The Lord of the Rings, is on a tour of the Atlantic from its home base in southern France, documenting how the warming sea is shifting the Gulf Stream, a powerful cross-ocean current that drives the weather of Europe and West Africa."

So, Godspeed to PlanetSolar, and let's return to Deltaville life...
Each year, there is Sailing Camp. Now... generations old.
It is a parent-run, mainly volunteer-staffed program. 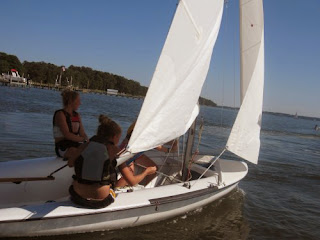 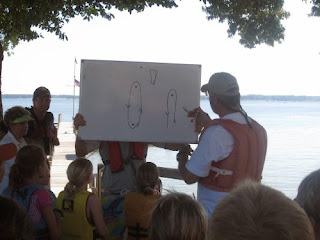 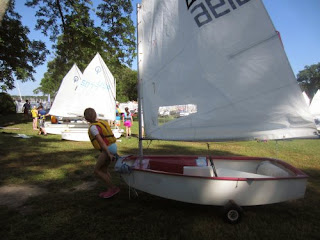 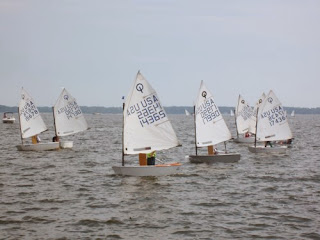 So that means that if I have been a tad incommunicado this week, it's because I can not email or telephone when I am chest deep in the Chesapeake Bay pushing boats and counseling little sailors on how to use the wind and sea. 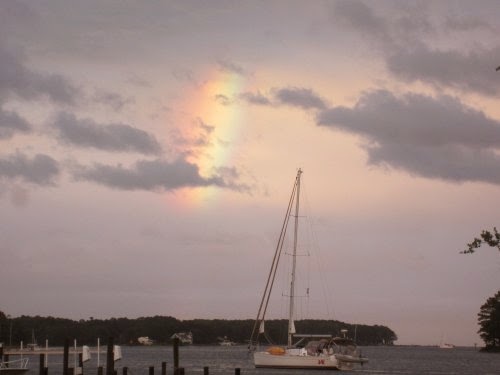 On Day 2 of Sailing Camp we saw the most amazing biggest, fattest rainbow, even at times double, pictures-can't-capture-it fantastic minutes of trying (couldn't even fit it in the frame)... it began in the bay, arched way too high over the clouds to capture in one frame, and landed... at the cottage. Here are my poor attempts, via cell phone. Ironically the fattest, most vibrantly colored part of the rainbow, over the bay, does not show up at all in these, boo! So when you look at the bay pictures, ignore the flash of white, imagine the biggest, fattest, vibrantly colored rainbow, ever, beginning in the bay, and landing at my parent's. 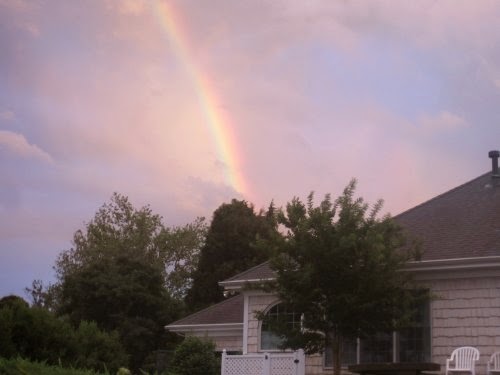 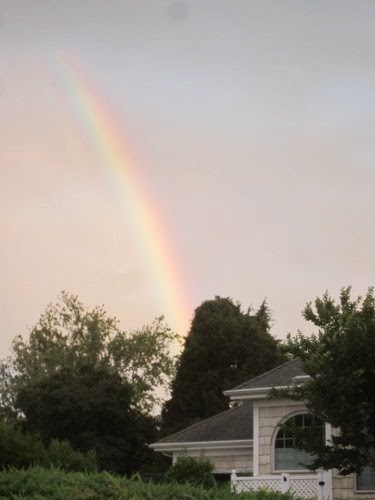 At the off grid passive solar prefab house, our next project is NOT finishing those darned walls and finally painting, but... having a livestock well dug. Then fencing, then shelter, so we can bring our horses home. Painting and styling-up will have to wait a little longer.


In the meantime, I'll be out back enjoying the super moon, dreaming of the day we finish our off grid prefab home. 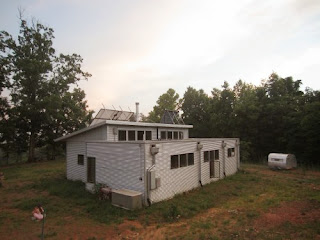 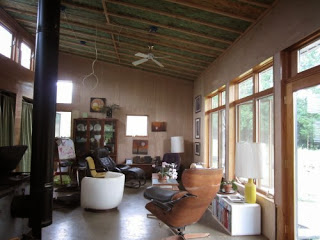 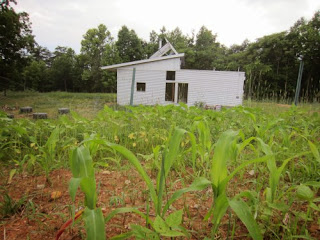 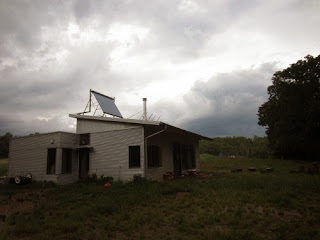