At the passive solar prefab home, spring teases with moments of "Gotcha." 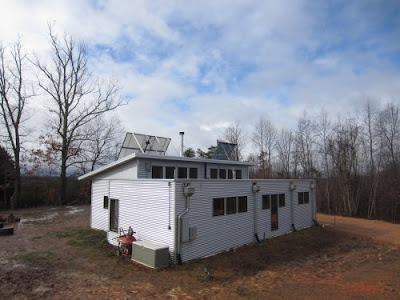 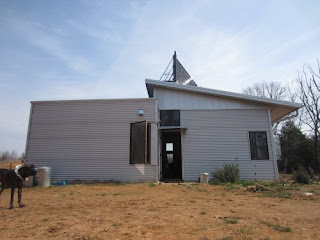 At the passive solar prefab home, spring teased us with beautiful weather, mixed with moments of "Gotcha."

Here at the modern prefab home, spring peepers and tree frogs now sing, yet we had an unexpected ski trip to the mountains, with snow.

'Round here, goats are kidding, chicks are hatching, foals are born, and mid-week, the off grid prefab home was rarely utilizing any heating aside from its passive solar design.

Solar hot water becomes easier, now that the weeks are not so overcast. THAT certainly helps... 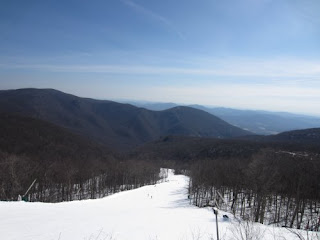 The week brought pleasures after a weird, wet winter.  A trip to the mountains with a dear friend, which had received 30" of unexpected snow last week at the end of the season, resulted in glorious powder, sparsely populated by skiers, perfect for the children to ski. We had a great time, but oh, prefab home and horses and land and trees and community, we missed you!

What a fun three days!
The children skied, and even the moms got some hiking in. My leg is still black and blue from ankle to knee from being thrown, so no, no skiing for me... 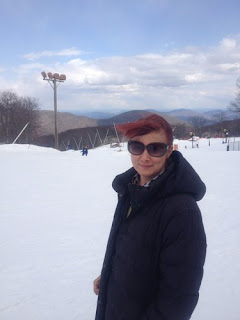 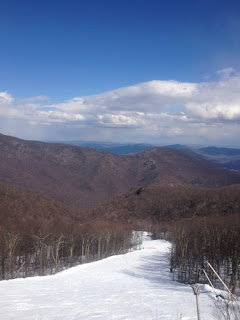 We returned to discover that without us as distractions, the electrician had installed SO MANY LIGHTS now onto switches and no longer cords, plugged in!!!! KUDOS PAT!!!!! 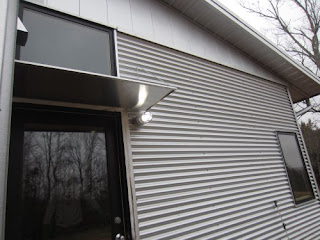 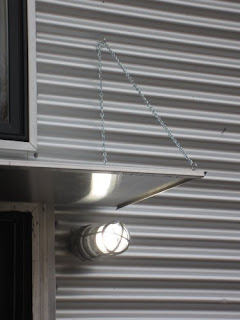 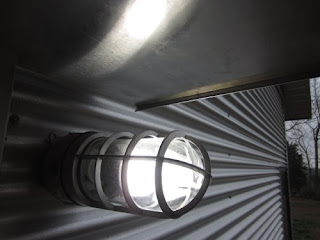 And Interior Lights without unsightly plugs!

The rainwater filtration now conveniently switches "on" and "off" from the kitchen island instead of unplugged and plugged in from a child's bedroom! Of course if we were ON grid it would be constantly on and not matter where the outlet is. But for those of us who watch an off grid battery bank draw of power, having switches to conveniently turn on and off things that draw power is a BIG bonus. 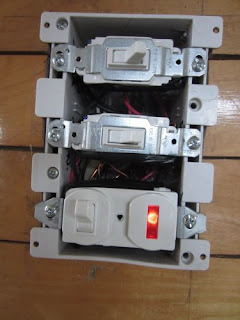 Hence, off grid convenience and function was furthered, at our modern prefab house. 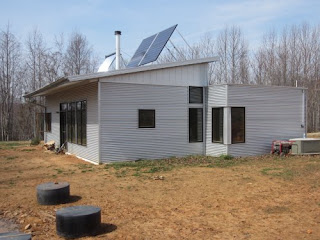 Also at the modern prefab home I am thinking fencing, and, as always, improving pasture for Higher Ground.

I'm also exploring mob grazing livestock, and how to integrate it into my plan for horses, when they eventually come across the street, home.

"In rotational grazing, pastured cattle are moved to a new paddock every few days. In strip grazing, a paddock is subdivided into fenced-off strips, with cattle having access to a new strip daily. In mob grazing, each strip is further subdivided. The cattle are stocked at an extremely high density (hence the term mob) and moved several times per day.
From HobbyFarms.com:


“[Essentially,] they get four meals a day as opposed to one big meal a day or a whole acre of land every several days,” explains graduate student and research assistant Margaret Dunn.

Over time, mob grazing is believed to have profound ecological benefits; studies have also suggested that mob grazing increases legumes, promotes the even spread of manure, minimizes erosion and maximizes carbon sequestration."


Farmers Tell Cows “Go make your own hay!”
"More than 100 area farmers braved soaring summer temperatures on Wednesday to learn more about new grazing techniques being used at the McIntire Cattle Company farm on Tilthammer Mill Road near Millwood, Virginia. Farm owner Andy McIntire told the farmers that with ever increasing equipment, fuel, and labor costs now is the time to shift the burden of hay harvesting from the farmer to the cow.

'Every bite of grass that a cow takes will always be cheaper than a bite of the cheapest hay' McIntire told the farmers.

McIntire, along with cattle farmer Robert Shoemaker, Natural Resources Conservation Service Forage Specialist J.B. Daniels, NRCS Forage Specialist and Virginia Cooperative Extension economics specialist Gordon Groover explained how the use of modern grazing practices not only will put more money into each farmer’s pocket by reducing the need for hay, but can also pay significant environmental dividends as well.
...
McIntire’s said that the key to the mob grazing philosophy is carefully monitoring exactly how much foliage the cows are allowed to consume in a given pasture area before the cattle are moved. McIntire says that he uses a combination of permanent and moveable fencing to make sure that the cows only graze exactly where he places them and for only as long as he wants them there.

The result is that the critical top two-inches of tender regrowth soil area is never destroyed but instead is covered with an even layer of cow manure and urine."


"Kate and Meisha doing their part to build top soil that will grow healthy grass that will sequester carbon. Because their guts are healthy from eating grass, they won't be belching methane like their cousins who eat grains at the factory farms and feed lots. You could call Kate and Meisha 'climate heroes'"

Back In My Homeland O' Richmond Towne... 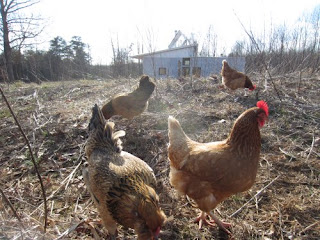 I might be at the passive solar prefab home, happily ensconced with numerous chickens, and maybe EVEN a rooster or two, but I continue to work hard at Continuing Edu-mi-catin' of Regional Richmond, for others who ask nicely for this sustainable, basic food right to have a small flock of urban hens.

What opposition. At over 1,300 signatures FOR urban hens, one person counts as an "opposition." Ok maybe I'm rethinking investing in RVA again even if this passes. Because if after over six years of edu-mication, with no leader looking (especially on their own, wow, shouldn't they subscribe to some kind of National Board O' Supervisor / City Council Magazine Of Issues or something?) at what zoning has successfully addressed in other cities...I just can't help but think: Richmond. What a...
Po... dunk...town!
How does *any* issue progress there?

All it would take is fifteen seconds of googling urban zoning for the issue... yet this city council person doesn't...

Every city leader should take a course in urban planning, zoning, and note how cities they admire compare to their own zoning. What they don't see is that every "More Livable" City their leaders visit, usually much larger than RVA, much more colorful and interesting and visited by cultural tourists... allow hens. Start with the zoning, folks, to see why interesting and creative people *flock* (ha) there...
In the meantime I will continue to plan the 4th Annual RVA Coop Tour... without them.

Back At The Off Grid Prefab Home...
Just as we talked about baby chicks and more planting, the weekend ended cold. And rainy. The horses donned blankets, the cookstove came again to life.
Spring teases.
Readying for weather, I noticed my logs are disappearing.
Suspiciously, a backyard Village sprang to life.
SOMEONE made a village...out... of... logs. 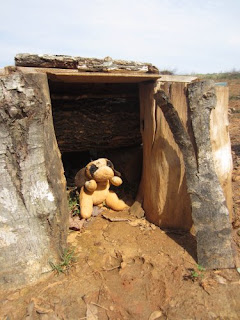 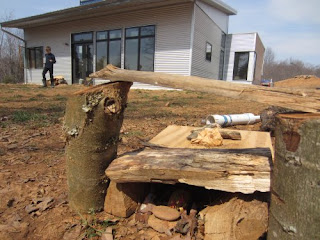 And the picnic table?
Is now a horse.
Literally. 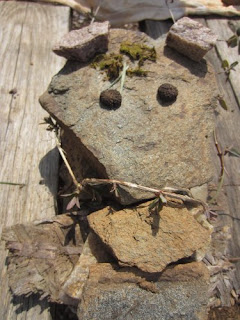 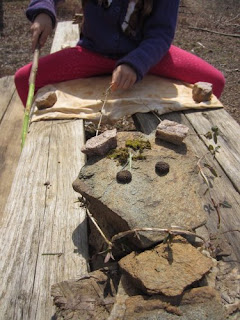 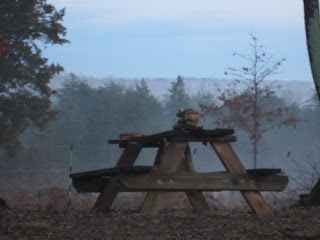 We are starting to explore the countries of the children against whom we competed earlier in World Math and World Science Day. It was not as easy as I assumed to find videos giving an overview of a nation. Here's what we've done this week:

Looks like it's going to be a good week to curl up, cozy, with stews and fresh bread, quietly happy without adventure.  May your wood be dry and your dog's paws stay clean. 'Till next week... 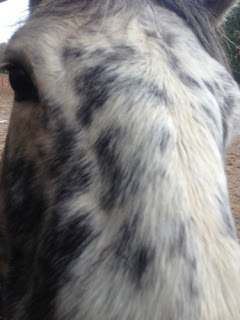 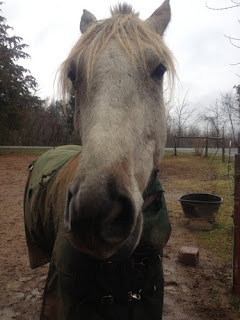