At The Off Grid Passive Solar Prefab Home, A Sad Week. 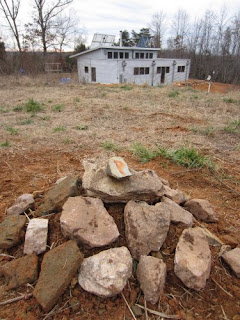 Right before we readied to ring in the New Year at the passive solar off grid prefab home... 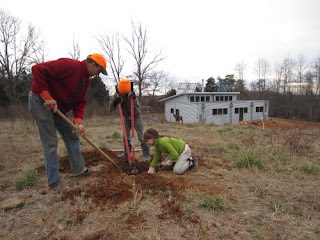 We knew our Peruvian Inca Orchid had already outlived his breed's life expectancy.  But when you know a dog like Pachacuti, you think he can do anything, including raising your family a few more years.

Late morning, we were telecommuting, tap tap tapping at our laptops, when Pipsqueak 1 yelled, "Come quickly, there's something wrong with Pachacuti!"

Pachacuti was curled up on his dog bed, as he had been comfortably just minutes ago... but it was clear he was in death throes... it was like he was breathing through bubblegum, his features sunken, eyes vague... It was clear he would never get up again.

We gathered around him, even the dogs, patted him gently, and told him how much we loved him.

We buried him where the field meets the prefab house's home site, so he can continue to overlook us all. We are heartbroken, and the house, even with the chaos of ShopDawg 2, ShopPuppy, and Pipsqueaks, is much, much more quiet. We are grateful for every second of the 14+ years we had with that (difficult, didn't think he was a canine) dog. 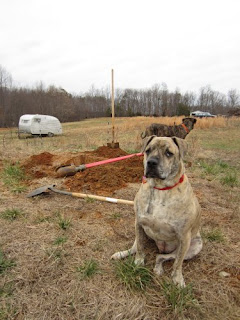 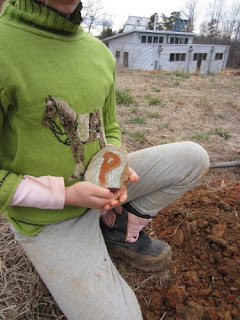 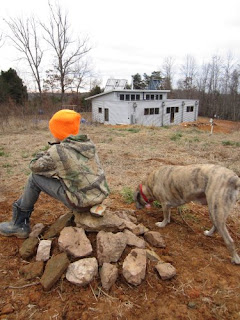 When he first came to us, he had already been bought by a Connecticut family who had beaten him (the father was allergic to hair *and* saliva, so Pachacuti's hairless-ness didn't complete his allergy dilemma. This breed bonds with one person- and the father, that "person", beat him away, psychologically damaging him...), returned him to the breeder, who then didn't want him because he was not "perfect" (with one ear often askew instead of standing). And thus, we found each other, for the rest of his life.

I named our then 6 month old pup Pachacuti, a light hearted take on the formidable Pachacutec.
"If Pachacutec could solidify and expand the Incan Empire, then all I ask is that Pachacuti bring world peace!"
So... it has been a sad, slow week at the off grid passive solar prefab home. Quietly, I have been thinking on other aspects of our home.

I look closely at water and energy consumption, and off grid decisions... 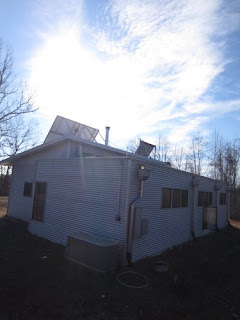 We are the only prefab home we know of, off grid, without a generator... I am balancing my desire for the prefab house to be completely off grid with my extremely modern expectations, affordably. I am not interested in compromising modern amenities. So I rate the composting toilet with a "D" during winter, a "B" during spring-fall.  And I consider the generator, how I would be less conservative in my energy use during cloudy weeks if I had one...

Ultimately you have to ask yourself, even during best conditions: What are you willing to compromise on? Water or electricity? Both? Do you want to shower next to a composting toilet? Much less take a bubble bath?  With a generator does that encourage one to lean towards wasteful energy use or does it provide ease of security for work and communication?

Currently, our water consumption and conservation running a family on an 1,800 gallon tank for potable water outweighs any spa bubble bath moment I might envision. Water conservation remains critical.  I am still watching battery bank percentages and musing on a generator.


More Off Grid Considerations: And now we have horses. 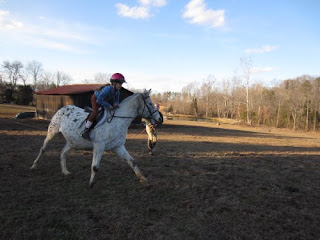 Oh, wow, really, don't get me started gushing on how wonderful they are...  I am so *grateful* they entered our life. We intend to board them at least 1-2 years across the road at our dear friends as we are still finishing Higher Ground.

There's no better time than the present to begin preparation for an off grid barn! And with that, an off grid well... At an Amish friend's house, I continued that thought. Our neighbors use air compression for many things, including their well -  it gave me an opportunity to inspect further their setup.

By the way: Here is a great explanation on how our Amish neighbors consider technology, and another article in Wired (I assure you our Amish here do *not* chat on cell phones). And here is another great synopsis:
"The Amish have the undeserved reputation of being luddites, of people who refuse to employ new technology. It's well known the strictest of them don't use electricity, or automobiles, but rather farm with manual tools and ride in a horse and buggy.  In any debate about the merits of embracing new technology, the Amish stand out as offering an honorable alternative of refusal. Yet Amish lives are anything but anti-technological. In fact on my several visits with them, I have found them to be ingenious hackers and tinkers, the ultimate makers and do-it-yourselfers and surprisingly pro technology."

[If you're intrigued further, I'm intrigued by all the posts at The Technium.]

To bring horses home eventually we will need a well in the pasture and electric in the (for now, non-existent) barn. I begin to think about that. Here is how my Amish friend runs her compressed air:
For the well 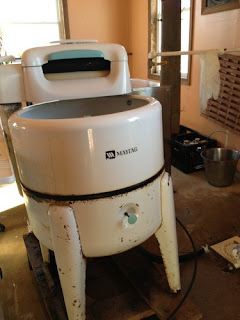 I: "What makes your ice box different than a refrigerator or a freezer?"
She explained the top shelf does act as a fridge. But below the shelf is water, and under the cold water are her bottles of milk, jars of meats, submerged... "So it's not frozen, but colder than in the refrigerator..." I noted, "Oh, under the water it also is in a more air tight, cleaner environment?" I will have to ask her about the water part next week- about changing the water how often, etc. but it really is a cool idea, like an indoor cold stream, but improved and Amish-sanctioned.

Here is the manufacturer: 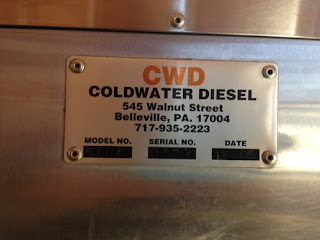 So: Despite our sadness, we rang in the New Year at the off grid passive solar prefab home.
Lamb Mongolian hot pot in one vintage fondue pot, a Mexican cheese / tomato dip in the other, and, in between, instead of a hot stone on which to sear, we set hot cast iron pans, sizzling right from the cook stove. 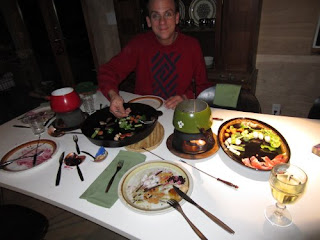 The next day? Black eyed peas and stewed tomatoes. Venison and root vegetables. Mac & cheese, and pie. A grape pie from our Deltaville vine, the grapes carefully picked at the end of summer, frozen and transferred to the prefab home this fall. 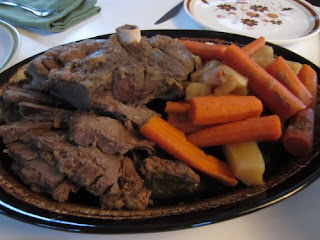 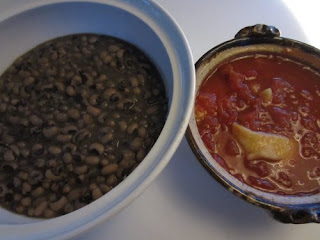 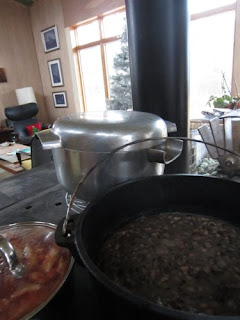 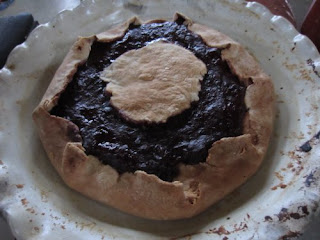 At the end of the week it unexpectedly warmed, and Handsome Husband worked on improving the terraces / replaced clay with good topsoil and amendments. 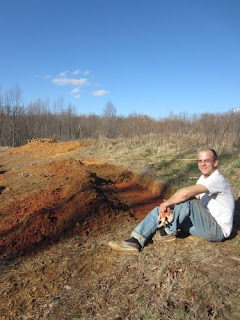 The Pipsqueaks made Chicken Ice Skates... in case it ever deeply freezes over this year. 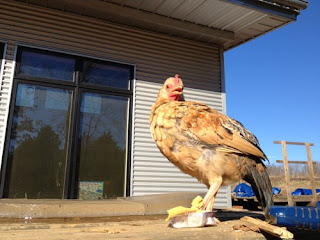 At the off grid passive solar prefab home... it is... even with the chaos... so quiet.
R.I.P., Pachacuti, my old friend. 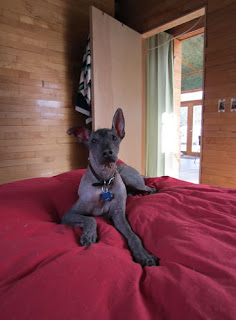 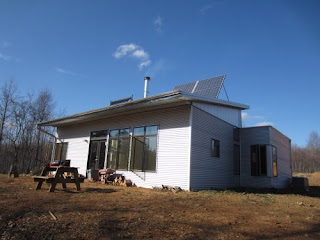 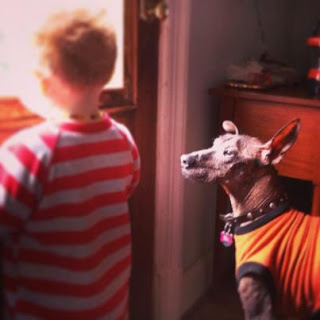