Loving Restoration And Renovation Of A Farm House Continues 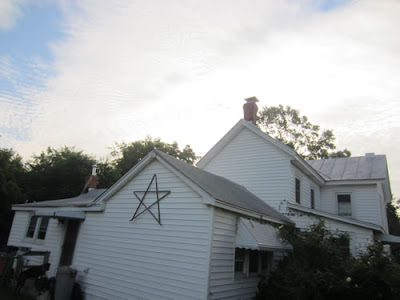 The Bachelors have departed the In-Town Ramshackle to now work on our off grid prefab passive solar home. 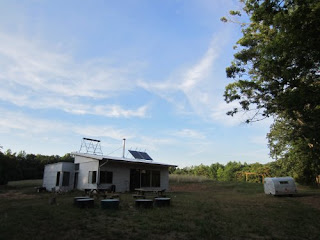 More on their adventures in the prefab green home next week, while we remain at the In-Town Ramshackle.


This week, millions are without power as huge storms swept the east coast.  We may be in the In-Town Ramshackle, but Pamplin friends have access to our solar prefab home, in case anyone needs anything. Being farmers, they all assured me they have generators, but the power for many may be out for days... and with the heat index in the 100-110 range...!

But in Deltaville, as we do each year, we lined Main Street this weekend (now fifty feet away down the lane from the Ramshackle's front porch), and cheered on the Heritage Day Parade. 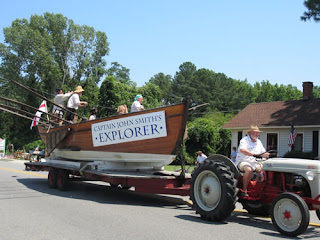 Pirates with We Ladies Auxiliary. Arrrrrr.

Their wench served the best deviled eggs I have ever had.
Being ornery myself, I wrassled her secret out:
"Old Bay mixed in, and when done, sprinkle them with Old Bay again." 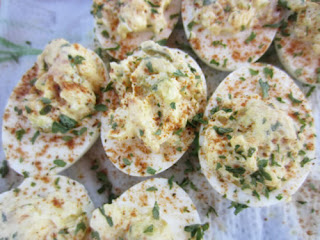 Pirate Wench Deviled Eggs
Hard boil eggs. Remove yolk, and into it mix minced scallion or onion, generous amounts of sweet relish, Old Bay, a little mayonnaise... Add the mix back into the egg whites, and sprinkle with fresh parsley from the garden and more Old Bay. YUM. Arrrrrrr! To the devil with ye! Hand me the rum!

While I'm at it, here's a gazpacho recipe that I made up that brings it back to Spain. It is influenced by The Silver Palate and Family Circle (yes, Family Circle) Soups & Sandwiches Cookbook circa 1972: 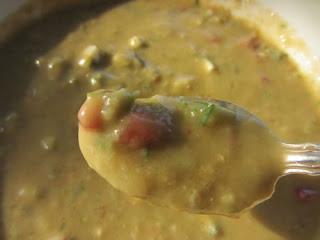 Gazpacho
6-8 truly sun ripe tomatoes
6ish small cucumbers
1 cup of scallions, sliced, or any good onions you have on hand
2 ripe, no, really ripe not firm but still yummy green avocados
1/8-1/4 cup of good olives depending on how much you like olives
good olive oil - a few glugs
red / apple cider / vinegar of your choice - a few glugs, but less than you put in for olive oil
chicken broth because you need an excuse to defrost some from winter's stash
water to thin as needed

sea salt, fresh pepper, cayenne or puree in some hot peppers to taste

I don't know why all gazpacho recipes call for canned tomato juice. Instead, add water, broth, vinegar, s/p/spicy pepper to the chopped / pureed as you prefer vegetables. Geez. Personally I'd puree the liquids + avocado + spicy peppers, then chop the rest. What ev. Yum. I'd like to mention I've never been to Spain but if I went I might eat this topped with fresh toasted bread smudged with garlic. And, languidly, noshing on bits of cheese. Under an olive tree. Lounged on a blanket. With red wine.

Back To The In-Town Ramshackle
Sitting on the porch of the IN-town Ramshackle, we watch deer, osprey, and turkey while my chickens cluck 50' from Main Street. #Citified

As I mentioned, The Bachelors, aka Tony and Dustin of Anthony Caprara Realty And Renovations, have been working extremely hard these weeks turning an abandoned 1880s farm house with leaks, mold, mice, and more into a Very Livable In-Town Ramshackle.

Here's a summary of what work has been done so far restoring the In-Town Ramshackle:
Immediately: Roof leaks corrected. Mold removed. 120 years of wallpaper scraped off of the walls.
Thinking about roof leaks and what mold lay above the ugly low ceiling tiles once the mold was removed from the walls and room, Tony removed a few tiles to take a peek:
It was disgusting.

So off the ceiling tiles and insulation went, exposing the gorgeous beams and pitched roof, opening up the room height, also improving the house function, for now heat rises into the pitch, away from the occupants... 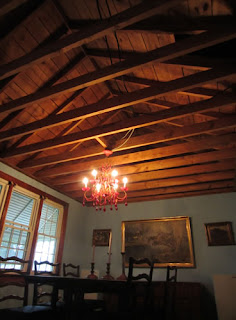 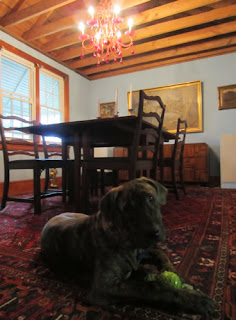 We will need to insulate later, but will do so from the OUTside, in, wrapping the original architecture, therefore also protecting it.

The worst room in the house is what we call "the L room" - a room added on later than the original 1880s home. When the homeowner was relocated for medical reasons, they only discovered months later that she had left a window open in this room... Once the mold was dealt with, the sheetrock was removed to expose the GORGEOUS original exterior of the farm house, within this newer room. It is REALLY COOL. The 1800s millwork is GORGEOUS. 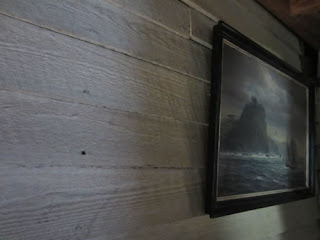 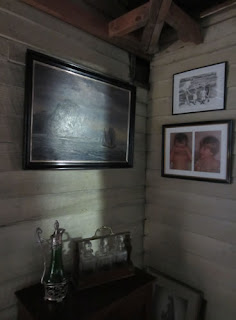 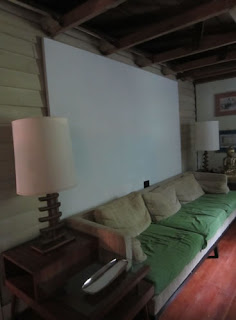 Cosmetics
Every room was painted.
Much of the wood flooring was covered in old, moldy carpet, which was then ripped out, and paste applied to the original farm house floor.

ReUse
Wood was reused from the L room for ceiling trim in others.
There were many things reused that the homeowner left behind: In the dining room, two old Captain's Chairs were repainted red to pop fresh and welcoming-ly from the corners... 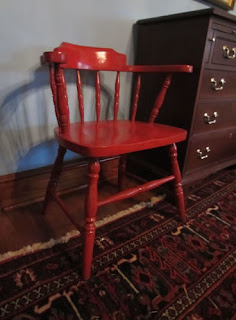 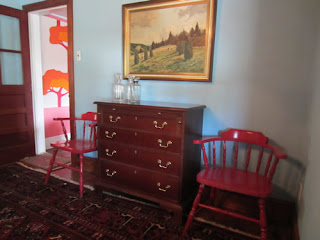 The ugly bathroom linoleum was repainted with attractive black and white "tile" - no need to spend money on something new when it is clear we will have to rip that rotten bathroom apart in Renovation Year 2... 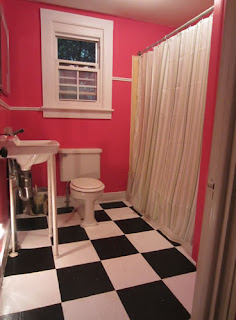 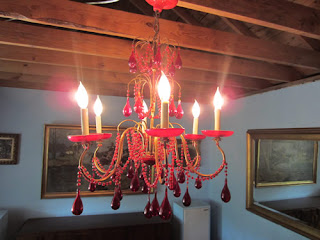 The beautiful-but-humongous two story-high camellia and rhododendrons were saved, but trimmed up so that air could circulate about them (and through the farm house windows) thus no longer causing damage and mold to the farm house structure. 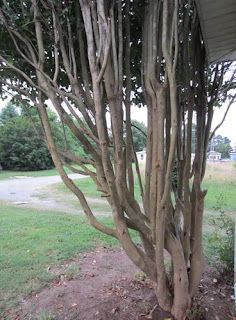 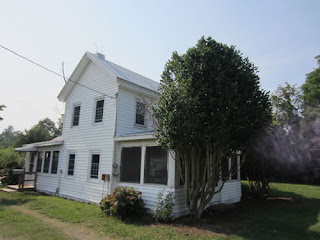 And this all before not a box was unpacked.
We are STILL unpacking. We are still hanging pictures. We still organize.
So no "Taaaaaa-Daaaaaa We Restored The Ramshackle" photos yet.

One thing I would like to point out is that my philosophy does not just consider the architecture, whether it be a modern, energy efficient off grid prefab home or a lovingly restored slowly In-Town Ramshackle, but also the entire setting: 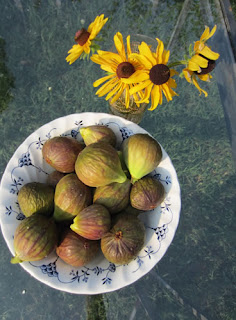 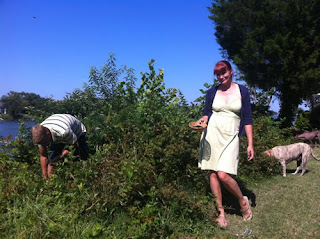 How sustainable is architecture without food? So we also must consider the chickens, the fruit trees, vegetables and herbs planted on a lot, and how, in this In-Town Ramshackle farm house kitchen, I am busy canning fig and blackberry jam, as well as pickles during June / July.