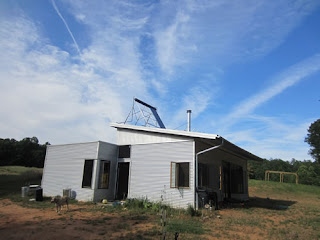 I love that it was an entirely cloudy day yet the battery bank was actively charging! That adjustment last weekend made all the difference.
Now you know our modern prefab home is off grid; we don't have water to waste. So when the cat got mad at the puppy and sprayed?  I dragged out the rug, laid it on the picnic table, shook my hand at the sky and shouted: "Bring on the rain."

The day was overcast... the rain came.
A downpour. For a day.

And then a day later?
Another storm!
Hooooly lamole. I could see that huge storm coming so went out to encourage the hens into their coop; looked up an saw, beyond the field, black clouds reaching down, like a finger... I watched: ROTATION.

Thankfully it dispersed quickly into a heavy rainstorm....  I watched the CRAZY weather and clouds thinking, "I **LOVE** this place."
It's like Montana, except in Virginia: Big Sky, dramatically, gracefully.

In the morning? Wow. Behind the prefab where I had planted rows of potatoes? Underwater. Apparently we live in a rice paddy. Good thing we graded well around the prefab home... And, as always, we have lots o' food, so who cares, the car can sit for days until it dries instead of getting stuck in the field.
Heck. I'm just gonna swim out to the Aults if I need anything, lol! (Like everyone here, we're well prepared...)

The sun came out. I packed up. And then?
We drove to the In-Town Ramshackle.
Where Tony & Dustin have been busy.

Tony & Dustin greeted us at the In-Town Ramshackle.
Last time I was here it was filled with boxes, covered with mold, and infested with brown recluse.

Thanks to them, it's not, any more.
Tony details the restoration progress and all of their hard work in the next blog post.
"Tony. Write down your challenges and then how you solved them!"
Tony smiles, serenely.
"There were only opportunities, not problems..." #MisterGlassIsHalfFull

What the In-Town Ramshackle shares with the modern prefab home is that it, as well, is passive solar.
In the 1800s there was no air conditioning, either, so architects had to know what to do to help keep things cool in summer's heat!

On Day 2 we took the Pipsqueaks to Stingray Point, where they jumped in the waves, chilly, and talked about how Captain John Smith ate the sting ray that almost killed him here, all those years ago...

I fed the boyz dinner.

Tony's Summer Squash
Our good friends in Pamplin gifted us with the first summer squash... but I'm going to name this after Tony because...
Sautee in olive oil 1" long sliced onions until soft.
Add in squash, sliced.
If it is getting brown, add enough water to make sure the entire mess is sauteed but then softly cooked until all are well happily simmeredly cooked and done. There should be more done pieces of onion and soft and more firm pieces - it's a mess! That's what makes it tasty! Add butter, mix, cooking off any water you had to add to make everything cooked.

Sprinkle with good salt and pepper. Add: Against your better judgement, TONY MADE ME and then we were all happy for it: Add softly, lightly, a sprinkle all over but not much AT ALL of: cinnamon. Gracious, it's good.

Tony: "Forget your dainty silver. GIVE ME A SHOVEL AND A BUCKET."
Certainly, boyz.

And then Handsome Husband was home. And we laughed and ate and talked late over everything.

Saturday eve starter song:
Dancing in the kitchen, drinking wine, & cooking up a storm, this is what I played:

The boyz took the children out on the vintage boat, Moby.
And darned if Pipsqueak 1 didn't show his true pirate sailor self by...
"Papi! I see an abandoned boat! I claim it on the high sea for myself and that is the rule of the sea!"
"I'm sure it's one of these people's boats on the shore..."
So they tossed a line, towed it behind them and paraded the boat around and people waved and said "No, we've never seen it..."

And that's how Pipsqueak 1 used the law of the sea, commandeered, hence acquiring his first boat, a two seater kayak, at the age of nine.
Welcome: The Minnow. 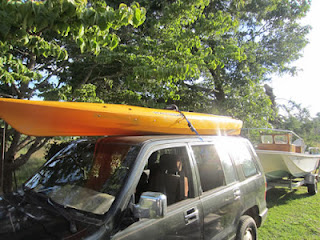 And sailing camp hasn't even started.