More Packing For The Move To Our Prefab Home, With More History Adventures, And Color. 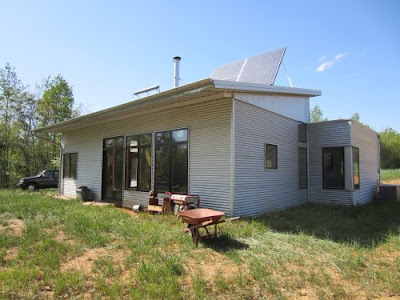 In a week we return to our prefab home construction, finally finishing the prefab house this spring.
Ah, but there's always other projects to do once this is complete... Lessee: The natural pool, fencing, chicken protecting projects immediately come to mind...

Although the prefab home could have been finished quickly, our family opted to approach it as a pay-as-you-go project, living in the mid-century house while saving up, paying for, and completing each stage. But now we sell the mid-century house, and the summer will be spent finishing FINALLY the interior walls, connecting the solar hot water (which is happening now), etc....


[Pictures of the prefab home from last week.]

But for now, we continue to pack. 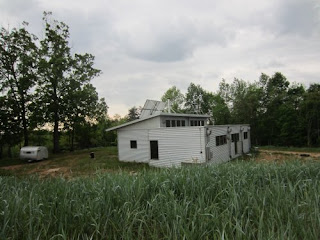 The months of negotiating the sale of our mid-century modern in the city, of, with the sale of the mid-century house, purchasing the In-Town Ramshackle Farm House in Deltaville, and to FINALLY begin the FINAL phases of finishing our prefab home, our passive solar off grid modern house outside of Appomattox... well...
We are run down.

We are stressed, no, we are frantic. Each week we pack, each weekend we haul out another trailer of belongings, all while being under construction, all while working and meeting professional deadlines, all while being a parent... and in the cold, damp spring, all while enduring colds! 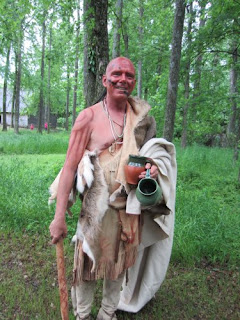 So when I saw that Henricus Historical Park was commemorating the 400th anniversary of the founding of Henricus, our nation's second permanent settlement in 1611, with re-enactor colonists and real native Americans portraying their history, when I saw that Captain Mike Ostrander (whom I think is SO cool and have admired from afar for awhile) of Discover The James tours was captaining a boat for a tour of the James River's history and wildlife, well, SIGN US UP, honeychile!


Saturday, April 28, 2012 (10 a.m. - 5 p.m.)
Pocahontas, Rocke Hall and the Powhatan People
Explore the life of Pocahontas at Henricus where she converted to Christianity by Rev. Alexander Whitaker at his Rocke Hall home. Experience the life, events and culture of the Powhatan Indian community of Arrohateck during the colonial first contact period around 1613. A demonstration of Revolutionary War history will take place on the bluff to commemorate the April raid by King's forces that destroyed the Virginia State Navy.

All tours taking place during special events at Henricus will explore nature and history related to the themed event.

It was AMAZING. First we did the boat tour and saw bald eagles and osprey while hearing all about the Powhatan Indians of Arrohateck as the English settled, skipped into whatever period of history as questions arose regarding the landscape we passed... Then we walked through the settlement and Indian exhibit... learning and also recognizing things we still use today-

HEY! Even those ospreys gotz themz some SOLAR PANELS!

Then we returned to the mid-century modern house.
Back to packing.
Wellllll, except for the hens, who were busy helping our garden...

I know this late entrance of the Ramshackle INefficient In-Town Farm House is confusing. But I've been in Deltaville my entire life; now, for generations. Pamplin and Deltaville have a lot in common- a strong community, where friendships often span generations. This here, is Deltaville: 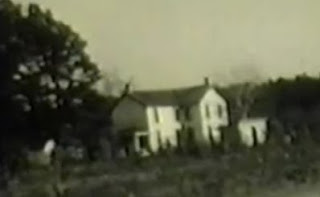 HOW DO YOU THINK WE BECAME PIRATES?!?
Deltaville.


After the tornado hit last year, I felt closer to Deltaville than ever.

[The tornado missed the Ramshackle In-Town Farm House by a mere fifty feet, by the way...]

With the Ramshackle In-Town Farm House we ensure that more generations will continue sailing, pirating and banditing.

Colors that influence me for the In-Town Ramshackle Farm House: I am inspired by decay, freshened.
Anthony Caprara (realtor design dude and good friend) and I discussed the following ideas:

Who does freshened decay better than Paris?
A collection of Parisian colors that work well with any Decrepit Dinge:
I like the light blue of this room next to white.
I love this picture! The blue in her dress, the Biedermier green that Anthony loves, the white... I just want to make sure colors are CRISP and FRESH but careful to not be powdery...

ORANGE and white! Anthony wants to do bright orange in the bath room, and after seeing its dingy beginning, I say YES, YES, YES!
Love the yellow.
...State-side, Williamsburg, of course, is well versed in Decrepit Dinge...
Colonial Williamsburg paint colors:

AND Latin America...
Don't forget Dorthy Draper, and The Greenbrier. Neither did Decrepit Dinge but certainly embrace fresh color.
Note the touches of light blue, coral & pink, and green... 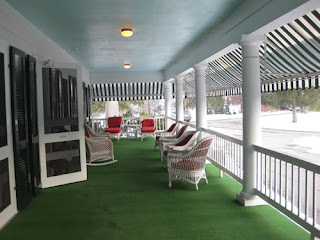 Always, with touches of coral and pink...
From earlier visits, some of my pictures:

Speaking of CORAL AND PINK!
Maybe we could do Pipsqueak #2's room in pink and coral! Then... came the wrench:
"MOMMA, I told you I want a Wildlife Room!!!!"
Pipsqueak #2 does not want pink. Or Williamsburg Blue, for that matter.
"I want WOLVES! I want DEER! I want to feel close to the land even when I'm not there."

Um, ok, how about a deer against, uh, Williamsburg Blue?
AND a wolf?

Meanwhile, I am roused from my Delusion of Grandeur:
WHO ARE WE KIDDING. This is our reality: 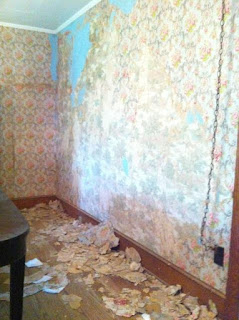 WHO WANTS TO COME VISIT????