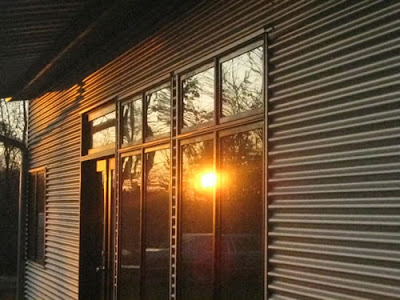 We are happy, back on the land, at our prefab modern home:
Off grid, passive solar, cozy in thermal sunbeams and cook stove warmth despite December's chill.

Here are some winter notes from the prefab house:


As composting toilet users, we have also become sawdust connoisseurs. We now understand intimately the advantages of our Amish neighbor, Mrs. E's fine, powdery pine-scented sawdust from their sawmill, over our loose, curly-q hickory sawdust from cutting felled trees. Over the year, we learned what worked, and what doesn't work. We enter the off grid prefab sniffing as we arrive, with trepidation, after each absence, and throughout the weekend... These days we smell the pine scent of sawdust during these sealed envelope winter months as we arrive (prior to turning on ERV / fresh air exchange)... Not bad.

Another thing about composting toilets is that, like your garden compost pile, they can only compost when they have warmth. We've been impressed that, still without radiant heat, the passive solar design of the prefab has allowed our composting toilet to function this long over winter because the temperatures indoors, thanks to the passive solar prefab, are still maintained for at least minimal composting.

So. Friday: It was rainy, it was muddy, the kids were cough-y, we were exhausted... it was a good excuse NOT to go out this weekend...

Handsome Husband shot me a caged look: "I've been in the city all week. I *must* go to the land." 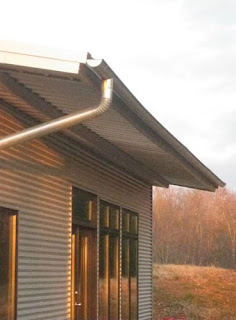 So we headed out Saturday morning, and as we neared, his breathing grew easier. We pulled up to neighbors, working, and that's how Handsome Husband learned how to string a fence.

It's not "you scratch my back I scratch yours" - there's a fine line: not calling chits, but people enjoying helping because help is always there for you, also. Helping is hard work but sociable, you learn from each other, work is easier when you have company...

We're also adjusting behaviors for deer season (during rifle- Nov. 19-Jan. 7th this year)- Maybe that is just the time to hunker down inside with kids coughing and spicy chili stewing and corn bread baking and let 'em do seasonal Movie Watching.

With those coughs, the early darkness, plummets in temperature, and deer season... it's time to bed down. Time to read, to simmer stews, to watch not one but TWO movies if it keeps you calm and recovering your health.

So, no big news on the off grid prefab house kit except that we cooked and crashed.
Well, we *did* drag out the solar pipe insulation which Handsome Husband installed [which took forever to arrive (got lost, we were remiss on being on top of it, refound, slowly made its way here..)].

Lawz knows we will be flying' around the rest of the year, restless! So... rest.
Rest is hard to get used to. But if you regard it as seasonal, it allows you to draw strength, so you can run, run, run through spring, summer, fall.

Handsome Husband is already changing DC->RVA commuter behavior.
After years of commuting by train, rail goers were surprised by a new tactic employed by a Nordic-accented man recently: As the train slows into the station, he has not only already lined up to disembark, minutes ago, but takes it a step further: As he lands, he starts sprinting to his car across the dark, sleepy Richmond parking lot to be the first one to pull up to the parking booth, pay, and race his way home.

Weeks later, there are now 4-8 sprinters, and a pack of slow-joggers all in the dark, running, stumbling, bumbling to their cars.

This week a voice, bewildered, joining the slow jogging crowd, called out:
"I did not know this was an Olympic event!"
Nevertheless, they jog.


Sunday the children sloshed about the icy mud of the Future Natural Pool, barefoot, until I caught them doing so. 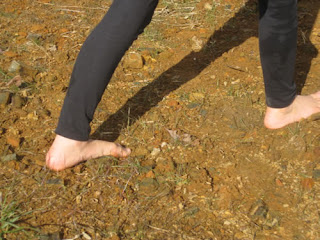 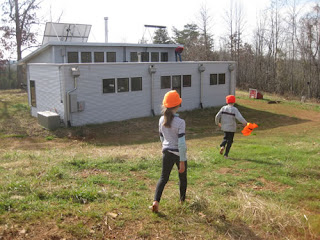 In unison, they suddenly realized, "We are FRICKIN' FREEZING!!!!!"

Come inside, childrenz, and warm yourself by the cookstove.
I can't *wait* until solar hot water, thus radiant heat in the slab, is installed! That will warm yer bare feet up...

We checked on the rainwater cistern.
Initially filled back in July, almost six months later it was full, all the way to the overflow.

If we're very, very careful, and remain extremely water-conscious, we might just be able to be here full time on that 1,800 gallon cistern, comfortably.

Shouldn't we all be sparing and frugal with water? 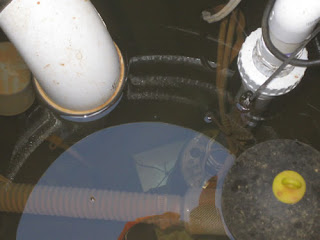 Here's some things that were on my mind this week:

I don't understand why this isn't front page news.
Virginia teen escapes al-Qaida-linked miltants in Phillippines
Check out where he's from - Campbell County, a rural area of Virginia that neighbors our own county on the land.

I dedicate this song to Kevin Lunsmann.

Welcome back to Virginia, honey.

And here's a topic we have been speaking about, much, in our household and blog:
The Book of Jobs
'Bringing the economy back to “where it was” does nothing to address the underlying problems.' 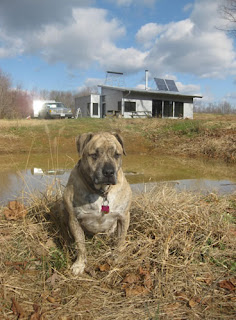 "Forget monetary policy. Re-examining the cause of the Great Depression—the revolution in agriculture that threw millions out of work—the author argues that the U.S. is now facing and must manage a similar shift in the “real” economy, from industry to service, or risk a tragic replay of 80 years ago."

Speaking of business, sometimes I struggle with my professional, modern, sleek architecture brand, and my "This is Copeland, talking" voice here. From the beginning, on this blog, I had to separate out the product from the many, many, meandering, rambling, off topic, diverging into here-and-there things y'all have to endure week after week just to get your nugget of green building. (Sorry)

I just *can't* not do that. I've decided this is my blog so yes it shows my prefab house kit product but really it's chronicling our family, so our children can remember this off grid journey, better, years down the road.
I hope you understand.

So when I saw something Elvis Costello doing what he believed was the right song to play on Saturday Night Live not what he was *expected* to play... I applauded.


As I applauded his return.

Elvis Costello and The Beastie Boys - Radio Radio by anchelito

I propose that in the end, it can all work out.

And, music: Ever since I discovered The Asylum Street Spankers thanks to their lovely song about leaf blowers awhile back, I have been enjoying their myriad musical offerings.


Enjoy that music as we keep cozy 'round the cookstove. 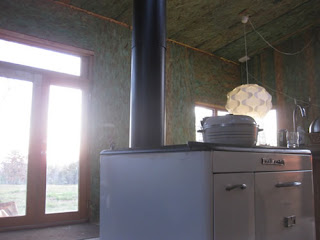 As we listened to music, read, and snuggled up together in the passive solar prefab, I made: 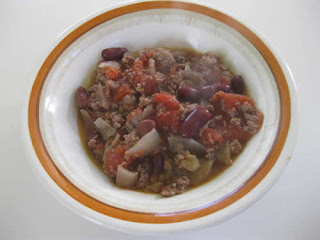 Copeland's Cinnamon Chili With Thoughts Of Her Iranian/ Parisian/ New York/ DC Friend Daniel This is chili for a crowd. Daniel taught this southern girl that cinnamon is not just for sweets.

Easy cook stove cooking: cornbread and stews... it gets you through the winter.

Back to Urban Chickens! (I'm just going all over the place today, aren't I?)
Once we move to the off grid prefab house I can have as many hens as I want. But that doesn't mean I'll leave my Richmond community stranded in the UNsustainable Desert that encompasses Richmond's thinking. Here's a few links I rounded up this week for the urban hen enthusiasts:
If you do happen to be stuck in Richmond, still, there's help:
ChiknEGG is offering a course on Hens 101 this January. Whether you're a master gardener or a backyard enthusiast, she's got something for you to learn.

Since we're speaking of hens: One of life's big mysteries: For those of y'all who have ever wondered how chicken wire is made: This is mesmerizing. Pull out yer yoga mat and gitcher zen fix, here:


Zen, interruped:
...Interesting. I *think* we just had a first S-e*x Talk with our childrenz... and it was all over... dirt.
I, exasperated, cleaning as usual, looking at alllllllll the fresh muddy paws and feet on the concrete slab, accusingly:
"Wow, we could sweep and sweep in this house, and yet I never stop cleaning up all the dirt! Dirt tends to propagate in this household with all of y'all, no?"
Pipsqueak 1: "The dirt breeds! There's about thirty dirt men making eyes at thirty, pretty dirt girls right now! And they're talkin' Dirt Children! Hahahahahahahaha! Their family name is Mr. and Mrs. Clay, and their new baby is called a CLAYborn! Hahahahaha!!!!"
Um... [Wha?]

In the meantime, this week I wish you all a warm holiday, safe travels, with lots of rest and respite.

Leaving the land, we paused at dusk to watch the lights in Pamplin City emerge. 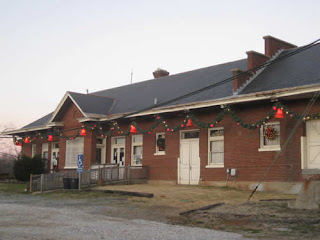 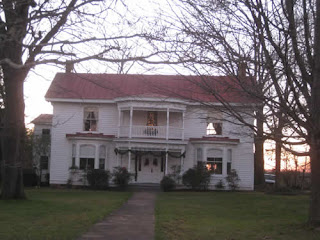 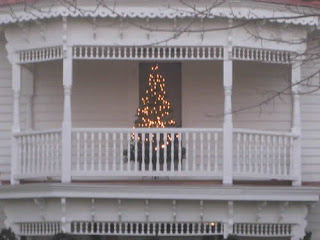 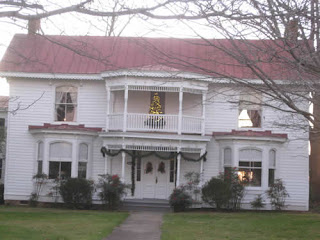 Thanks to whomever saw us gazing at the white house and flicked on the lights.
Our children, as each mile progressed away, are already homesick.