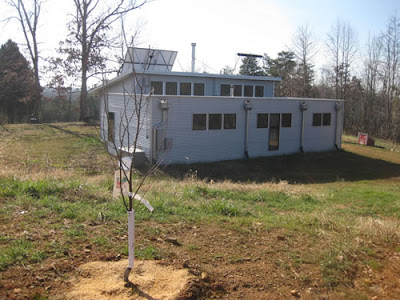 At the passive solar prefab, not much is happening in terms of off grid systems.

Completely our fault, we have fallen behind on septic and solar hot water installation as Handsome Husband finishes his first weeks in his new D.C. job. We're excited about D.C.; Ohhhhh, but our hearts are here.

So this weekend, we are dragging more stuff out from Richmond to the land.

I know, I know, don't get me started on stuff.
I admit I was quite surprised, when packing, to finally face just how many collections of mid-century vintage china I have collected over the years. 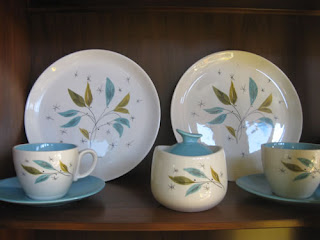 It's not that I ever intended to be a Vintage China Whore.

Just as I never intended to be a Vintage Coat Whore.

But when it comes to reuse, recycling, appreciating and preserving found objects, well, I'm a kinda a ho for reusing and preserving coolio stuff. Great design, discarded, then found before it was smashed, and hence preserved, is something to cherish and appreciate! Yes, I'm guilty.
I'm going to blame it on my background in supporting preservation with the HRF & APVA. See, totally altruistic, ha.

When I find these gems, sitting unappreciated in some random, far flung thrift shop for $2, I think, "Don't they know that's Arabia?!? How did it come all the way from Finland to sadly end up here?!? I must save this coat / china / funky lamp and give it a loving home in a family that appreciates it!"

We also moved our beloved, notorious Urban Coop here this weekend... you know, from the neighborhood / unsustainable city that took our hens away...

That, like everything dear to our hearts we drag out to the prefab house, solidifies the fact that this is our home. The children can't understand why we're not "home" yet. Here, for them, has for forever been home. Even before we had the prefab house. A look back:
While the ground is still not frozen, each week as we can we plant, plant, plant more fruit trees, berries, and even, this weekend, a camellia to help conceal the battery bank from view, while providing me with fresh flowers in winter. 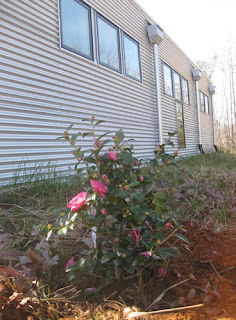 We saw the first sprigs of walking onions coming up! So excited for this hardy perennial to be already taking root. 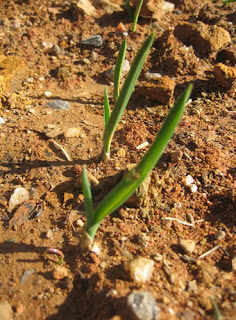 On the car ride out, we had some provocative conversations regarding the United States economy...
Here's what Handsome Husband said:


"The US economy has grown over the last decade because private households were able to increase their spending by getting more and more into debt. The housing boom allowed people to borrow against imaginary increases in values of their homes - and spend. Everyone says that the majority of the US economy is fueled by private consumption. Foreign investors have not only bought this private debt as a 'secure' investment but have also bought US government debt for the same reason, making it cheap for both the government and private households to borrow. None of this is news but I began thinking about the German economy: How can Germany afford its much more expensive social services and still carry a low deficit AND significant growth of GDP? My suspicion is simple: The German economy is based on the success of its products in export markets, creating a trade surplus (taking more money in than spending on imports) i.e. PROFITS increase capital in German markets rather than DEBT. Food for thought."

Here's some links you might find interesting:
Ironically, in finding y'all the link to The Story Of Stuff, above, I saw they've just come out with another movie, that ties into our car ride conversation.


And here's a critique:

Both sides have points with which I agree and disagree. What do *you* think? 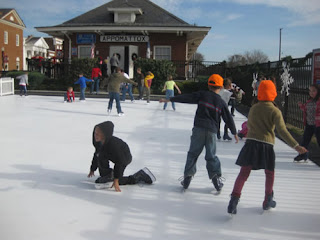 We headed in to Appomattox for the Christmas Parade with ice skating, carriage rides, and great local music and businesses to explore. Here, the community is still a majority of local business, full of old friendships, while welcoming newcomers.  In Appomattox, Pamplin, Charlotte Courthouse... the region is full of creative and business talent, with many families earning multiple sources of income, while also always planting food gardens so they're not so dependent on just "a job." Our neighbors are a good example: a family with an electrician career who also has a horse lesson / trail riding business while now building cabins for tourists to enjoy their farm on the weekends, while growing their own food and raising their own meat.

When electrician work is scarce, they still have multiple sources of income. When work is plentiful, they take the profit to expand their farm's functionality, like digging the pond / building cabins.

Towns like these might be, again, the future of the United States, not un-sustainable Suburban Anywhere, USA. 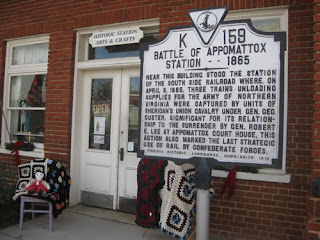 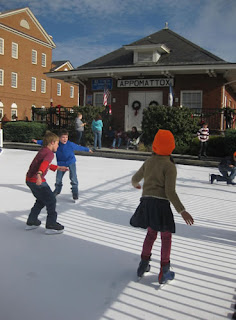 The childrenz loved the rink. You should have seen it- a rink full o' kids, wiping out. "Aaaaaa!" (bam!) "Oooooo!" (splat!) But I assure you, it was the highlight of each (runover, crying) child's memory. And when their parents said, "Ok, you've clearly had enough, poor thing!" they wailed, "Nooooooooooo!!!! I wanna skate!"

Here's Shakygrass. Can she sing or what?

Even Elvis paid a visit! Who IS this kooky awesome kid?!?


The music in south central Virginia is amazing. And the teens amaze me- in medium-sized cities, morphed with suburbia, teens have a totally different, non-centered outlook. Here, the kids are... it's hard to describe: centered, embracing  themselves with all their quirks, confident. They will do well in the world.

We wanted, as every year, to stay for the actual parade and lighting of the windows... but sadly had to return by dusk back to Richmond. Next year, we'll stay to the end. 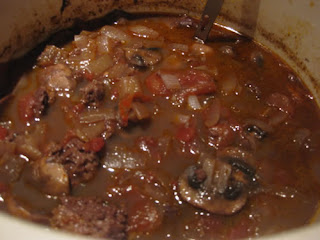 The red wine cooks down a bit, don't forget, after you've cooked it a few hours...
At the end, you can add it as a sauce over angel hair pasta and sprinkle with lots of parmesan if you like, or just serve it on its own. Make sure you break up all the venison into smaller bits once it cooks.

P.s. Here's another article for my Non-Existent Book Club In The Ether:
Class warfare: Should the rich be condemned?
No, but everyone, regardless of income, needs to live by the same rules, taxes, laws... and many do not.
This article does not take into account that if you create environmental pollution by creating businesses that just take resources / pollute their community like the steel factories that makes someone rich while exploiting the earth, then their money needs to restore and prevent it from ever happening again.

And, Zoning At 85: Is Zoning Still Necessary? (A must-read article!)

And for parents with children begging for a cell phone, Hang Up Those Cellphone Pleas (great points!)


"If you haven't established a college fund for the child, then the kid shouldn't have a cellphone. Don't allow your child to talk and text away money that could help pay for tuition, or at the very least buy textbooks."