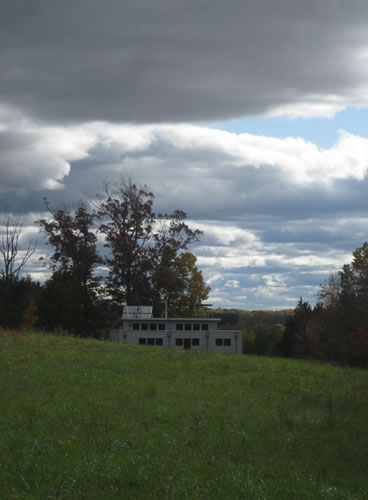 It was rainy. It was cold. Instead of running from the weather, we packed up our visiting guest from Germany and hightailed it to the passive solar prefab! Because even without radiant solar heat, through the passive solar design and energy efficient SIP, it was warm and comfortable when we arrived!


Even on a rainy day, the prefab's natural daylighting made it easy to pore over magazines and play board games... a relaxing day with, for once, no chores, nothing to do but play music and read.

Eventually the rain ceased, the sun broke out, and a gorgeous autumn weekend emerged in Virginia. 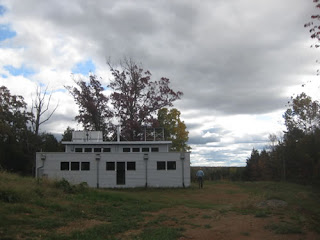 At the passive solar, off grid prefab house, we are thinking about how far we can go by Doing More, With Less. So is Germany.


"So far, so good, though the real test will come this winter.
I am by no means a fan of nuclear power, but the decision by the German government to switch off that many nuclear power plants at once may have been ill advised. They should have been phased out gradually, as more and more electricity from regenerative resources becomes available."

But sometimes fast change like this makes people realize they can DO WITH LESS, and maybe just need to get over that initial austere hurtle.
I say: Use it as an opportunity to question, rethink everything. (Although I can only picture the many Germans in their 60s loudly complaining... heck, they rise up in offended distaste over apartment clothes lines and having offspring, ha.)

When I'm in the off grid prefab house, I think,
"Well, I have an 1,800 gallon cistern. I know it's full, yet... I am the Queen Of 1" Baths. I have half of the double sink in the kitchen which I use as rinse water for dish soaking, for rinsing... I treat water like... Like you only have 1,800 gallons and it may not rain for months."

Well, it's been raining aplenty here. BUT: Rain is not a known variable. If everyone treated water preciously in Virginia, how many reservoirs would we still need? Same thing with power.

However, for ourselves, in the mid-century modern ranch house in Richmond, it has been Christmas for WEEKS.

If you live here, you might have seen us *frantically* decorating the mid-century modern house for Christmas a few weeks ago...
Yes, Christmas...

Even as I started preparing for our "Camping Weekend" at the off grid prefab house kit at the beginning of October, because someone's child wanted a Camping Birthday Party (that ended up being a Pack Everyone Into The Prefab For A Slumber Party), locating tents and gathering ingredients to make camping food for 25ish people... I was notified by Richmond Magazine's R Home that they wanted to shoot our mid-century house the following Tuesday... 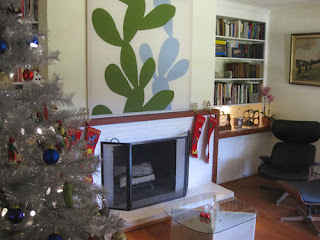 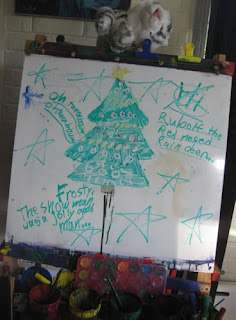 I wondered if the art director would approve our traditional family ornaments:  recycled, emptied PBR cans.
(Where, around September, we jokingly start serving PBR to our guests and collecting "ornaments"...)
They didn't, ha. That's ok:
OUR LIVERS ARE SAVED!

Because, you know, IN PHOTOSHOOT LAND, it's frickin' Christmas.

(Did I mention we're now on Week 3 of Incessant Christmas Carols Played By Mechanical Teddy Bears?
Ohhhhhhh yes, we are.)


Frost arrives...
With Halloween fast on our heels, our Neighbors Who Took Our Hens, Catherine Vanderspiegel and Glen Vanderspiegel, have suddenly taken to exaggeratedly waving and loudly calling out to us as we approach our car on the street.

I shake my head. I'm sorry, but: Do these Cultureless People not understand that... You can't take FOOD from a FAMILY and still consider yourself a NEIGHBOR?

After the last interaction, where the Perfectly Freeze-dried Hairdoo of Miz Smug And Mighty tilted, almost cracking her bubblegum pink lipstick while she bleated loudly,
"Hellllllllo, COPELAAAAAAND..." I started to slide. It's freakin' almost Hallows Eve: My dark side emerges.

[Seriously. You take away our hens from our family, from our children, just because you think they're uncultured. What do you think we of Hamburg, Paris, New York and Pamplin Cit-tay think of you?]
My old punk rock self began stirring in my breast, and I started lowering myself to them.

I envisioned egging them, toilet paper rolling their trees, using my laser beam-shooting eyes to start a concentrated fire on Catherine Vanderspiegel's immovable helmet-head of hair.

This was way better:
To all those who think urban chicken keepers are uncouth: 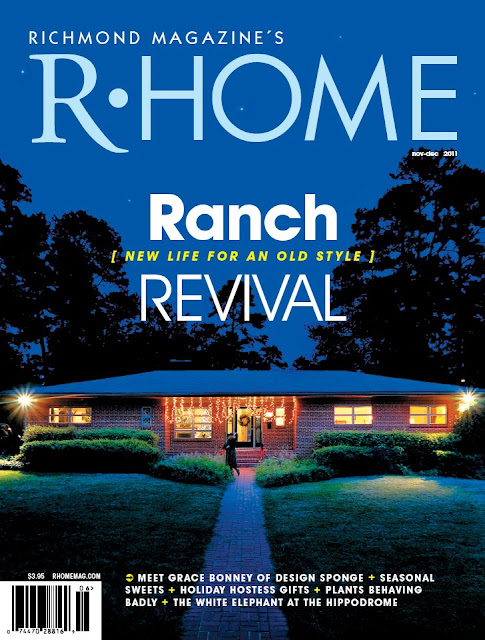 Yes, that is I, waving gaily at the UNCULTURED WASTEFUL PESTICIDE-LOVIN' COSTCO-GORGING YARD-WATERING-DURING-RAINSTORMS SLOBS that are my "neighbors."

They freaking took our hens. Who does that?!?
#IgnorantRubesYo,IgnorantRubes.
#OkNowI'mGoingToHellNextButAtLeastIDidn'tBurnTheOldLady'sHelmutHairOff

I would like to point out that the fronds in front of me gaily waving, inviting y'all in for a cup of hot cocoa on a, er, "snowy holiday night" (?) are my bed of parsnips. I love my parsnip bed. This is an example of how you can attractively food garden while enhancing your urban sustainability while looking architecturally cool. Cool enough to be on the cover of a magazine, in fact.

It's A New Era, Richmond Rubes. Move over and die out. 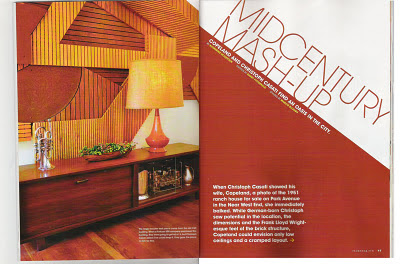 Here's some pictures I took on the day of the photoshoot, below.  The photographer, Barry Fitzgerald, and the entire R Home team did an AMAZING job.  I wish my house really looked like that all the time, instead of the dog hair and children's clothes strewn throughout you'd ordinarily encounter.  Barry Fitzgerald is an *amazing* photographer, the R Home photos much better than my dinky photos below!

Here's my messy scanning of our part of the article for those of you that are faraway friends, but of course it doesn't do the article (or pictures) justice vs. the real, colorful, full sized, in-print version, so go get it, 'K?

And guess what, UNsustainable Richmond Rubes? Not only are your neighbors gathering and banding together to stand up for the right to sustainability... Politicians are taking note, and publicly standing up too.

To finish the weekend?

The Best Ever Halloween Party, thrown by a friend who has the most amaaaaazing mid-century-ish modern house EVAH (check out the carp pool you have to cross to get to the entrance), who, although HER offspring is grown & gone, remembers how hard it is for People Like Ourselves to find sitters.

So she grabs a caterer who pulls off The Most Amazing-Yet-Scary Spread, throws down a banquet table with straw bales as seats for The Children's Table along her long, gorgeous hallway, strews her normally IMMACULATE MODERN HOME with straw, blood, eyeball cupcakes, zombie parts and guts... kidnaps the Most Amazing Unknown Band From The Eastern Shore Ever, and...


P.s. BIG congrats to our Richmond Green Drinks friends Julie & Paul Weissend's Dovetail Construction, whose headquarters has earned "...the nation's first building that has three distinctions: It is on the National Register of Historic Places; it has a LEED Platinum certification, the highest possible rating by the U.S. Green Building Council; and it is a "net energy zero" building that produces more energy than it uses."