Reader Warning: If my philosophical musings that tend to swell into a rant tire you, skip this post!
I promise to post on solar fencing and solar freezers for the off grid prefab later this week!

It rained three days straight!
So on Friday, looking at the downpour, we decided: No muddy-pawed visit to the passive solar prefab house! Until the home site has better coverage, it is just not worth all the work to bring children and dogs onto a clay mud filled job site to then pair those dirty creatures with clean sheets and mid-century furniture we'd *like* to keep preserved.

So we stayed in Richmond, the skies cleared, and we headed to...

I looked around at all these wonderful people from all over and thought, "I don't know any of these people! THIS IS SUPER!!!!! I LOVE THIS!!!! Go, RICHMOND!!!!!!"

And then... the first thing I saw when I returned home and opened my computer, all giddy after such a beautiful day, a lovely afternoon where I rethought my recent hard stance on Richmond...
was...
this:
No.
Not again.
Really. Let's review this:
Sooooooooo. It's "ok" to run your weed whacker and lawn mower for HOURS, and hours, weekly, and it's "ok" to water your lawn (ch-ch-ch-ch...) in the dark before dawn with potable water while it rains (which my neighbors DO, all the time), it's "ok" to spray pesticides that drift into your neighbor's (food) lawn, with no apology needed much less your neighbor's permission, yet...

You might hear a hen cluck and Lawz A-Mighty Call The Army.

Congratulations, Richmond. YOU ARE THE MOST UNSUSTAINABLE CITY I KNOW OF.
So. It's "OK" to have all these cultures at your frickin' FOLK FESTIVAL but here's the reality:
YOU WON'T SUPPORT THEIR CULTURES LIVING HERE, you don't. Face it: These "fascinating" cultures would be unwelcome in your daily life, Richmond. Oh, PR people, don't point me towards your chambers of commerce and societies for XYZ culture. Because you KNOW that if you asked those same cultural groups you celebrate at the Folk Festival on their stance on chickens... they'd support me, you rubes, and you, Richmond, do not support this basic food right, hence, you do NOT support them, nor I, nor many, many of your citizens.
UNsustainable Richmond.


Heck, in quite a few places in Richmond, you even outlaw food gardens.


The sun-kissed happiness of a beautiful day drained out of me, and I bitterly thought,
"Same ole, same ole RICHMOND. You average, awkward girl."

You offend me, you Boring, Unsustainable, Unlivable, Unattractive, I can't even call you a BITCH because you're too bland, with too low intelligence and therefore not worth the fun of the venom I'd ordinarily launch towards a worthy adversary, you insipid bureaucrat, you.

You city of faceless neighbors, who report hens "just because Richmond shouldn't have chickens."

*YOU,*  RICHMOND, TAKE HENS FROM FAMILIES, many of them JOBLESS, trying to better themselves, to teach their children, connect them to nature, raise them knowing more about their food and where it comes from and how important it is to treat that cycle well. Blech. We've all had teachers like you... You slow-witted relic, limping towards retirement. 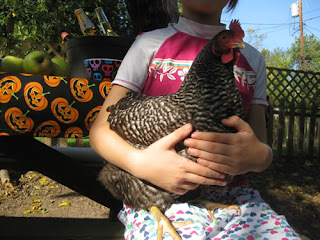 It probably took ONE COMPLAINT to some hairsprayed, awkward, perfectly lipsticked official for them to convene and agree, only a few years ago: "We don't want to look like some country bumpkins, do we? We want Richmond to look progressive so let's ban livestock!"

A VERY FEW complaints our officials stubbornly point out, when asked, when OVER SEVEN HUNDRED OF THEIR CONSTITUENTS ASK FOR THIS BASIC FOOD RIGHT (Oh you've seen our data, I'm the only one that's collected it and we're talking out of 55,000 calls, 100ish can be attributed to *any bird.* So there is something deeply ignorant going on.). 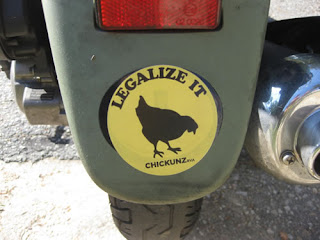 Handsome Husband-From-Germany and I spoke about it further. "It's just like the bureaucrats in East Germany, or Russian Communism... that didn't look at the world around them... these outdated people just need to die out." But why is that ok to hold the REST of us back? Why penalize our children, and other families, because they don't frickin' study current events in their industry?!?


MAYBE, instead of just "Dealing With Richmond," as we have these past few years, MAYBE we should just cherry-pick and enjoy The Best Of Richmond and relocate nearby to a more sustainable, livable town until Richmond catches up.

MAYBE that's not a bad idea...


MAYBE we'd come in once or twice weekly, do some cool things, see friends and colleagues, get work stuff done, then return to the more sustainable environs...
I know I've been pointing out some missing livable & sustainable elements within my own hometown. But before you think I'm *totally* dissing Richmond, let me tell you about the Richmond people and businesses I admire: They did it ALL ON THEIR OWN (usually despite Richmond officials). The things I adore about Richmond - weren't created by Richmond officials or the Chamber of Commerce PR campaigns but by the people.
I love this commentary by our friend Andy Thornton of La Diff, but... he's not addressing the *obstacles* one must jump in order to make this happen with local officials.


Why does Richmond always need to "reinvent" itself? If it were truly organically creative, it would just... grow, flourish, be embraced, and embracing. It shouldn't have to be this hard, or require a constant PR campaign.
As Chris Dovi says, "They shoulda just stuck with the original branding campaign over 200 years ago, in Richmond's St. John's Church:
'GIVE ME LIBERTY OR GIVE ME DEATH!' "


“There are towns where culture hits you in the face and towns where you have to dig for it. There are towns where creativity feels at home and towns where those with the least bit of it are making plans to leave. Between the haves and have nots, Richmond constantly straddles the fence. The town is full of historical baggage and political barriers but also a stubborn people who are striving — successfully — to nurture all things progressive from art to music to craft and commerce. What Richmond needs is a media source that helps the diggers find what they’re looking for and the doers proud to call Richmond home. It needs to act as a symbol for where we are and where we’re heading. That source is RVA.” 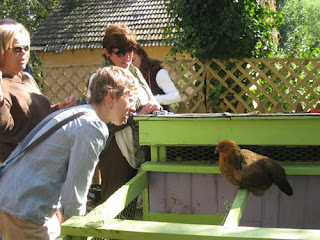 So, seriously: why does it always, always, ALWAYS have to be so difficult, Richmond?
My advice? Look at cities you consider "livable" - your competitors - and examine their code. They have many, many green spaces along the riverfront for biking, hiking... there is preservation *mixed* with modern design, and yes, they all have chickens.

Reflect on what urban planner extraordinaire Rachel Flynn had to say:
Here are the latest examples of Richmond citizens doing their own cool sustainable thing before local Rah-Rah RVA Official Cheerleaders ever even think of it. Can't wait to see these documentaries, much less EAT!

And yes, today's Richmond's 2nd Annual Coop Tour, successful DESPITE regional Richmond officials. (But I fully expect that in year five they'll be taking credit for it...)

Handsome Husband just made me laugh out loud: He said he wants to move me away and
"You sit pretty like that mermaid on a rock in Copenhagen."
Uh, NOT! #LovesAllHerBusinesses
Regardless, it's an adventure, and, for now, to determine year by year, a better place.


Why Not Rethink Things?
Often, practical choices may be more difficult. But... think of the reward!

One last thought: The video below makes me so, so sad. Apologies for his choice of words, but... he has some great points, and his frustration and rage are honest.

I don't think he's talking about one administration. I shared this with foreign and USA-friends-abroad today because I think there's something that universally taps into today's psyche within the United States (that resonates with Occupy Wall Street *and* the Tea Party)- in people's frustration with the irresponsibility of elected officials with their money. And in that vein, a recognition that we're the enablers. Maybe it's time for us all to realize that as much as we would *like* and *intend* to do X Y and Z, we don't have the funds for it. For now. Because that's what people do in Real Life. That's practical.


Maybe it's time for us all to insist upon the practical.

We've already lined up the 2012 Coop Tour Series.
Be excited, be grateful so many people recognize sustainability is important and a happy, community-building thing.