Remember The Rainbow Over The Prefab House Kit?

The closest way to explain this week is... It's like... Light bursting out of you. This blog speaks from my perspective, my prefab house kit companies, but don't forget there is a family.

For Handsome Husband, on Sunday he had some dark moments, professionally. Tuesday brightened. Wednesday upended. And then... And then people, people all over the world, CAME for him. We are EXCITED. I haven't been filled with this much happy readiness since that unexpected day when an offer arrived, and, with a week to move, I decided to move: To New Yawk Cit-tay. And there, made lifelong friends with professional opportunity.

It's like that moment when that rainbow appeared, out of nowhere a few weeks ago, and dramatically arced over the off grid prefab house kit: 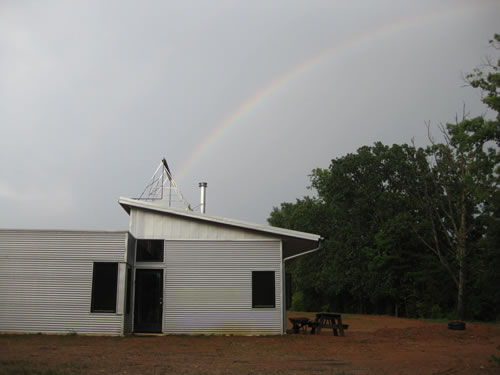 We opened ourselves up... and let it all go... and it was as if everything that has been holding us back these "having children years" was ripped apart, BEAMS of light hitting dark spaces everywhere, in every way, in every aspect of our lives. We don't just "have" to settle for this anymore. Suddenly our "Ten Year Plan To Build The Farm And Move There" became... immediately possible. While growing our business(es). While the excitement of other cities, somehow working it all together to... OUR satisfaction.

We go back... back to the land, to the soil, while curiously, intellectually moving forward, world wide.


Out Of Economic Chaos, A New Order May Be Rising

"Every week it seems there are more people looking for work, more companies laying people off, and more nations teetering at the edge of unrecoverable debt. But beyond the latest headlines of gloom, there is a fundamental shift going on in our economy and our world. Host Scott Simon talks with Mike Hawley, formerly of MIT's Media Lab, who says that shift may also hold great promise."


"Economic geeks tell a joke about Microsoft billionaire Bill Gates that goes a long way to explaining why so many cities face a budgetary crisis that can result in serious tears in the city’s social fabric while undermining its ability to invest in projects that beautify and restore the environment.

Gates was crossing a border point, the joke goes, when a customs officer pointed to his suitcase and asked if Gates had anything to declare. Gates said no."

We consider D.C., Warsaw, Lynchburg, Richmond, New York. But our hearts sing:
Take Me Down To Pamplin City Where The Grass Is Green And The Gurls Are Pretty / Oh Won't You / Take Me Ho-oooooooome

It's never goodbye to anyone we value. We'll be around, everywhere. But it's finally a Big Hello *BACK* to The World.

Remember The Real World, not this muddy, gray, this-is-a-good-decision-for-the-kids-place... here? Do you really care from where I type into the ether?
This sustainable journey is about to get much, much better.
After a few years toeing the line, we are ready to LIVE.

I start picturing the MAD yard sale I'll have. I mean, I am a lifelong Thrift Store gal. I will be unloading.
Picture:
The 1960s Hostess Gowns.
The mid-century china.
Shelves full of vintage cookbooks.
Think of the... furniture.

So this article, which I read over my morning coffee, disgusted me, as it was actually AIMED TOWARDS YARD SALES:
Unloading Stuff? Watch For Taxes.


"When you sell something at a loss, you can't claim a deduction. But if you realize a gain, you'll owe a capital-gains tax. The rate will vary, depending on the nature of the item and how long you have owned it."

Ok. I pay taxes on an item. The item increases in value. I sell it. I "get" (but not necessarily agree with) that the tax collector wants more money because I had good sense in a smart investment. But then, if I sell that same item at a lesser price, I should ALSO be able to take a deduction, no? If you're going to make me pay for its increase in value, then let's be fair and deduct for the decrease, no?

(Not to mention the topic of passing on our hard earned, taxes paid, items on to our children... That's what you call stewardship, people... That's sustainable.)


Just one more thing to make you go, "Hmmmmmmm..."

Get More: C+C Music Factory, Music, More Music Videos
I was thinking about how strange the ways of government can be, where an article in a national journal during a depression would be writing about what average people OWE THEM when people have yard sales when I saw this:

I mean, I honestly don't quite know or understand what the Wall Street Protests are about and it looks like even the protesters don't either. Overall I think it has something to do with people incensed over things like Warren Buffet paying less taxes than his secretary. Incensed over all the loopholes "Wall Street" seems to repeatedly "get away with" when people are suffering, when you have articles like today's aforementioned Wall Street Journal article lecturing People Like Us about Giving Government More Money for our freakin' Craigslist sales.

People get miffed, the things they read don't seem practical, fair or make sense, and so they march.

From OccupyWallSt.org:
"Hundreds of demonstrators gathered near Wall Street in New York City to protest against the existing financial system, which they say is the cause of the economic crisis and is fueling social injustice."

What did Wall Street do? Mock them from balconies while sipping champagne.
[Make sure you read that call to mock... I'm all about washing hippies but to scornfully douse them with your champagne dangerously puts you close to famously pursed, delicate lips recklessly uttering "Let Them Eat Cake."]

In the meantime? We face the storm.

You might even find us dancing in the rain. Stay tuned.