On the Chesapeake Bay, we felt the earthquake, yes, but were already focusing more on Hurricane Irene.

By Thursday we felt we'd better head inland, stop in Richmond to check on any mid-century house earthquake damage (one picture fell off a wall, that was it) and gather anything else we needed (I had packed for the Chesapeake Bay *and* Appomattox this weekend, in the case Hurricane Irene became a quick Category 4).

We repacked the car slightly, loaded in the children and dawgs back in and hightailed it to the off grid prefab SIP house at, appropriately named: Higher Ground. 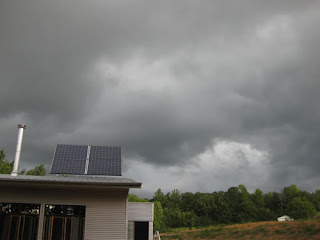 Just in time to experience an ominous thunderstorm with... slowly... twisting... clouds.

We unpacked: "Y'all watch those clouds, childrenz; if you see a funnel let me know!"
Sheesh. JUST WHAT I NEED, a possible twister comin' across the field after all this?!?

The storm passed.
The sun came out.
It was lovely.
The passive solar prefab again showed how strong and solid and steady she is.
When I talk about using a marine approach to small footprint living, it is more than that - our passive solar, energy efficient, prefab made with sturdy SIP is both our port, our vessel, our safe harbor, our boat.

We continued to ready for the hurricane.
Handsome Husband finished burying the cistern. 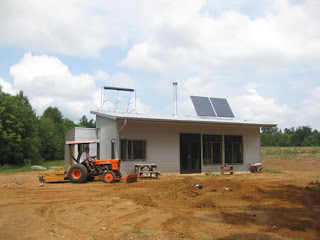 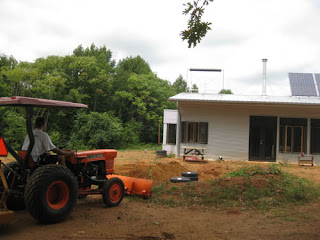 We did laundry, so we'd have plenty of clean sheets for guests. 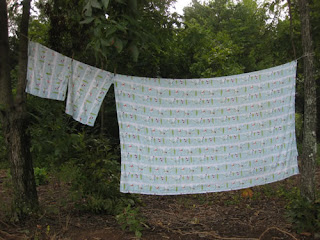 We pulled the second bunk bed frame out of the shed to put together for the middle bedroom and carefully planned so that TEN people could all sleep in real beds before we even had to pull out an air mattress! And we have two double mattresses, ready to pump up! While at the Bay, I made big amounts of food to bring to the prefab so we'd already have some things ready. Come out! Come out! 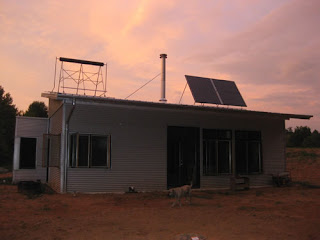 We even emptied the composting toilet.

And then? I tried for *days* to get our Virginia Beach, Chesapeake Bay, and Richmond friends and family to come.  It's like... no one took Irene seriously, or thought she would really be that big. By Friday I was *begging.* They began to evacuate New York City (note: days in advance vs. anything Virginia was doing), and I told my New York City friends and family to catch the train to Lynchburg and I'd pick them up at the station. "We could always buy more air mattresses and supplies in Appomattox, just please do come!" 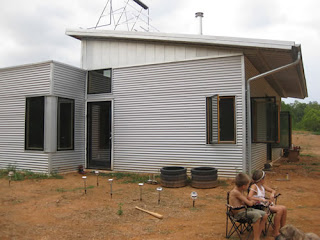 From The New York Times:


"With an estimated 55 million people in the path of a storm the size of California, the East Coast’s major cities were preparing for the worst. Hurricane watches were posted and states of emergency declared for North Carolina, Virginia, Maryland, Delaware, Pennsylvania, New Jersey, New York and New England. Amtrak canceled train service for the weekend, and airlines began canceling flights, urging travelers to stay home.

For the first time in its history, New York City planned to shut down its entire mass transit and subway system — the world’s largest — beginning at noon on Saturday. At least 370,000 people in the city were ordered evacuated from low-lying areas. New Jersey Transit was set to suspend service then as well."
...
“'All of us have to take this storm seriously,' said President Obama, who cut short his family vacation on Martha’s Vineyard, Mass., to head back to Washington on Friday. 'All indications,' he said, 'point to this being a historic hurricane.'" 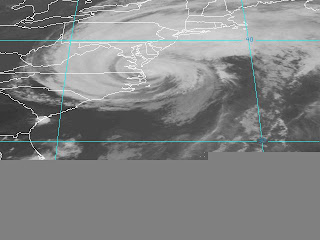 If you think, sitting in an off grid, secure and strong prefab SIP house, fully stocked with water and solar power and surrounded by farms and food and local friends I would be happy...
I have never been more miserable in my life.


The winds whip here and I can see, via the internet, what it's doing to the shore.
We have a 93 year old family friend who lives a block from the oceanfront in Virginia Beach who refused to be picked up. Our dear friends and family are in Deltaville - some family even on boats.  And my parents, sister & her family, and most of our friends are in Richmond.  There is nothing more we can do but wait it out and hope everyone is ok.

Saturday dawned and a steady gusty wind blew. By eight, the rain began.
The grading done around the prefab home is working *great.* It is carefully channeling the water far away from the house kit and gently down the hill, avoiding the "future natural pool" to wind its way to the Future Orchard.

By 5pm after a day of torrential rain and wind, there is not a leak, a breeze, nothing within the prefab home but cozy, strong comfort while we watch the trees wave and bend and listen to the rain hit the roof, steady, driving, yet... somehow pleasant.

It reminds me of when we did the energy audit / blower door tests on the energy efficient SIP house; except it's OUTSIDE that's a-blowin', at hurricane levels. Inside the prefab?
Immaculately still.

Hurricane Irene just touched land today in the U.S., but people have already died, many of those, preventable.  I would like to take a moment to give a shout out to WxRisk.com. Thanks to the information and discussions on David's WxRisk facebook page, I was able to look at data, evaluate data, put opinions and interpretations together to form my own judgments DAYS in advance.

I am put out with local Virginia weathermen to whom everyone I pleaded to evacuate listened: "Slight chance of rain..." I tried to convince loved ones to come here but when their tv is telling them it's a 30% chance of rain, as I am trying to get them prepared, begging them, warning them, to leave: Their tv says otherwise, until suddenly their trusted tv changes course at the last second, too late...?!?

Couldn't they at least say, "I don't think it will amount to much but do be aware there is a huge hurricane headed our way." [Wha?]

For all of our New York friends and family, stay safe... she's heading your way. 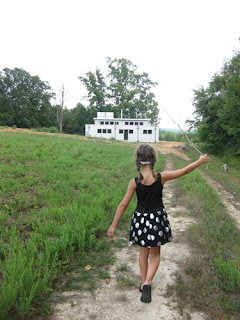 That is a fantastic home you have. Those solar panels are great too! Glad you took the necessary precautions and stayed safe.