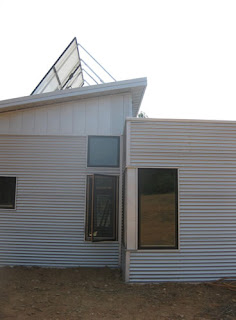 After, a neighbor rode their horse by The Land and called to tell us, "Your pond is filled!!!!"
But we don't *have* a pond.
[Unless you count the old breached pond in the woods... but...]
Ah, no, she's referring to our natural pool dug, but with no liner ordered yet... now filled.

Aw what the heck: Wooooo! That means the rainwater cistern's full too!

That "pond" being filled should be interesting...
We haven't lined it, haven't built the shelf around it, haven't planted the plants yet...
Accidents never happen, in a perfect world... right?

Sunday evening was unexpectedly busy.
Handsome Husband called as he returned from the land after plumbing  and I innocently requested...

"Please pick up some strawberries from the Berry Farm so we can make jam before the season is out..."
He lugged home strawberries, cucumbers, eggplant, beans...
#UnexpectedCanningDay


Then, weeding, we mistakenly dug up some potatoes, which we can leave in-ground a few weeks yet.

Here's how to keep them. Oh, and a few spring onions and garlic were pulled. #OnionJam

Friday I headed back to the Bay while Handsome Husband drove in the opposite direction to spend another weekend on The Land plumbing with Max.
I loosed the children to run wild with osprey feathers and honeysuckle threaded through their hair.

We went thriftin', and got some good deals. But, being a Pirate, I can never tell you where to find the treasure, I can just show you the bounty:
For The Little Girl's Dainty Mod Kitschy Room:
$2 needlepoint pictures someone lovingly and carefully created!!!! And (another) vintage pony to add to her collection of Kitschy Cool China Figurines (you'll see. It will be cool. I promise!). 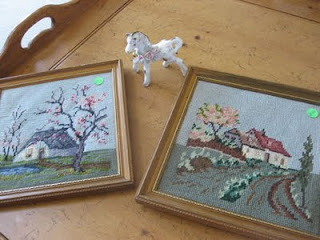 For The Little Boy's Cabin In A Woods Room:
A green gingham unfoldable seat that turns into a futon for friends- I think it will look nice tucked in that south-east nook / window under the vintage cuckoo clocks! The fabric will be a nice jolt to the otherwise cooler staid tones in that room. 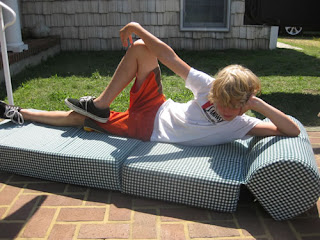 The 11 year old nephew also happily triumphed with the purchase of a LOUD ELECTRIC SYNTHESIZER KEYBOARD which I know his family will be *thrilled* with when he returns.
(Did I mention they just had a baby?) 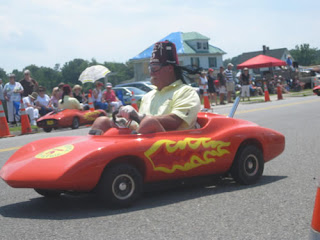 And then it was time for the Deltaville Heritage Day Parade.

We didn't really talk about it, but although y'all have followed my July 4ths always here, in the Bay village I have known since I was six years old, THIS was a year I would never miss, after this spring.

The tornado may have gone through the center of town, but here we were CELEBRATING barely over two months later. The wreckage and reminders are still so fresh, still here (and may we never forget), but... it was like Whoosville when the Grinch steals Christmas and yet a sound of singing rises as the community gathers around the tree...

We gathered, in Deltaville.


Except *our* Whoville song was a lil' different:

Shriners In Deltaville.
[A *very* special thanks to Richmond's ACCA Shriners for always being such a great part of the parade, and we are always so grateful for what you do for children. Being here this year... you have no idea how much we love you.]

I ended the evening sitting in a lawnchair with my daughter snuggled against me on my lap, the creek in front of us, while above, the baseball game fireworks shot into the sky... until, at the end of this video, the gun-shy dog tried to climb into *both* our laps...


At dawn, I took one look at the leaden sky, pictured ourselves with The Family allllll inside together while it rained, and knew: Time to go.

We packed hurriedly, headed towards Richmond, then, five minutes outside: Decided to keep on, keepin' on and headed to The Land. [I mean: HIGHER GROUND.]

We had no clean clothes, no Food Plan, nothing except what we had in our car.
It was fabulous. 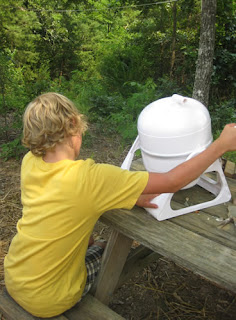 The children had a grand time trying out the new, improved Lehman's Wonder Washer ([it's fab. I *love* it. Every single design flaw I noted in the first incarnation is gone (there were only two and they addressed it) and I LOVE MY WONDER WASHER!!!!!]. We got our dirty clothes clean and hung 'em up to dry.

We *might* have fed them chips and hummus for dinner... but the Pipsqueaks and their Cousin didn't care - they were HAPPY.
The dogs were happy.
We were happy.

I know there were beautiful fireworks this weekend all across Virginia... but I have to say: gazing at the stars tonight from the prefab house, looking up above a dark field as the cicadas hummed while the heat lightning gently lit, rolled and faded across the sky was a gentle spectacular show in itself.

We sat up quietly with the children listening to the whippoorwill call and watched shooting stars fall from the great, star-filled sky they could still see from their cozy beds.

The next  day we headed to Holliday Lake where there were no jelly fish, no nit picking, and nothing to do but  relax and have fun jumping off of docks into the cool lake water...