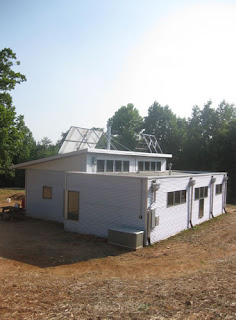 Still recovering from last weekend's hectic plumbing and cistern-fixin', our hard work was rewarded when we got an email from our guests saying how much fun they were having in the prefab modern home.  And from now on?
We have potable water.
Showers.
No more lugging in water cubes, hiding from social engagements because there was no bath for days...
We'll be presentable now!
[Is that as much fun? Hmmmmm.]

The rest of our summer will continue to have prefab green home construction projects, but nothing of the deadline and magnitude we experienced to achieve potable water.
From now on? NO STRESS.

So. Now without their visiting cousin to enthrall them, how to keep the children busy?
They picked elderberries for jelly.

I also learned you can eat the elderberry blossoms, like you would fry up squash blossoms. But I kinda imagine that's as practical as popping amarynth. Which I also have done.... once. And when I handed that popped amaranth, giggling, to the then-5-year-old, she was mighty disappointed.

The recipe for canning elderberries I used this time also has a touch of lemon (from Farm Journal's "Freezing And Canning Cookbook," 1963) and is described as "Something different and delicious to serve with game. Grandpa's delight." So, just like the onion jam I'll be making later, when you think of berry jams & jellies like elderberry, remember they're not only good with bread... but meat. 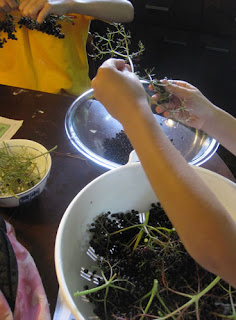 I also don't mind processing elderberries.
Think about it: NO ONE COMPLAINS when they spend a day in the hot sun dodging copperheads and chiggers for blackberries... yet elderberry is "difficult?" Honeychile, you've got it all wrong. Just snip the ends of the berry branches into a colander, stroll inside, and spend the same amount of time but in the cool prefab home sorting out your treasure.

My trick is that I have one hand hold the stems firmly, the other rolls the berries into my palm, which makes it easier to pick and sort before dropping perfect, sorted fruit into the bowl. It is much more difficult to try to sort and pick out stems once everything is in the bowl.

Copeland's Elderberry Jam, adapted from The Farm Journal:
Elderberries
Less than twice the amount of sugar as you have elderberries
(Why does every elderberry recipe have 2-6 times the sugar to berry? Can ya just enjoy tha' freakin' berry, folks?)
Dashes of lemon juice
1 pkg. fruit pectin (elderberries do need it to 'set')

Cook up the berries, sugar, juice, stirring constantly, as it boils then add the pectin. Skim off foam (I always forget to do that) and pour into hot jars, seal, can via water bath method 5ish minutes.

Inedible raw, elderberries cooked down are delicious and have more vitamin C and antioxidants than any other herb than rose hips and currants!
I'll be serving this elderberry jam with venison come fall.

Richmond urban chickens, and the fight nationally for this basic food right, continues, even as THE HAMPTONS legalized chickens this week.

At the Lightly On The Ground radio show, we got into data.

Here's more food for thought: (From Science Blogs)
"In ‘Reconsidering Cities,’ Sharon points out that it other parts of the world it's not so unusual for city dwellers to raise much of what they eat:

Hong Kong and , for example, both produce more than 20% of their meat and vegetables within the city limits. In 2002 with more than 6 million people, was producing 33% of their produce, 14% of the pigs, 36% of the chickens and 20% of the farmed fish eaten in the city limits, much the animals being raised on 160,000 tons annually of food waste that was recycled into meat and eggs."

(vs. Food waste going into the landfill!)

Shouldn’t this be part of our sustainable conversation and not just LEED certified buildings?
Give it time, folks... just consider it, turn it around in your heads, look at and seek data. That's all I ask of our officials. Give it [your] time.

NO ONE responded.... except Henrico.
Here's what Henrico county's animal control has to say on the number of animal complaints vs. chickens in the entire county:

"Just to give you an idea, as a unit we respond to over 21,000 animal related calls each year. Of those 21,000, about 5,000 are wildlife related and the rest are domestic animals or livestock.

I can safely say that we receive no more than maybe 150 or so calls in regards to chickens in a year’s time. "

If you live in a region that hasn't responded, ask yourself: Why it's ok that overwhelmingly there is no response from our officials when we ask them about this issue?

Ok, in case you didn't hear me the first time:
Hello, salaried employees that are supposed to be keeping up with your peers:
GIVE IT, CHICKUNZ, YOUR TIME.
Look at data. Sheesh. Who are you elected-officials-people that don't look at data?

Well... as I said, I'm still recovering. I'm so exhausted I wouldn't go on tv.
Amy Randolph did a great job as the "Provide The Data" chickunz gal on Channel 6 with ChiknEGG's Lisa Dearden talking about urban hens in HENrico and regional Richmond, and the upcoming Mad City Chickens movie coming to town.

I'm pushing through with deadlines (Shhhhh: did I tell you about the prefab cabin Dogtrot Mod yet in Pennsylvania? No, I have not. Announcements soon, once that project gets underway, and also... well, announcements very soon.)

In the meantime, I will survive.
[Someone cue the Peruvian drag queens... ok, thank yew!]
Slowly, I stomp back to the stage.

Thanks for the elderberry rolling hints - now I might try it again! Great memories of elderberry pie. But it must help to have children around for the picking.