Progress On The Zero Energy Off Grid Prefab House! And My Colleagues Wonder If I'll Join The Tea Party Until I Realize The Tea Party Is France 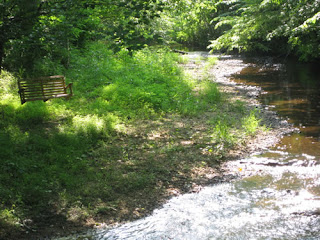 Our children were gone this weekend. You might assume we kicked back in the modern prefab home, and rested. On the way from dropping them off at 4-H, we discovered this swing, next to a creek, deep in the woods, along the park roadside in the middle of *nowhere.* Lovely!

But there was no time to sit and rest, even on a charming unexpected bench in the middle of the woods. We had work to do to continue our progress on the prefab house kit! 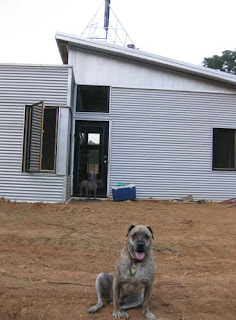 The children may have been whoopin' it up at 4-H Camp, but that meant we worked even *more* on the zero energy prefab home!


Plumbing continued with Max, with Handsome Husband assisting, and we did a seasonal emptying of an off grid system: the composting toilet. Then I spread not straw but moldy hay over the recent excavation / grading.
I *know* you're jealous...

It was nice to see the energy efficient passive solar home performing nicely in the heat. The overhang kept direct sun out, yet there was always plenty of light inside.

With the windows open overnight, at 7:30 a.m. it was 74 degrees as I closed the house back up. At 12, it was 79. Today the high was in the mid-90s. So, like in winter where we lose a degree an hour, this is consistent where we gain a degree an hour in summer, without any cooling systems, and always are about 15-20 degrees on the better side of the weather, still without systems and with just the passive solar design. 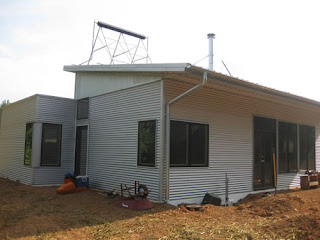 By the way: After my last post y'all thought I was going to go off and join the Tea Party, didn't you.
My colleagues did...
I skimmed the literature and  I get it:
The Tea Party? Yo, they're France!
Don't get me wrong. I love France!

Well, here's the (latest) on France. They have banned all on-air references to Facebook and Twitter because eet does not eeexeest in zer original French lan-guage, and is 'clandestine advertising' zut alors and honeychiles, y'all. 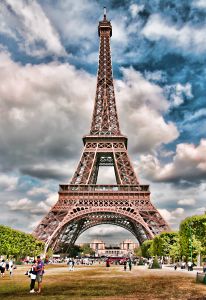 See, the Tea Party is like France in her "protection" of her original language and cee-veel-eez-zation. Language, community, and civilization are organic. They are all ever-changing, influenced, affected by l'argot (that means"slang" for y'all non-frenchie people, y'all...), inventions, new people... I do think we should always mind and reference the Founding Fathers because I do think they got the gist right but... imagine if you transported them here, today... would they really be like France? Entombed in maintaining original culture/outlook? Or would they say, "Cool, yo, I get it, let's move forward and discuss the world situation more my bruthas and sistahs...and put on some bluegrass while yer at it."
Who knows? I don't!

The Tea Party protects "the right to profit." Now I'm all about profit. But if we profit over every piece of land then... what will we have than cement? Whatever happened to being a steward? Isn't it time we look at land and nature as something we depend upon, for our existence, to treat carefully, even with reverence, as a resource we could ruin? I considered that as I toiled over two days seeding the newly-exposed top soil (oh so precious! Please don't blow or wash away! Our family depends upon you!) from the excavating and then spread hay over it again, to hopefully protect it. 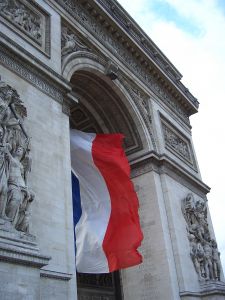 But using France as an analogy to condemn the right, also condemns the far left! From the Christian Science Monitor, the French liberals agree that mentioning Facebook and Twitter is unfair to lesser business models:


“Why give preference to Facebook, which is worth billions of dollars, when there are many other social networks that are struggling for recognition? This would be a distortion of competition," Christine Kelly, board member of the French Superior Audiovisual Council (CSA) that made the ruling. "If we allow Facebook and Twitter to be cited on air, it's opening a Pandora's Box – other social networks will complain to us saying, ‘why not us?'”

Well, girl, that's because the person was frickin' talking about Zee Facebook-ah or Zee Tweet-ter, not your undiscovered, uncreated, unremarkable entrepreneurs who are not Facebook or Twitter and I assure you when they start doing something interesting and newsworthy they will get air time! [Sheesh!]

Actually as we delve deeper into French politics we get a big ole Grève mess and...
Oh. Wait. Enough about the Tea Party being all French and all.
Let's talk about the off grid zero energy prefab house kit! 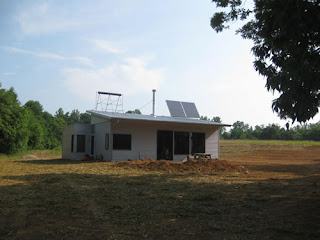 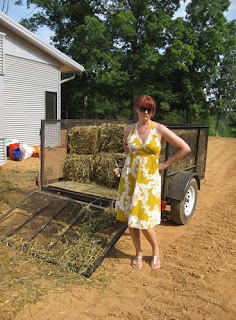 I sowed acres of graded soil with seed and moldy hay in silver Melissa flip flops and a vintage Hawaaian dress. Next time? I'll bring my overalls.

We couldn't find any straw locally, but Mrs. E, our Amish neighbor, did have hay, which had rained on it and was therefore no longer appropriate for their horses, to offer as straw for our newly-seeded home site / area. We were happy to purchase it, a great exchange between neighbors- they got money for not-great-rained-upon-now-moldy hay, which we used as straw and had the added bonus of seeds included that might sprout on top of what we seeded.

Clouds gathered, and we got busy.
I quickly strewed hay-now-used-as-straw, careful on my even-ness: enough to let light in yet heavy enough to prevent washing away of the soil...

Then: there was one moment where the wind *swept* down, and in a deliberate breath overturned and blew away an entire area I had just sowed.

My jaw dropped, then my cheeks flushed high, in shocked indignation at the now-bare soil: as if a suitor had roughly just flipped up the starched petticoat of a until-that-second encouraging beloved.
When lightening flashed we came in.
Immediately it began to pelt a steady rain, and thunder rolled across, heavy.

So I sit here, waiting for it to pass, with straw in places you've never seen a girl sport in a sunny, vintage Hawaiian dress... I have moldy hay up my nose and down my lungs, ugh.
Handsome Husband is thrilled with all the cool plumbing stuff he's learned from Max today.

Natural systems have been at work on this planet for ages. Many of the best technologies mimic nature and many of the worst technologies violate the natural order. Consider a meadow or a forest, providing food for all sorts of creatures, while sustaining a viable ecosystem by recycling nutrients and building soil. Now lets jump to an industrialized row crop operation, where the food is grown and exported far away, since we aren't recycling nutrients we must fertilize, since we grow a monoculture we must use pesticides, since we fill the soil with poisons the soil life suffers and eventually we deplete what life did exist there. Consider what a sustainable government that mimics nature might look like. Consider what an unsustainable government that mocks nature might look like. Which model would guarantee you the most freedom? Which model would seek to control you and everything you do? Which of those most closely represents our current government? Why do you think they keep us divided? Who works for whom? Would you recognize the truth if you saw/heard/read it? The Tea Party is NOT France! Bigger Government is not your friend! Globalization is not good!

Thank you so much for caring to write- I (tongue in cheek) made fun of Big Government and Much Less Government equally in that post.

After paying my dues on the money I earn, then realizing I can't just give that reduced dollar to my children without *them* paying something (is that sustainable? HOW are you supposed to pass on as stewards *anything* to the next generation to protect?) I admit I'm no fan of Big Government, that's why my colleagues were concerned I'd be off joining the Tea Party, ha.

I am all about pitching in as a community, a larger network, but where do you draw the line? Where *does* the larger network end? That's the balance we fight for in each election.

I like your analogy. What put me off in the Tea Party literature there was a part where they talked about land and that "farmers should have the right to sell to anyone to get their retirement money." Well, it sounds like a zoning issue to me: if you buy land in an agriculturally zoned area, why should you expect to sell to a developer, and can't we all just respect the land a bit? I'm all about selling a farm to another farmer, and at a profit.

I also was concerned at how focused on "the right to profit" the Tea Party is, when as a community we need to think as business owners:

The XYZ company, members of a small town, pollutes the entire bay by what they make. That hurts their crabbing and fishing business counterparts, and poisons the community as a whole. Is that their right to profit?

I think this is a discussion that all of us, on all arrows of spectrum on the political scale, find discussion in to participate together as a community to come up with some better balance, hopefully.