We were so thrilled to have David Day, architect of our casa ti prefab house kit, come out to the zero energy prefab today!!!!!

The first thing he remarked on was noting the indoor temperature - we had all arrived at the land at the same time, and, being March in Virginia, although blossoms were bursting, there was snow in the air. The weather outdoors ranged from the 40s to the 20s. But mid-morning, without heat, purely by energy efficiency and passive solar design, inside the prefab it was 60! A nice base to start with as we fired up the wood stove! 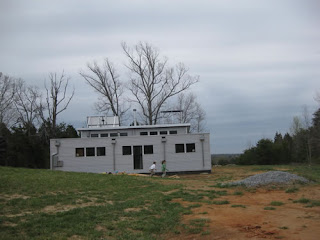 The children immediately took him for a walk in the woods to see the daffodils-planted-by-someone-a-hundred-years-ago by the creek. 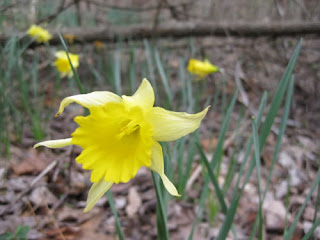 Then we meandered back, and cozy indoors again, he admired the VMI basketball court on the walls and checked over the off grid systems and their placement in context of our living spaces.

We had an opportunity to rethink the kitchen area... again.
The great thing about this construction project's slow finishing (just remember, the prefab house kit went up in a week! But we're finishing "pay-as-you-go" and on our own time...) is that we can make these final decisions after having really used the indoor space; so we can see what really works (the bedrooms, the south area in general) and what needs to be tweaked (our kitchen, our bathroom because of the systems we chose like the humongous composting toilet and claw foot tub, not the square footage).

The more I started picturing that kitchen island and thinking about the way we cook and entertain, the more I thought, "You know that idea of thermal mass around the kitchen island is a great idea, but with the radiant heat in the slab we really won't need it, I mean seriously on a cold day if our house without heat starts at 60 then... I would rather lean towards a more sleek and sharp, smaller and efficient look for that area!" I'd rather keep everything as airy as possible.

Another thing to note is that trash can.
We need nothing close to that big. It takes us *weeks* to fill that up, and even then it's discarded packaging that can't be recycled. The vegetable scraps go into the composting toilet, recycle all our beer cans, ha, so any sleek, small, discretely placed foot-pedal can will do. 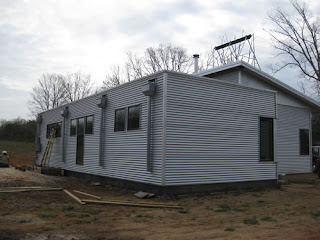 We also keep talking about thinking of our prefab house's off grid small footprint lifestyle as a boat. Everything needs to be as tight, efficient, perfectly & securely placed with storage storage storage everywhere, just like on the Beneteau. The systems guy might complain about installation in tight spaces for the few days it takes to do his job, but in the end we'll maximize the living space for a lifetime.

Accordingly, like on the boat, you'll see a lot of shelves that open up to reveal storage / systems space.

I'm going to roll that chest-freezer-turned-into-an-off-grid-refrigerator back into the wall near the water tanks. It will be close, but it will fit. That'll tighten up the island area.

We also spoke about taking VMI floorboards around this small window here - create a frame that also doubles as shelf / storage so it extends out as a box while still being clean, sharp, and an accent. 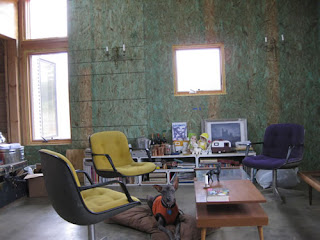 And, in discussing further finishing the interior of the SIP (structural insulated panels) where we are not covering already with reused VMI basketball court, we again weighed our options. And leaning towards an organic plastering like I had originally mentioned in our prefab construction cost & other posts:
(Which, yes, I do need to update those prefab construction costs... but again remember we're doing a whole lot of different off grid construction stuff than most people would do so I don't even know if it would be relevant to you!) 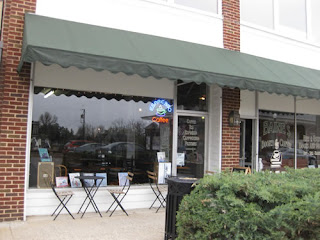 We hauled David up to Appomattox and to Baine's because we thought he'd like it (he did). In Baine's we met a British couple touring Civil War History, and working their way towards Manassas. Instead of sending them via the more bigger routes, I encouraged them to backtrack to Brookneal for founding father history at Red Hill, to end with a tasting at Sans Soucy, then head up through Amherst, working their way to Lexington. From there, if you follow 81, you can take all sorts of quick detours of neato things to see!

I tried to get David to go into the antique stores with me but he looked at me and shuddered. I pictured him amongst the transparent, rattling, dainty teacups and embroidered artifacts and laughed. But oh how I love to walk those aisles, never knowing what cool non-electric tool I might find... 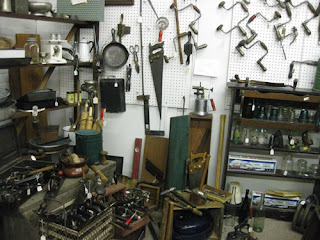 We thought we'd just go ahead and head back to Richmond because tonight? It's supposed to... snow?

When we arrived back to Richmond the house directly across the street from us was having a huge children's Birthday Party, still in full swing. We are not part of here. Our children silently helped unload the car then went into the front yard to stare. I keep waiting for them to be affected by this neighborhood but they're so full of happy creative optimism that it's a rather interesting science experiment living amongst these muddy eyed surburban souls... I worry a little for my children but...

...it rolls right off them and they giggle and play and race around with people from all worlds... I learned about all this and now they are too, just sooner than I expected... I think it's actually making it much easier for them. So, even though it pains me as a mom, I'm glad they're seeing with such clear vision so early, and happily.

There's something kind of Amish about this. We separate ourselves from this muddled Big Box culturally-separated midland who is repulsed we are close to our food source, while having such, such close, vibrant communities in either very rural or very urban areas... one foot in New York, Paris, Hamburg, one foot in Pamplin City, population 199-what's-wrong-with-them-they-can't-get-one-more-and-we-hope-they-never-do. Our Big City or No Desire To Be Close To A City friends get it... and for those middlin' people? It's time to let go, not waste the breath. They aspire to Anywhere USA.
Let 'em.

We are now doing something I never envisioned when I lived in Paris- having a dance party in our living room & watching our kids rock out to MC Solaar, ha. Here's one song that says so much...

Oh. One more thing: for you complete architecture and design geek-aholics- this just in via Core 77:
How to make your own CNC Machine in your kitchen for under $120.
Geek out, commence.