The Post Where The Beekman Boys Fall Madly In Love With Me.

I was teasing my friend Leah yesterday who LOVES some guys called The Fabulous Beekman Boys.

Apparently, these Beekman Boys have a method for taking out pomegranate seeds:


Seeing this, I immediately began to make fun of my dear sistuh.  I mean, THIS IS RIDICULOUS.

However, the next day, as my "I Love Pomegranates" 6yr old began to annoint her clothes permanently AGAIN with the tell-tale stains (and we have three more pomegranates to go in this house), I thought I'd give it a try.

In honor of my sistuh Leah, I slapped the heck out of those pomegranates and incorporated the seeds into tonight's dinner: 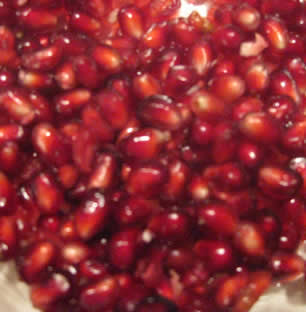 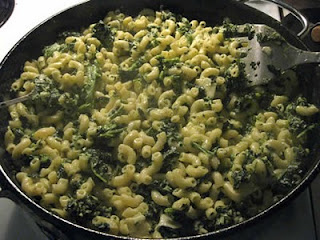 Boil pasta (I used elbows) until al dente, while, in a large pan, you simmer collards, sliced into 1" strips, in a bit of butter, then add some broth to keep it soft & from burning. (You can also use spinach, if you like. And turn the temp down and add milk instead of broth, until soft... what. Do I look like I follow recipes, even my own?)

Once soft, to the simmered collards add sharp cheeses and soft cheeses (I used sharp cheddar, some butter, parmesean, a tiny bit o' sour cream)... toss in kosher salt (I like the size of the granules) and pepper to taste...

Toss the pasta into the pan full o' sauce, crack a fresh backyard egg or two over it, and stir wildly.  (Actually, in a pan, I let it sit a minute, let it get crispy on the bottom, then stir, until the egg is cooked yet it has bits of crispy goodness from the bottom in it. To each their own.) Add more sharp cheese to taste (I always do) until it's the right consistency.  You could even top it with a sprinkling of sharp cheese & broil it for extra mac-n-cheese goodness.
Shovel a big ole dollop of mac-n-cheese into a bowl.
Top each serving with pomegranate seeds, and serve.
Pretty! 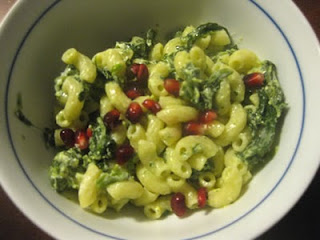 In the process of making dinner I thought I'd tease Leah about her pomegranate method on twitter.
I was very amused when those Beekman  Boys started talking to me.
Like any good sistuh, who loves her friend dearly,  I know it will drive Leah crazy that SHE'S THE FAN and I'm some dumb lady who totally didn't deserve the attention from them and I will now enjoy reminding her of their obvious adoring admiration of ME for the next year. Or two. 'Cause me and the Beekman Boys? We're like "this."

What are real friends for?

[Don't worry. I know I've put you through a lot with the composting toilet post and now this. Don't worry, green builders, a technical post follows next! ...Stay tuned...]