Who I am not 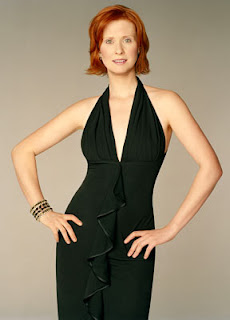 Thinking back to New York... and who I am not.

The first clue was when we strode into one bar and the bartender announced,
"Aaaaaaand here comes Sex In The City!" which I thought was a clever reference to the fact that we were several girls walking in together.

And people looked at me funny. I attributed it to the fact that I have pastel, cotton candy pink hair.

But when, as we walked in to a design party, the stranger grasped my hand, flustered, and told me he loved my work, V. turned to me: "He thinks you're CYNTHIA NIXON!"

I didn't know who Cynthia Nixon is, but immediately understood: One of those Sex In The City girls, and not even the one I would want to be!

Ok this is bad: I just inserted the Cynthia Nixon image into this post and Amy, who works next to me, burst: "OHHHHH MY GOSH YOU DO LOOK LIKE HER!"

But for some reason, every decade I somehow become compared to a mass pop culture person, and never ones I admire!

When I was ten everyone compared me to Marcia Brady. 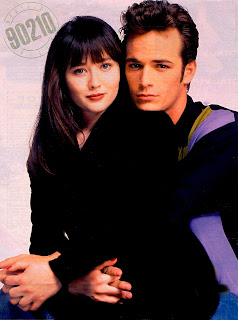 In the Nineties I was Brenda from 90210.
And now I'm some Sex In The City chick for the next ten years?

Can't people just look at me and think,
"Oh there goes some random weird girl who looks like... herself."

Sex AND the City. Geez, don't you even know what show you're on?