ICFF: Part Two of Off Topic Rambling On What I Did When No One Was Looking

Part One Is Here.

But now it's a new day, another afternoon at ICFF (er, I awoke a little later than I had planned), and an evening ahead with my dear friend V. It was raining; V. was running late, so I ducked into a store with gorgeous clothes in the window.
I mean, I was soaked.

No seasoned shopkeeper could NOT look me up and down and surmise: "There is no way this girl is a client of OURS!" I was wearing jeans and a black tank top. Oh no, this shop was filled with feminine, incredibly cut, celebratory clothes.

Instead of shooing me out, the manager and I struck up a conversation. I mentioned the dresses in the window had caught my eye- they were certainly costumes!

She explained the designer had created them for a ballet based on Marie Antoinette. They were incredible, and I was truly grateful for her kindness and enthusiasm to show a rumpled stranger the designer's beautiful clothes. 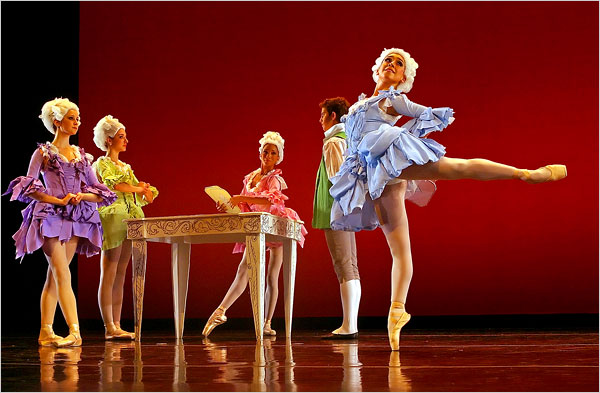 With that, I left to meet V., and we had a delicious late lunch at Macelleria. I went to get my bag, and when I returned I found V. chatting with a nice man eating at the bar. She introduced us; and for some reason his name sounded oddly familiar, as if I had just seen it... ?

We spoke about the ICFF, green building... he liked my hair... as we turned to leave I noticed the book on Marie Antoinette by his side... and I realized where I had seen his name- it was on the shop I had just left! "Ha, I just left your store! I was wondering why the name Charles Nolan sounded so familiar!"

It was late afternoon, but the Meatpacking Design Week Parties weren't to start for at least another hour so we headed over to Soho House for a nice Bloody Mary.

We lounged around awhile, and then it was time to head out for another evening of fun.

But that tale will have to wait- until later tonight!